Are you in a situation where you are forced to remain anonymous on Twitter, but still want to put across your point? Sending an Anonymous Tweet is a way out. It lets you tweet anything you want without you being associated with the tweet. ShhTwitter is a new service which lets you Tweet anonymously. 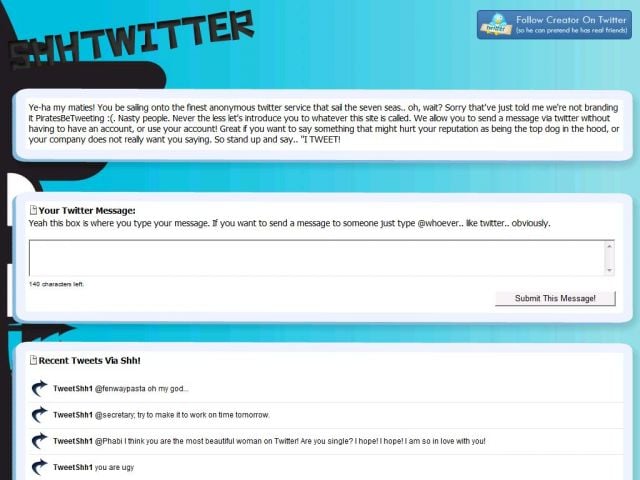 Where it’s a HIT?

ShhTwitter allows you to send a message via the micro-blogging website without having to have an account, or use your account. A couple of days back, US Open officials warned the Tennis players against tweeting during the tournament, which I feel is stupid and lame (Roddick feels the same as well!). So, now the tennis players can start using ShhTwitter and vent their ire without harming their reputations!

Where it’s a MISS?

Twitter is already filled with spam and spammers. Now it will get worse. I am not sure till when Anonymous Twittering with ShhTwitter will be active. Twitter cannot afford to ignore the service using its API, potentially helping spammers.

So, use it to your advantage till the service is active.

Was this article helpful?
YesNo
TechPP is supported by our audience. We may earn affiliate commissions from buying links on this site.
Read Next
Best Ways to Save Twitter Threads in 2022
#twitter tip

Search by Email: 5 Best Tips to Find the Person Behind an Email Address