Cricket lovers all around the world can rejoice the news that they can now watch live streaming of IPL Cricket online via Youtube! BCCI has partnered with Google to take IPL 3 to many more people around the world through the most popular video streaming website – Youtube!

For the uninitiated, IPL is an acronym for Indian Premier League, which is a popular cricket league on the lines of NFL and EPL involving professional cricketers all around the world. The IPL enters the third season in 2010 and there will be a total of 59 matches spanning over a a 44-day period starting March 2010.

During IPL 2 (in 2009), matches were planned to be streamed live via the official website of IPL, but it was a major failure with people complaining the quality of streams to be below par. Luckily, this time around, all the matches of IPL 3 will be streamed live on Youtube’s Official IPL channel – IPLWillow!

What does IPL 3 Live streaming deal means for Youtube? 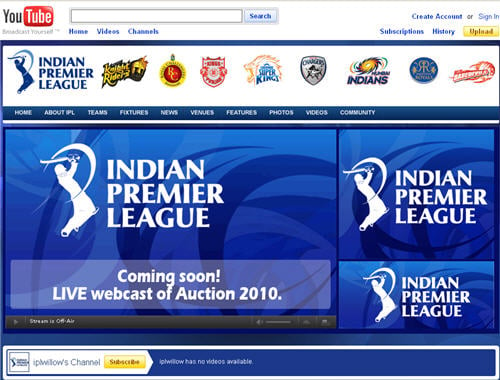 This will be the first time ever, any major sporting event will be broadcast live online on Youtube. Cricket, being a popular sport only in few countries like India, Australia, and UK, I believe this is the right step by Google to test the preparedness of Youtube to be the official online broadcaster of other major sporting events like Olympics & FIFA World Cup!

From BCCI’s perspective, it will help them to take the ever-growing game of Twenty-20 cricket to many more people across the world through Youtube. However, it’s not clear if the rights have been sold for a specific period of years to Google or whether it’s a revenue-sharing deal.

Just in case if it is not clear for you yet, you can watch IPL 2010 cricket live streaming on Youtube at absolutely Free of cost!

IPL 2022 Live Streaming: How to Watch IPL Live in India, US, UK and Others
Read Next