Just a few days before its official debut at retail stores, BioWare’s Mass Effect 2 has become widely available on file-sharing networks. This is a shocking news really. The leak has resulted in massive piracy as more than 300,000 gamers have either downloaded or are in the process of downloading a copy of the highly anticipated game via BitTorrent. 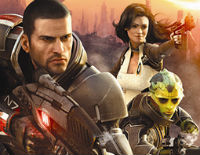 Mass Effect 2 is scheduled to be released on Tuesday, i.e 26th Jan 2010 in America and just 4 days before its official release, it was leaked on to the torrent websites for free download. Both the PC and Xbox-360 versions are available and being downloaded in full swing. This is really a shame and a huge loss for the gaming industry. TorrentFreak reports that the PC version of the game is about 14GB in size, while the XBOX 360 version is about 13GB.

This has come at a time when the very existence of bit-torrent websites is being questioned and so many people trying their best to bring out the positives of the peer-to-peer technology.

All purchased copies of Mass Effect 2, developed by BioWare and published by Electronic Arts, will come with a ‘Cerberus’ Network Card. The card is required to download in-game items and new missions that will become available when the game is officially released, but it’s possible to play the game just fine without it.

A word of caution though – may be the leaked version works on your modded xbox, but you must remember what happened last year when Forza Motorsport 3 was leaked on torrent sites and later it was revealed to be a prank by Microsoft and Turn 10 to brick modded Xbox 360 consoles. Be safe. Stay safe. Purchase original games.