Few of the thousands of TechPP readers were complaining about loads of iPad related news off-late. We just couldn’t help it! Now, for a change we have something to write other than iPad, but not completely though! The iPad alternative, HP Slate’s specs and pricing have been leaked. And this time it looks for real.

There are 10 other so called iPad killers waiting in the wings, but none of them have managed to gather enough interest as HP Slate. This Steve Ballmer backed tablet was always known to be running on Windows 7 OS, but the latest leaked document from HP seems to provide additional details about HP Slate and hence a better comparison with iPad.

The baseline model will cost $549. The Intel Atom Z530 processor will give the Slate about 5 hours of battery life, which is quite bad, considering that the iPad offer about 10 hours. There will be a $599 version that has 64GB of storage. 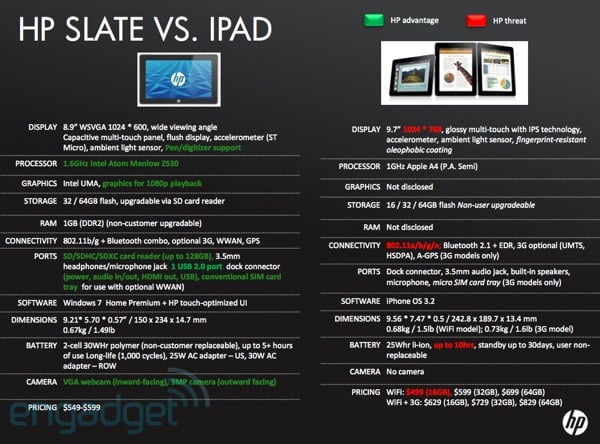 Was this article helpful?
YesNo
TechPP is supported by our audience. We may earn affiliate commissions from buying links on this site.
Read Next
Want to make your 32 GB iPad a notebook? Grab these five accessories!
#apple ipad #HP slate #Windows 7