Internet Censorship is turning out to be one of the major problems in some parts of the world, mainly China, Iran & Australia. They use some filters to block specific information on the web from their citizens. Not just countries, internet censorship is common in schools, colleges and work places.

At TechPP, we have previously written many articles to help people bypass internet censorship and access blocked websites. Some of them are –

As always, I would like to tell you guys, there is no sure way to bypass internet censorship, as the tricks/tweaks we suggest are only as good as the intelligence and knowledge of the network administrator. The latest tip is suggested by Martin which involves usage of the HTTPS Google Webcache extension for Google Chrome, which currently breaks most filtering systems by linking directly to the https version of Google Cache results. 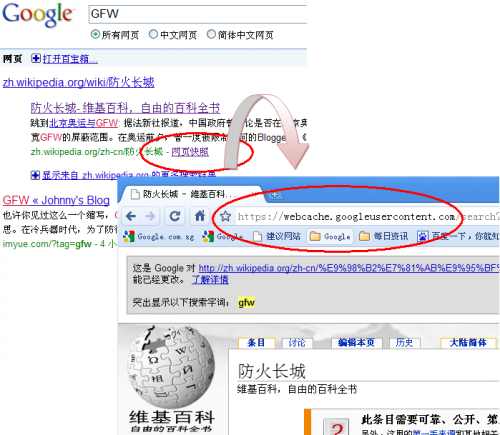 A search on Google not only displays the link to the websites that are linked in the search results but also to cache results which are stored copies of those websites on Google servers. The standard link to those cache entries is a normal http link which is a very popular (and hence known) method of bypassing internet censorship in China and elsewhere. The https version, which one can test by simply adding the s to the url, does not seem to be blocked currently. The extension for Chrome basically rewrites all Google Cache links so that they automatically point to the https version.

It is very likely that those links will be added to the filter eventually though. It should also be noted that this only works for pages that appear in the search engine results.

Was this article helpful?
YesNo
TechPP is supported by our audience. We may earn affiliate commissions from buying links on this site.
Read Next
How to Fix Google Chrome Translate Not Working
#access blocked websites #china #chrome extensions #google chrome