The iPhone dev team have released RedSn0w 0.9.6 beta 1 for Windows to jailbreak iOS 4.1 on iPhone 3G and iPod Touch 2G. If your iPhone 3G relies on Ultrasn0w unlock, stay away from this Redsn0w release, as it updates your baseband to the latest version, making it impossible to unlock (for now). 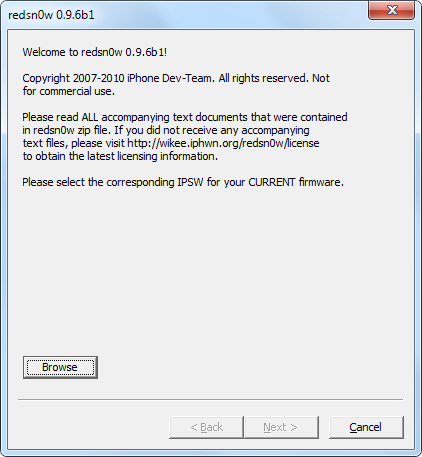 This is a beta release of redsn0w for the iPhone3G and iPod Touch 2G at FW 4.1 or 4.0. It uses the same pwnage2 DFU-mode exploit that we’ve been using since the 2.x days. It does not include the SHAtter exploit developed by pod2g. Nothing new is revealed to Apple with this jailbreak.

if you have an “MC” model of the ipt2g, your jailbreak will be tethered…sorry! (Consider rolling back to a FW supported by jailbreakme.com or spiritjb.com)

The instructions to jailbreak iPhone 3G and/or iPod Touch 2G with iOS 4.1 on Windows remains exactly same to what we had written for Mac version. Anyway, here is a brief guide to help you with the same.

6. Now click next and Redsn0w 0.9.6b1 will prepare data for jailbreak.

8. Power off your iPhone 3G and connect it to computer, only then click on next button of Redsn0w 0.9.6b1

10. Now just wait until Redsn0w completes the rest of the process. Once done, your iPhone 3G will restart automatically and you will find it jailbroken with iOS 4.1.