These are just some of the many weird status updates from female Facebook users we are seeing in the last couple of days. If you are wondering the reason behind these provocative status updates, it is because October is the “Breast Cancer Awareness month” and it’s all in support of the awareness campaign.

The “It” within the status refers to the purse and not anything else as you might have imagined. If you didn’t get the link/idea yet, don’t worry. We didn’t get it either. But the idea of the grass-roots effort seems to be that the sexy-yet-enigmatic updates will encourage women and men to think about breast cancer, according to Time magazine. 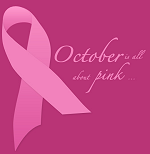 Facebookers have been known to adapt weird status update memes. Last year, we had seen one viral campaign where many women updated their status with just the color, which was later found out to be the color of their bra. The other one was the Celebrity Doppelgänger week where people changed their profile pictures to a celebrity lookalike’s pic.

We are not sure if these provocative status updates helps create the awareness. Many are embracing it anyway. We would suggest a simple pink ribbon though. At least everyone will know what it means.