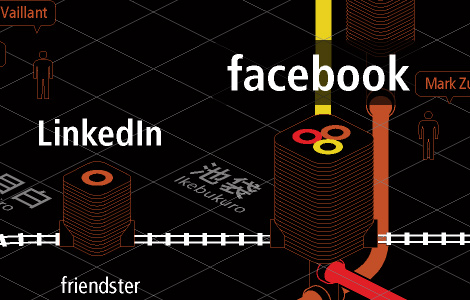 “Stats don’t lie” is a popular belief and it is true specially when the data we have is comprehensive and accurate. The interests on the internet are dynamic and constantly change. Who, other than Google Trends, can help us look back and understand how the interests have fared and changed over the last few years?

This is Part 1 of the two part series. Some of them are bound to take you by surprise, I am sure!

Let us start off with the social networking trends. They are the “blue-eyed-boys” of the internet and the hottest trends too.

No surprises over this one. Ever since it was launched in 2007, it has consistently grown and the best part is that it doesn’t appear to have peaked yet. So expect the growth into 2011 and beyond. 600 million users and growing.

Myspace had it all in 2007 and well into 2008 as well. Enter Facebook and Myspace started slipping and it is still doing so now in 2010. Will it have a second chance? I don’t see one anyway.

One of the latest entrant into the social networking space, twitter has its share of ups and downs, but has managed to keep up the interest and growing consistently over the years. But has it peaked yet?

This one will be a surprise for many who had counted out Orkut and kept it out of contention for the past year or so. Though it seemed to have peaked out in 2007, it still manages to keep the interest intact, thanks to Brazilians and Indians.

Linkedin is a classic example of consistent growth. Just like Facebook, it hasn’t peaked out yet and we expect it to grow well beyond 2011. Keep going!

Wordpress may not be counted as a social networking service, but we will include here since blogging is very much a part of social media and is constantly growing, as we can see in the Wordpress’ trend above!

Google’s Blogger platform is the one which revolutionized and popularized the Blogging. Ever since Wordpress took off, Blogger has had its ups and downs as indicated in the trend above.

Next up, we will see how the mobile phones / mobile tech have fared over the years.

As you can see, iPhone has consistently grown over the years, but the buzz is much more whenever a new model is released and then the interest wanes off, as it has right now. Let’s wait for iPhone 5!

Is this the reason for the waning interest of iPhone? Android started late, but it picked up a great deal in the last 6 months or so and doesn’t seem to have peaked as yet.

Contrary to popular beliefs, interest about BlackBerry hasn’t gone down a great deal. RIM is surely facing the heat of the competition in recent times, but has managed to keep up the buzz somewhat.

No surprise in this front too. Nokia has failed to grow as a brand in the last few years and that is exactly what the trends show. It has been stable with occasional bursts here and there.

That’s it for Part 1 of the web trends series. We shall look at Tech companies and others in Part 2.