Do you want to watch live TV broadcasts in high definition on your iPad, iPod touch, or iPhone without installing a hardware like Boxee or Slingbox? Live sports, live network shows, live news and even live movie streaming. That is what FilmOn provides for your iOS device. 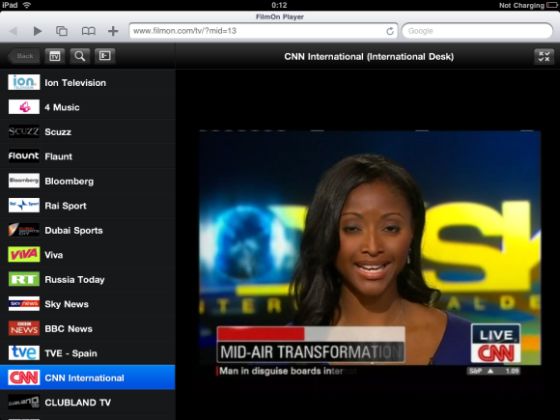 FilmOn is a free, high-quality TV streaming service that works on computers, iPads & iPhones (for now). You can go and watch high-quality, live streams from the major networks (Fox, NBC, etc.), CNN International, Bloomberg, Russia Today, Dubai Sports, and even some adult content!

TV Piracy isn’t new at all. But what makes FilmOn different is that it is backed by a billionaire businessmen, Alki David, who claims the service to be completely legal! Here’s how FilmOn works. The company is rebroadcasting local TV channels from Los Angeles. That includes the local affiliate stations for ABC, CBS, FOX and NBC.

The TV networks have already taken note of FilmOn, so expect the company to get sued to the oblivion soon. But that is not the intent of the post. The intent is to showcase the technology behind this service which is top class. 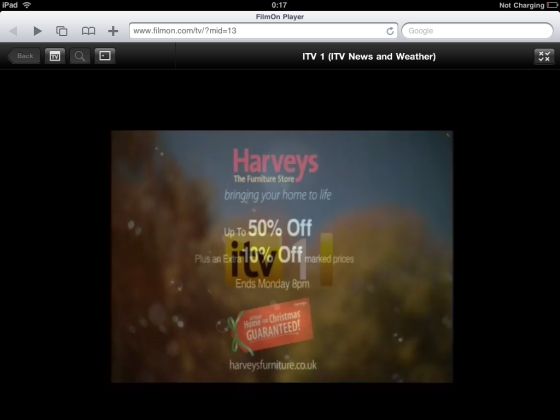 Having known that Apple will never let in a shady app, the developers have built a web app for streaming live TV on iOS devices. The website works really well and the content is truly High Definition. Once the web site loads you’ll see a list of available stations. Click on one and video starts playing almost immediately.

FilmOn also works on your computers, but that would require you to install an app, which isn’t as comfortable as it would be on an iPad. Though the website doesn’t work as expected on Android & Blackberry devices, FilmOn insists they will make it work on all mobile platforms very soon.

FilmOn was initially deemed to be a Free service, but now the web app asks for $10 per month subscription fee for unlimited live tv in high definition. But it does let you check out each of the channels in its kitty by playing them for a few seconds.

FilmOn has a huge task at its disposal – of fighting all those copyright infringement claims, but let us enjoy while it lasts!

Was this article helpful?
YesNo
TechPP is supported by our audience. We may earn affiliate commissions from buying links on this site.
#watch TV online