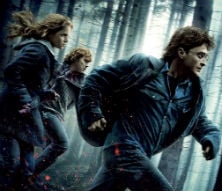 The Part 1 of the movie Harry Potter 7 – Harry Potter & the Deathly Hollows has been leaked on the torrents much before the official premiere, which is scheduled for this Thursday, 18th Nov 2010.

Before you start cussing (or rejoicing, as the case may be) you need to know that Harry Potter and the Deathly Hallows torrent contains just the first 36 minutes of the movie as revealed by Torrent Freak

Released by the group iNK, the leaked copy is not a usual DVD screener. Yes, the watermarks and other screener features are there, but instead of the full film the leaked copy only covers the first 36 minutes of the highly anticipated release.

Harry Potter films generally generate quite a lot of buzz on BitTorrent as well. Last year, when Harry Potter 6 was released on torrents, the movie was downloaded more than 8 million times. It is expected that the new film will eventually be downloaded just as much, or more.

The rumors making rounds suggest that the leak is deliberate since only a partial screener is made available. If the first half hour is compelling enough, people will have to go to the theater and pay for a ticket to see the rest. Warner bros though have released a statement saying

“This constitutes a serious breach of copyright violation and theft of Warner Bros. property. We are working actively to restrict and/or remove copies that may be available. Also, we are vigorously investigating this matter and will prosecute those involved to the full extent of the law.”

If you are really a Harry Potter fan, wouldn’t it be better to enjoy the movie in theaters? Specially since there is 3D version coming as well.

Was this article helpful?
YesNo
TechPP is supported by our audience. We may earn affiliate commissions from buying links on this site.
#harry potter 7