It’s that time of the year when movie buffs all around the world sit back and wait to see their favorite movie stars getting awarded. Watch the Oscar Awards 2011 live on Sunday, February 27, 2011 at 8pm ET/ 5pm PT. The 83rd Academy Awards, also known as Oscars 2011, will be held live at the Kodak Theater in Hollywood, L.A. and will be televised on ABC. Actors James Franco and Anne Hathaway will co-host the ceremony, marking the first time for each.

The King’s Speech received the most nominations, twelve. True Grit followed with ten and then The Social Network and Inception, with eight each. Toy Story 3, the highest grossing film of 2010, became the third animated film to be nominated for Best Picture; it is also nominated for four other awards.

The presenters for Oscars 2011 include Halle Berry, Sandra Bullock, Tom Hanks, Hugh Jackman, Nicole Kidman, Jude Law, Oprah Winfrey amongst others. Even the performers list is impressive. Mandy Moore, A. R. Rahman, Gwyneth Paltrow, Zachary Levi and others will be performing live at Oscars 2011.

If you cannot catch up the Oscars 2011 on TV, you can Watch Oscar Awards / Academy Awards 2011 Live Stream Online. Some links to the exact streams won’t be available until right before the ceremonies begin. I’ll be updating this list right up to the event so be sure to check back. 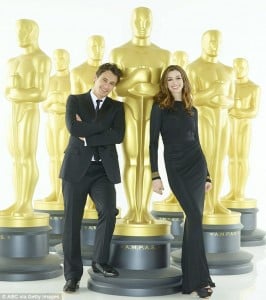 6. APLive Facebook page – You can watch the Oscars 2011 live on Facebook. Need to be a fan of APLive in order to view the live stream.

7. Watch Oscars 2011 Live online for free on atdhe – ABC live streaming page of atdhe. Check your local laws for the legality of this website.

8. Watch Oscars 2011 videos online for free on Hulu – If not the live streaming of the awards, you should be able to find some exclusive video clips of Oscars 2011. US only.

11. Watch Academy awards 2011 live videos online for free on TVGuide – check this only if you are looking for videos of Oscar Awards winners and nominees once the awards ceremony ends