Internet Speeds and Costs Around the World [Infographic] 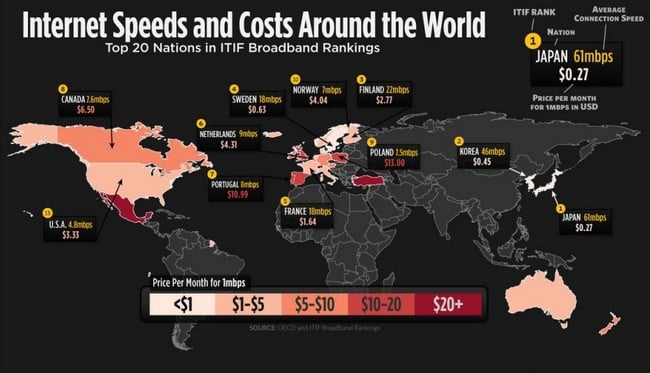 A few months back, we had seen a detailed infographic from Pingdom about the average internet speed across the globe. That data was based upon the information provided by Akamai, the world’s largest CDN provider. Now, Dando vueltas a lo de siempre has come out with a similar infographic based upon the data sourced from Internet World Stats Broadband Penetration, which lists out the average broadband speed and costs of Top 20 nations.

The infographic lets users in these 20 countries know and compare their broadband speed and cost with their peers across the globe. If you’re a US citizen you likely have an average internet access speed of 4.8 mbps and you pay a little over $3 per mbps. If you are in Japan, you are likely to have a whopping net connection of 61mbps costing just about 27 cents per mbps (*evil*)

I don’t think I will be able to sleep tonight after going through these figures. Here in India, I pay $31 for 4mbps with a download limit of 20GB :|

[via] HowtoGeek
Steps Involved in Serving the Latest Android Update to Your Smartphones [Info...
Read Next