Facebook is a social phenomenon. This social network appeared when it already seemed that the market was agglomerated and there wasn’t room for yet another one. But, in the end, Zuckerberg managed to create a team that was capable of giving shape to his imagination of how the company should be. And his ideas were quite brilliant.

In 7 years and a bit, the membership grew to 600+ million users. At this moment Facebook rightly holds the second place of the most visited websites in the world. How many users will we see after 10 years? 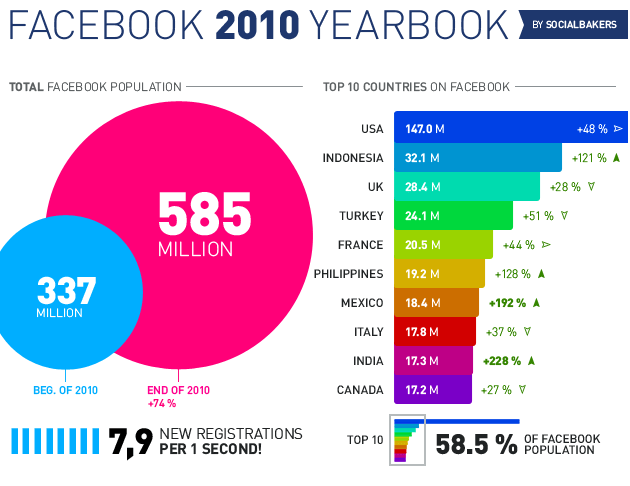 The stats that we see are crazy: we can see a 74% growth in one single year!

An amazing moment in the evolution of the company was when the giant, Google, felt Facebook’s breath on its neck. This happened in a week of March 2010 (HitWise Data), when Facebook surpassed the mammoth corporation and became the most visited website in USA. 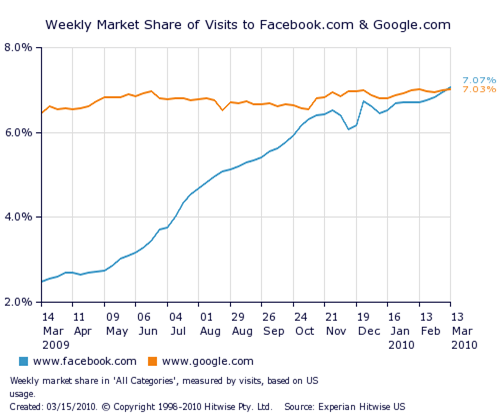 Did the initial investors of Facebook think this was possible? If, in 2010, the membership grew by more than 70%, it is fair to assume that the growth won’t stop in 2010 and will “recruit” new members. Latest data show that we have almost 2 billion Internet users; this means that the American company has almost a third from the total number of Internet users. It is logical to assume that the Palo Alto company has targets and objectives established at the beginning of each year. If the previous year growth can be sustained, then Facebook could “conquer” all Internet surfers in less than 5 years.

It is not just a social phenomenon; it is more like a trend or, for some, a must-have. When I make a new acquaintance, the first thing I’m being asked is – “Hey, are you on Facebook?”. I almost feel “embarrassed” by being a part of this giant network. When I created my Facebook account, I remember doing this because I had the feeling it was an “elite” network and a way to avoid MySpace, Hi5 and many others.

Now and then, Facebook “remembers” that their policy and business model is based on friends that you really know and about real connections; not random digital wandering. You can’t be friends with anybody you want to, just with those who’re giving you the acceptance to do so.

Is this the reason why Facebook is so popular or this is just a mask they use to grow their membership even more?

How to Reply to a Specific Message on Instagram on Android, iOS and Web
Read Next