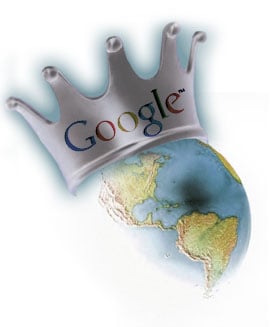 Guest post by Daniel Divyakumar H, of The Indian Geek.

A few months ago, Technically Personal received an anonymous “Guest post” titled The Google Deception. Since Raju mentioned that he had received an “anonymous” post on twitter, and that it didn’t look like spam – my curiosity was piqued. Who in their right minds would write an entire article for a decent blog such as TechPP, and then not want to affix their name to it? When I read the article, I kind of understood. It reads more like the half-demented lazy thoughts of a scatterbrained non-geek. So I set out to right the wrong, and debunk every thought or rhetoric posted in the article. Instead, I ended up looking at the main issue – what is Google’s game, and how are they planning to achieve it? I believe that Google plans to take over the world. I firmly believe it. I also believe that they are not evil. If they really do end up “taking over the world”, then they will definitely fall prey to corruption and other vices which would make them evil. But currently, no, Google isn’t evil. Here are the top five reasons that I see validating my semi-prediction that Google would take over the world.

Seriously, when was the last time someone you knew used bing.com or yahoo.com for search? I know that Bing and Yahoo are among the top-visited sites in the world but what I can’t understand is how, or why. Almost every single person I know uses Google.com for searches; most use the Omnibox in Google Chrome, so they use Google without actually going to Google.com. This is the number one vehicle that Google has in its arsenal to take over the world – mindshare. Back before Android was announced by Google in 2007, people wanted Google to launch an OS. The debate was always Apple vs. Microsoft in the computer/OS wars. Google was gaining mindshare and becoming a giant without even entering the arena of this competition. When it did, with projects such as Android and Google Chrome, it did so with a bang. Currently, most geeks are split between Microsoft and Apple and Linux; but almost all universally love Google. By non-fighting, Google seems to have already won the fight – in the hearts and minds of people.

Fancy title for this weapon, I know, but I’m talking about projects like Google Voice and Google Maps Navigation, which help Google usurp the market-share holders in a certain segment, and then destroy their revenue. Let’s look at Google Voice first. For the uninformed, Google Voice allows you to get a US-based number (if you’re located in the US) which can be associated with all of your numbers, and when this number is called, all your associated phones would ring. Towards the middle of 2010, Google announced that they were awarding free calls to phones in US and Canada till the end of 2010. They announced a while ago that they are extending this till the end of 2011. Think about it. Every single person in the United States now gets free voice calls over the Internet, to any number in the United States. I can almost imagine the faces of the guys at the top of AT&T, Verizon, T-Mobile and Sprint – pale with fear. Even if they lose 10% of their revenue, that’s a huge chunk of call volume that they’re losing. Think of what would happen if Google expands this to other countries in the world. Yeah, everybody would start using Google Voice.

Let’s look at Google Maps Navigation now. When Google announced this long ago, you could almost hear the empire of voice-guided navigation built by companies such as TomTom crumbling. Thankfully (for the navigation companies) Google hasn’t expanded this outside the United States or the United Kingdom. What if they expand throughout Europe? Europe is TomTom’s leading market. Who would pay TomTom for a device costing about $100 and then monthly or yearly service fees, when Google provides this integrated solution with the Android Operating System? This launch by Google forced Nokia to make turn-by-turn navigation completely free on Ovi Maps. If you live in the US or the UK, this could be a major deciding factor in purchasing an Android phone.

So, by destroying the livelihood of the telecom operators and the navigation service providers, Google is gaining huge inroads into markets that were completely new to it previously. That’s a huge weapon. It will definitely help in taking over the world.

Billions of bytes of information are transferred everyday via e-mail. When Google launched Gmail back in 2004, it was with a huge bang. 1 GB of e-mail storage. I’ve never run out of the ever-expanding storage available on my Gmail account, and I still have mails from 2004. If you look at it shrewdly, Gmail was Google’s first big blow outside of it’s traditional search arena. It changed the world and negated the choke-hold that Yahoo! and Rediffmail (in India) had on free-email users. Once you have a Gmail account, you tend to start using Google services more and more. Then Google unleashed Google Apps. Even a 1000 word-essay would be insufficient to try and explain the ease-of-use and the functionality that Google Apps provides. Even Engadget, one of the best tech blogs out there, use Google Apps. And yes, the basic edition is free to use for up to fifty user accounts. Basically, Google Apps provides most of the services offered by Google, as private services for use on your own domains. So if you start your own website, and you want to have professional e-mail addresses and Intranet communications, Google Apps can help you set it up in a flash. This cuts into the revenue of companies like Microsoft that have costly software such as Exchange. All the little companies/organizations out there don’t need to spend huge amounts of money to purchase the components necessary for an Intranet mail-server system based on Exchange. While Google Apps cannot completely replace Exchange and other similar services, it definitely has eaten into the revenue of such services. Think about what this means. If you’re an individual using Gmail, you’re a Google user. If you’re an employee of a company using Google Apps, you’re a Google user. Either way, you’re using Google. Which means Google gets to serve out more Ads. Bringing us to the next weapon in Google’s arsenal.

Where would Google be, if they didn’t have Ads? I’ve heard many ask that question. Truth is, we can’t say. Ads are Google’s revenue model, and it’s worked out pretty well for them. So much so that they offer up AdSense for blogs and websites to host these Ads, and make money from them. The amount of money made by AdSense users is a pittance compared to the amount of money Google takes per Ad. So with expanding services such as Gmail and Google Apps, Google expanded the number of users within the Google ecosystem who could be served Ads. By introducing the AdSense programme, Google ensured that even when you are outside the Google ecosystem, you could be served Ads. Ads, ads, ads. It’s an evil that we all (especially in India) have learned to live with, since that gives us free stuff. We prefer ad-supported versions of Games, if that means we don’t pay a single cent for the actual game. With it’s expanding Ad-delivery ecosystem, Google has ensured that content-gobblers (such as you, readers) and content-creators (such as Raju and other publishers) are all a part of it’s own revenue system. All these Ads and revenue creates a nice big bank account, that Google uses to go shopping. To do stuff like preload Google Search on OEM-based computers. Buy up small companies like Gizmo5 (the precursor to Google Voice) and AdMob (Ads for mobile devices). Or maybe, just maybe, take over the world.

How can I write a post titled “Why Google will take over the world?” and leave out the most important weapon in its current arsenal. Android maybe faulty, maybe buggy, maybe unusable for some non-geeks; but it’s here, it’s grown, and it’s staying for good. I’m not just talking about phones. Android on phones has taken off in a big way last year, with the introduction of several budget phones. But let’s not forget what’s waiting around the corner with Google TV and other similar projects. Once Google fully launches services such as Google TV, they’ve stopped being a computer company. They become a consumer electronics company – all without releasing/manufacturing a single hardware device in that market. Android will help Google as the main vehicle to realize it’s purpose of…. you guessed it – ruling the world.

This is a guest post by Daniel Divyakumar H, who works for Hewlett-Packard during the day and masquerades as the editor of The Indian Geek in the night, after co-founding it. All views put forth here are his own, and have no relation to the views of his employer – Hewlett-Packard, or of The Indian Geek website. For details and information about Dan, or the site, visit http://www.theindiangeek.com

Was this article helpful?
YesNo
TechPP is supported by our audience. We may earn affiliate commissions from buying links on this site.
Read Next
20+ Best Google Doodle Games You Should Play [in 2023]
#google #guest-post