AppShaker for Android – Shake to Launch Your Favorite App

Android is known for the customization and personalization of homescreen and apps. The ease with which one can add widgets and app shortcuts to their homescreens is surely enviable for Apple users. Android users normally add shortcuts of their favorite apps on their homescreens. But now, there is a quicker way to launch your favorite android app – AppShaker from Prodigen.

With AppShaker, you can select any installed application and shake your smartphone to launch the application of your choice! 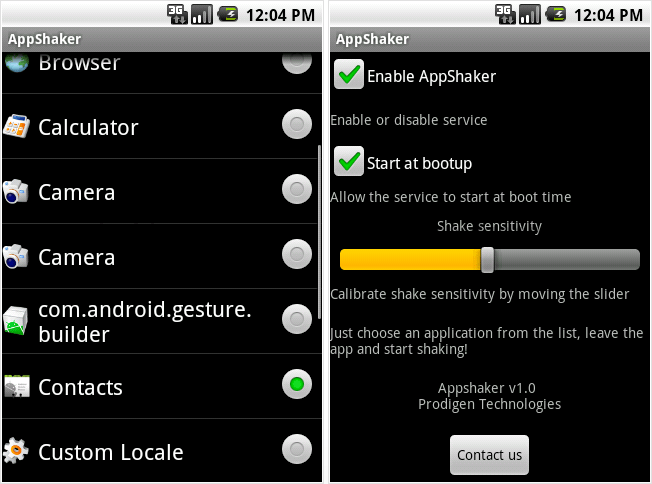 AppShaker is a very simple app which does exactly what it promises. The good thing is, it runs as a background service waiting for any potential shakes on your smartphone. It makes use of the accelerometer, which has become a standard feature of many android smartphones. You can even select and calibrate the sensitivity of the shake through the settings screen.

The developer claims that they have designed AppShaker to consume so less battery and memory, such that you will not even notice it running in the background! Apparently, the background service goes to sleep as and when the screen light goes off and when the screen is illuminated again, it wakes up from sleep and becomes active. That’s a neat way to conserve battery, isn’t it?

Android devices have pretty bad reputation when it comes to battery life and standby time. So, having yet another background service would mean even worse battery performance. Even Facebook app for android used to have “Shake to refresh” feature, which was eventually removed due to battery issues. I personally wasn’t able to test the optimization claims made by the developer, but was thoroughly impressed with the concept and it’s implementation. I can now open my phone camera app in a flash by just shaking the phone!

As a regular iPhone user, I miss this functionality in my iPhone. There is a namesake app on the iTunes appstore which is more about app discovery. The android version though is much cooler and surely deserves a try. Check it out and let us know your opinion.

How to set up your HONOR 9A and HONOR 9S and get your…
Change Your iPhone's Wallpaper to Your Favorite Images…
Seven iPhone Samurai: Seven of our favorite iPhones
Elon Musk’s Favorite Video Game is Available for Less than a…
How to use Back Tap on iOS 14 to launch Google Assistant (or…
Xiaomi Mi Watch teased ahead of its November 5 official…