Those who are familiar with Apple’s (or rather Steve Jobs’) keynotes would know about his stereotypical “And one more thing…” phrase which, in recent times, is the most expected, rumored and discussed part, even more than the actual keynote!

Steve Jobs usually starts his keynote by discussing the sales figures of Apple products and moves on to discuss about some new features or updates relating to the Apple products. He bluffs with some concluding remarks, thanks the attendees, turns to leave the stage, then turns back and says “But there is one more thing…“. More often than not, he is greeted with a huge commotion and cheers from the attendees, who are obviously expecting something big from Steve. 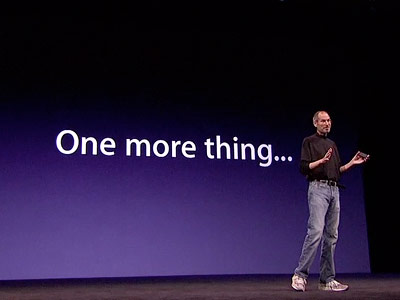 Steve Jobs will be kicking off WWDC 2011 in a while and below, I have tried to list down most of the products revealed as “One more thing…” –

12 years back, at Macworld Expo in San Fransisco, Steve Jobs made his first ever “One more thing…” remark when he announced the AirPort base station and the AirPort card.

The first ever MacBook Pro was announced as part of the customary “One more thing” by Steve Jobs at the 2006 Macworld Expo which succeeded the PowerBook series. Even the MacBook Air was announced like this at the end of Steve Jobs’ keynote at Macworld Expo in 2008. As you would expect, the new iterations of MacBook were introduced in October 2008 right after the introduction of new MacBook Pro series. A revised MacBook Air announcement was part of the “One more thing” remarks in October 2010.

The first iPod Shuffle was introduced at the 2005 Macworld Expo keynote wrap up. Later that year, in October 2005, Fifth generation iPod with video was announced! Incidentally, the event was titled “One more thing…”!

By 2007, everyone had started expecting a new generation iPod during the customary Music event during September. The “one more thing…” announcement at this event was the iPod Touch. In 2009, during one such music based events, the fifth generation iPod Nano with a video camera and speaker was announced.

The introduction of selling movies via the iTunes Store happened as part of the “One more thing” in September 2006. Surprisingly there was a second such announcement during the same event where Apple TV was unveiled. During the keynote of 2009 Macworld Expo, where Steve Jobs was absent due to illness, his deputy, Paul Schiller introduced the DRM free iTunes Music Store as a “one last thing”!

The beta release of Safari web browser for Windows was introduced in June 2007. FaceTime video calling was introduced for iPhone 4 during WWDC 2010. The last instance of “One more thing” was during October 2010, when Steve Jobs unveiled the new version of MacBook Air.

It remains to be seen if we will have any “One more thing” surprises during the WWDC 2011 keynote. We already know that Steve Jobs would be present for the keynote and he will be unveiling the iCloud service along with Mac OS X Lion and iOS 5. What we don’t know is if there will be a pleasant surprise at the end of the keynote. Let us wait and watch!

Was this article helpful?
YesNo
TechPP is supported by our audience. We may earn affiliate commissions from buying links on this site.
Read Next
How to Quickly Convert Images on iPhone and iPad Using the Files App
#apple #iPod #MacBook #one more thing #Steve Jobs #wwdc