The 3D revolution has seriously shaken the way in which we perceive technology. We now have 3D television sets, 3D smartphones, 3D laptops, cameras, game consoles and we should expect soon enough to see on shelves, the 3D tablets as these devices seem to be on the highest wave on technology nowadays. But have you ever stopped and asked yourself – how in God’s name 3D works? Ok, that might not be too hard to answer, but glassless 3D technology? Is 3D the start of a complete new technological age?

3D Technology: From Beginning Until The Glasses-Free Period

The History of 3D Technology

You think 3D is a recent discovery? It’s actually not. People started talking and analyzing 3D technology even in the 19th century, when Sir Charles Wheatstone described the process of stereopsis: ”the mind perceives an object of three-dimensions by means of the two dissimilar pictures projected by it on the two retinae”. In plain English, this basically means that two similar overlaid images project another one, more realistic for your sense of perception. 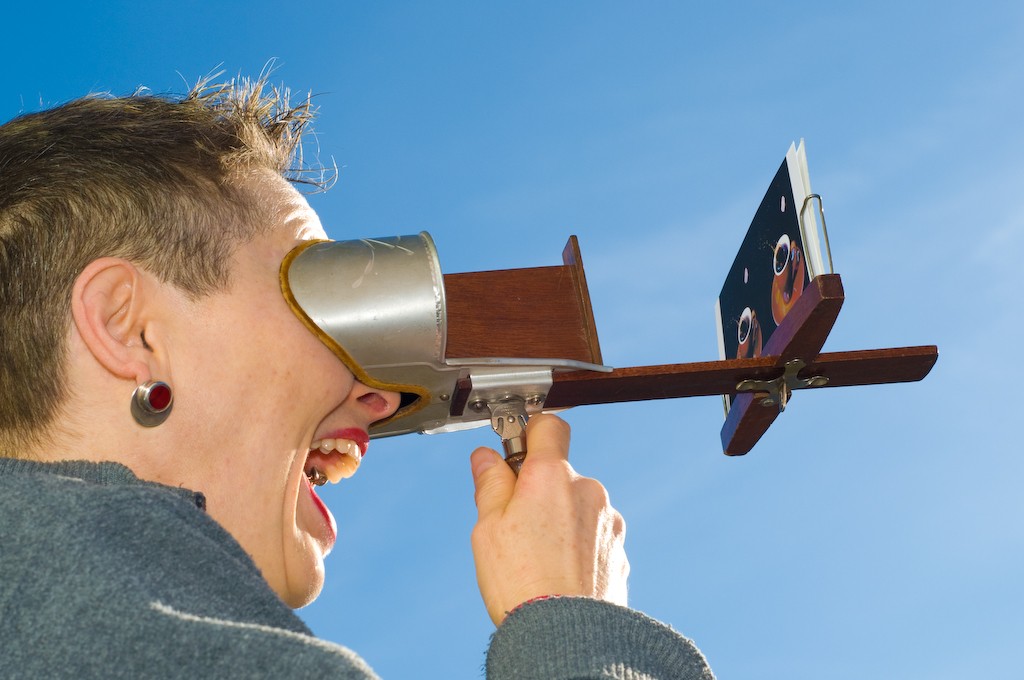 Why did the first, “old” 3D glasses had blue and red colors? Well, because it was easy for each eye to identify those two different images and then to overlay them. Each eye would get its own “point of view”, and the red and blue colors were used to separate the pictures so that in the end you could have a 3D environment. But, if you recall, the quality wasn’t so great; I even had headaches and it had a “ghost-like” aspect.

Another solution for high-quality 3D was to use polarized glasses which could orient the light in vertical or horizontal directions. One eye image could be projected on vertical basis and another on horizontal but it would get real blurry if you decided to move your head. That’s why they had to improve it, making the 3D to work on rotational polarity, instead of vertical it would be clockwise in one eye and instead of horizontal – counterclockwise in another eye. So that’s why you can now watch your favorite movie in 3D and move at your own comfort.

If you can afford it, you probably already have a nice 3D TV at your home and a pair of glasses to help you watch awesome 3D movies and even TV channels. Have you ever wondered how does it work? Mashable explains it simple and in plain words:

The glasses are synced up to your television and actively open and close shutters in front of your eyes, allowing only one eye to see the screen at a time. This sounds like a recipe for a stroke, but the shutters move so quickly that they’re hardly noticeable. These shutter lenses are made possible because of the refresh rate on televisions. 3D-enabled televisions have high image refresh rates, meaning the actual image on screen is quickly loaded and reloaded. Through the glasses, you receive one constant image instead of a flicker.

But how do they film 3D movies? The film makers need to sync the moment very good, the distance, the height and the angle so that it would seem that the movie has been made using real human sight, from two positions. As I understand it, it’s like having two cameras, one could represent the left eye when you close the right eye and another one could represent the right eye when you close the left one. In the end, 3D is all about recreating our natural vision and the trying to reproduce what nature has already done for us. 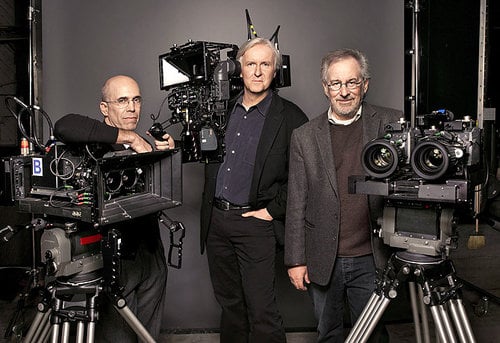 When it comes down to computer graphics that are used to make movies like Toy Story 3 or any other 3D animation, the creators have to make two different versions of each frame; with specific perspective for the left and right eye. The advantage is that it’s easier to synchronize the images but it takes more time to polish them.

The Next Step: No Glasses For 3D

We previously also wrote about Nintedo’s famous CEO and how rich this company’s history actually is. The Nintendo 3DS gaming console is a device that wants to be the forerunner of what the next step in 3D technology could be: no glasses. The glasses-free 3D gaming device has been released at the end of February, in Japan. 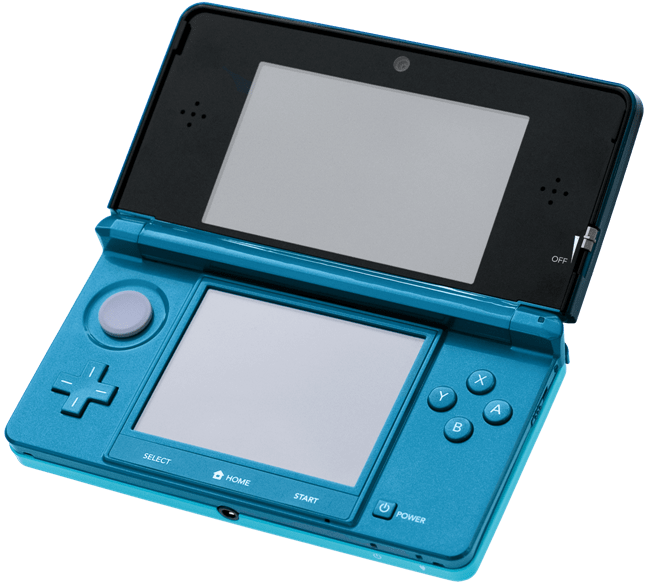 There are multiple ways for 3D to be viewed without the need for glasses. Tom’s Guide discovered that Nintendo 3DS uses a parallax LCD barrier made by Sharp. As WikiPedia points out:

a parallax is an apparent displacement or difference in the apparent position of an object viewed along two different lines of sight, and is measured by the angle or semi-angle of inclination between those two lines

The image below should make more sense. 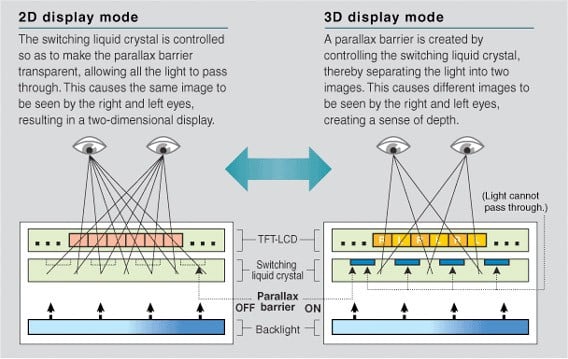 If the beginnig of 3D has been marked by the concept of stereoscopy, the 3D technology without glasses is scientifically called autostereoscopy. The above example with the parallax barrier used in the Nintendo 3DS also depicts how autostereoscopy works. Yet again, the glasses-less 3D technology isn’t something new and is actually 26 years old, being invented in 1985 by Reinhard Boerner at the Heinrich Hertz Institute from Berlin.

While parallax barrier seems to be the most efficient way to make 3D without glasses (if it weren’t, Nintendo haven’t sold more than 4 million units) there are other ways for 3D to be viewed without glasses. Gabriel Lipmann is the inventor credited with the principle of integral photography; a process that combines 2 arrays of lenslets to capture a 3-D scene. The image below should tell you a thousand words… 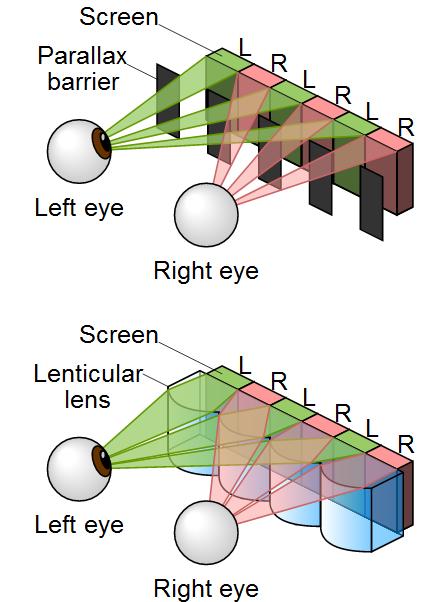 Do you notice the difference? Instead of the parallax barrier there are some concave lenses. The lenses have been slanted so that they could be in “harmony” with the substratal pixel grid. The lenticular technology has an increased level of brigthness than the parallax barrier and it also has wider viewing angles.

Integral imaging basically represents the improvement of lenticular technology but the processes that it has to go through to deliver a glasses-less 3D experience are pretty expensive, this being, so far, the single reason why it isn’t being widely adopted. The first complete method for integral imaging was the Integral Photography:

the lens array is used to both record and play back a composite three-dimensional image. When an integral lens array sheet is brought into contact with a photographic emulsion at its focal plane, and an exposure is made of an illuminated object that is placed close to the lens side of the sheet, each individual lens (or pin-hole) will record its own unique micro-image of the object

These are the main ways to make 3D experience become free of glasses. However, there are also other methods, not as efficient but still in testing:

The Future of 3D

A fresh report says that soon enough we will be able to rejoice even live transmission from, say, important sport events, without the hassle of 3D glasses and not be afraid again of noisure. Engineers have developed a four-camera system that could deliver us an incredible experience and that isn’t as far as you’d think. And it seems that the 3D glasses-free frenzy is only about to start as HTC upgraded their EVO 3D to a glasses-free model. What’s next, folks? 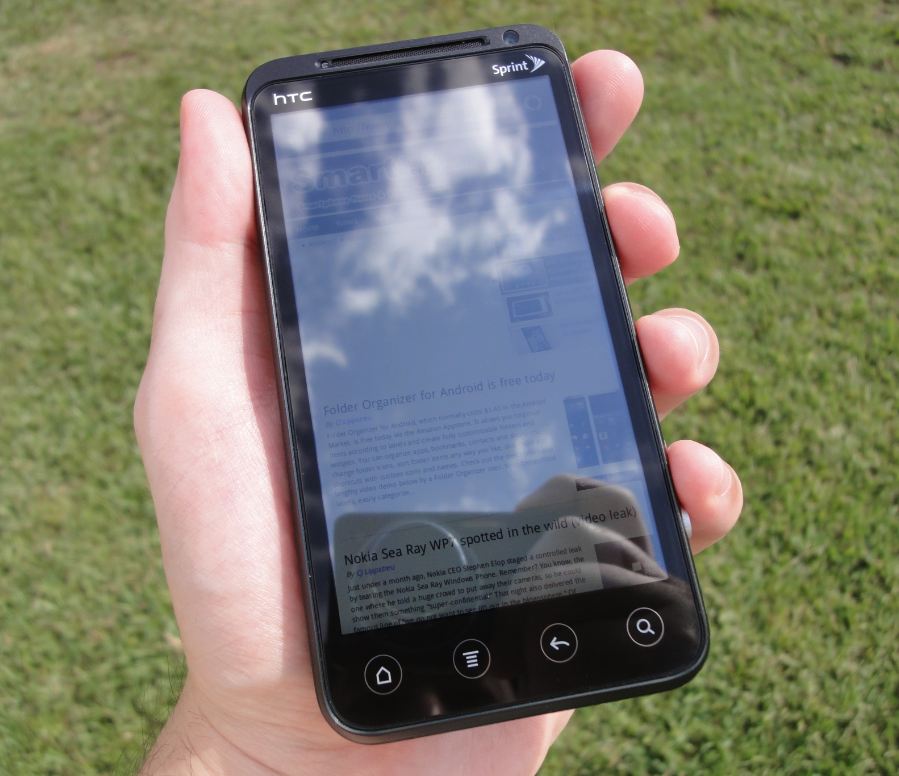 Looking at all these names, one could say – hey, why wasn’t 3D technology implemented much earlier and why are we still use these glasses? The answer is simple – an invention doesn’t necessary mean mainstream production or adoption. That’s why the 1985-2003 period is being referred to as the “rebirth of 3D” and from 2003 until now the “mainstream resurgence”.

By the way, today, Toshiba announced that their 3D glasses-free TV will be launched in Europe in December, this year for a price tag of 8,000 euros. 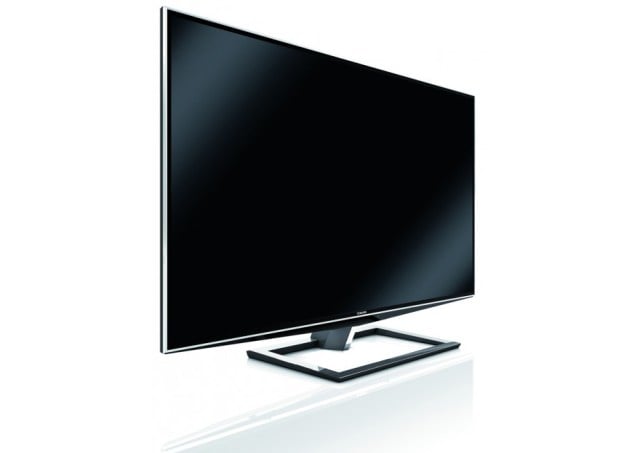 This means that Toshiba breaks the ice and we should expect much more models soon flooding the market for lower prices. More skeptical voice suggest, on the other hand, that glasses-free 3D TVs will not ready for commercial use until 2015. Take a look at the video below at what Toshiba promises with their glasses-free 3D TV sets.

Another interesting idea comes from who else than Sony.

Being in a resurgence means that the consumers are ready for new products as “the waters have been tested”. That’s why, in my humble opinion, I think that the future is indeed the one of 3D without glasses as we really don’t want to be disturbed by anything while silently entering the charming world of 3D.

Was this article helpful?
YesNo
TechPP is supported by our audience. We may earn affiliate commissions from buying links on this site.
#3D technology #nintendo 3ds