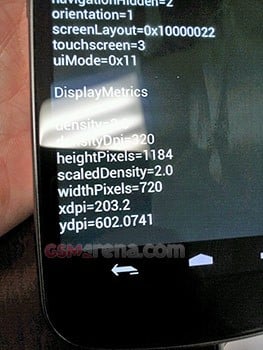 Many would consider it to be blasphemy to write and talk anything other than Apple iPhone 5 event on this day. But then we must alert you that another major announcement is due to come next week from Apple’s biggest competitor – Android. On October 11th, Samsung and Google will be unveiling the next flagship Nexus phone at the Samsung Unpacked event, tentatively named – the Nexus Prime.

The image you are seeing on the right is actually the first ever leaked photo of Nexus Prime, courtesy GSMArena. We can now confirm that the leaked image is indeed real and matches with the information we were getting from our highly trust-able source. And we have more details to share today!

But before that, here is what GSMArena had to say about the leaked image of Nexus Prime. The screen is 4.3″ Super AMOLED Plus with 720p HD resolution with a pixel density of 320dpi. But what we weren’t sure of, was the buttonless front panel as shown in the leaked image. Considering the fact that Nexus Prime will be running Android Ice-cream Sandwich which is based on Android Honeycomb OS and hence doesn’t depend upon hardware keys for navigation.

Our source says that the display is actually 4.65″ and not 4.3″ as claimed by GSMArena. Also, according to our source the display of Nexus Prime is qHD Super AMOLED, just like that of Motorola’s Droid Razr. We are almost sure that Prime will have Contour display much like its predecessor.

This is something which our source was always hinting about. Nexus Prime will have metallic rounded corners much like the original Nexus One. Observe the leaked image above carefully, specially the edges.

Let me make it clear that these two are our assumptions based on the past practices with Nexus devices. Going by that, the price of Nexus Prime should start from $599 (unlocked of-course) and the pre-orders might start the same day.

Also, our source hints about the possibility of the name of the phone being something other than “Prime”. He says that Prime was the code name and we might see a brand new name at the launch.

Surprise awaits – will it be Nexus Tab?

According to our source, we are in for a surprise on October 11th. And he says it’s “a great surprise”. Now, we aren’t sure what this great surprise will be, but what are the chances of seeing a Nexus Tab on next Tuesday? There have been many rumors about Google planning a Nexus Tab with LG in the past. Considering that Oct 11th is Samsung Unpacked event, if at all a Nexus Tab is announced, it has to be in association with Samsung. In case the surprise is not about Nexus tablet, what else do you think it would be about?

Note: We have some more details about Android Ice-cream Sandwich, which we will be posting about very soon!

Was this article helpful?
YesNo
TechPP is supported by our audience. We may earn affiliate commissions from buying links on this site.
Read Next
NothingOS Made Me Realise How Much Overrated Pixel UI Is
#android #Android Ice Cream Sandwich #Breaking News