Some years ago, we wouldn’t even suspect that Google will jump into the competitive market of online browsers. For the tech savvy, Firefox was the best solution before Chrome appeared on the market; Internet Explorer being considered the choice of those that don’t value too much their security or amateur users. There was and still is the Opera browser and for Apple users, the Safari browser, that is constantly updated for an obvious reason – so that Apple users wouldn’t have the smallest reason to switch sides with another browser.

Chrome Browser: How it all Started

We can say for sure that the Chrome Browser is still very young and has all “its life” ahead to crush its competitors. Firefox, for example, was launched in 2003 and Internet Explorer has been the default Windows browser since 1995, and since then, it still holds the first place in the web browsers share worldwide. But who knows more about the web than Google itself?

The engineers at Google built the Chrome browser on the WebKit layout engine. It will surprise you to know that the same layout engine is being used in the Safari browser, which is also known for its fast response and speed. So, in terms of internal architecture, Google’s Chrome and Apple’s Safari are not just competitors but “brothers”. The first stable public version of the Chrome browser was made in December 2008, which means that Chrome’s “life” actually started in 2009. It seems that the team at Google started the work at the Chrome OS system back then, as well. Since the launch, even the Chrome logo has changed; we all know how much Google values the simple looks.

Did you know that Sergey Brin and Larry Page actually hired some developers from Mozilla and they built together a demonstration of what Chrome is now? They did this in order to persuade Eric Schimdt, Google’s CEO at that time, who wasn’t too convinced that they need to enter the “bruising browser wars”. One year after the public release, in December 2009, Google launched the official versions for Mac OS X and Linux, as well. Thus, the release was complete.

It seems that the WebKit layout engine is the main thing that makes Chrome so fast; and you’ll be surprised to find out that it was actually suggested by the Android team. There was even know-how taken from the engineers at Adobe in the making of Google’s Chrome, not to mention that Chrome has been tested a lot before even the first demo was released. Just take a look at the graphic below to see how fast Google Chrome has climbed up the browser ladder. 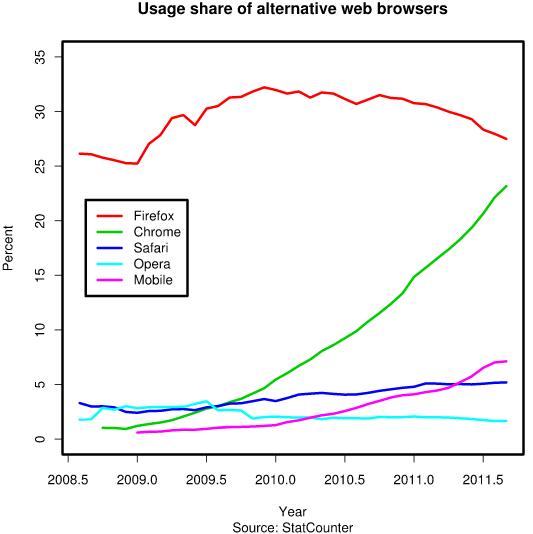 Indeed, there are some incredible numbers that we see in this graph. Guess which other browser has maintained a steady increase in its market share? That’s right, Safari, based on the same WebKit like Google’s Chrome. As you can see, Chrome has gained in one year more than 20% of the market share, which is actually a huge number in such a short time. If we were to believe these stats , then it means that in less than 2 years, the Chrome browser has been adopted by almost 500 million people. Where will Chrome be after 2 more years?

You will see dozens of graphics and statistics that will indicate you different numbers. Before jumping into conclusions, you should know a quote that I like a lot

“Statistics: The science of producing unreliable facts from reliable figures”

So, going by that logic, I’ll ask you a simple question: what browser are you using and why? Feel free to answer in the comment section below.

The Battle of Numbers

Find below a graph made by Wikipedia, it shows the share of browser users that have visited Wikipedia (since Wikipedia is one of the most visited websites in the world, we can consider them a credible source). 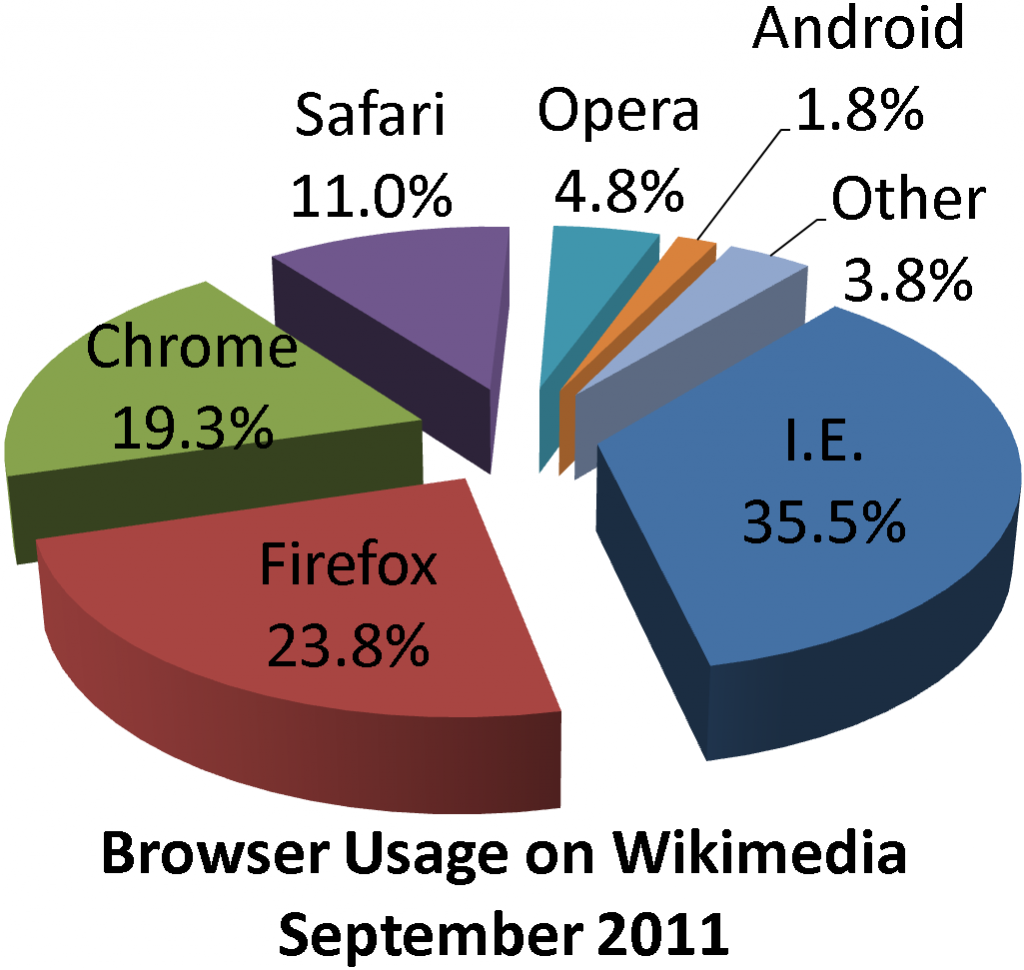 Judging by these numbers, Firefox is only 4,5 % ahead of Chrome, with Safari following at 11% and Opera with 4,8%. Internet Explorer’s share has dropped to 35.5%. How much time will it take Chrome to reach Firefox and then to take its place. Will the final battle be held between Chrome and Internet Explorer, Google and Microsoft?

We could continue the logic of the graphic brought to us by the well-known statistics company, Stat Counter. Here is how the browser market could look in the next 2 years. 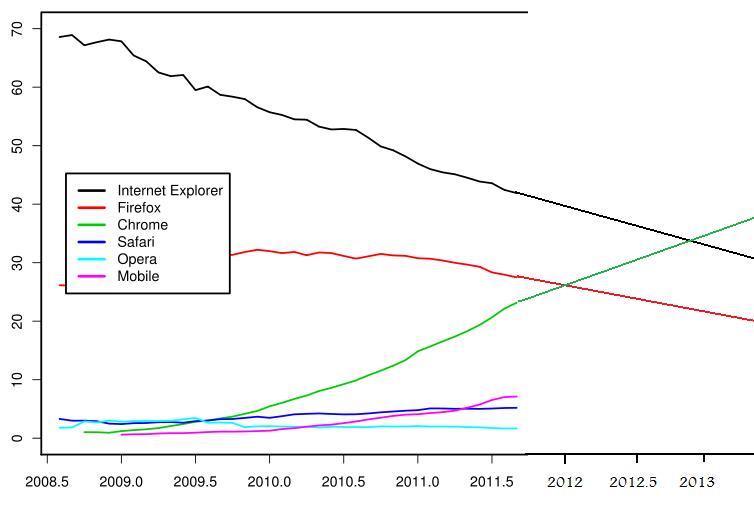 This is just a prediction and possibility of what things could look like. Of course, if Microsoft manages to cement Internet Explorer under security and they manage to profit from the mass adoption, they could stop the market share drop and maintain the first place. The same thing could happen to Firefox if the team at Mozilla manages to make it somehow more quicker and user friendly, just like Chrome seems to be. Otherwise, the market share of browsers could look something like this.

The Battle of Features

But wait a minute, why exactly is Google climbing so fast? What are the features that make it that powerful against Firefox, and what are Mozilla’s browsers minuses that Chrome is smart enough to crunch on? We will try and enlist them below for a more comprehensive exposure.

Chrome can lead the browser market, because it seems that Google leads the entire web, and, soon, it will enter also the smartphone market, after the Motorola deal. Will Google manage to become the leader in this market or Mozilla and Microsoft will know how to enhance their browsers and resist to the challenge? What’s your pick?

Other suggested articles on this subject:

Mozilla Firefox VPN Service Made Available for Android and…
Beyerdynamic Beat Byrd Earphones Review: Excellent Sound…
Mi Browser Pro, Xiaomi's Built-in Browser on MIUI Banned by…
How to Hide or Spoof Location in Google Chrome, Microsoft…
You Can Now Install Google Recorder with Live Transcribe on…
How to Install Firefox on Chromebook [Guide]