Sometimes all we want is to veg out and not think about anything at all. Whether you’re at the doctors office waiting to be called, or maybe commuting to and from work or simply at home and in need of “funny bone” therapy. The following iPhone apps should perk you right up and put a big fat smile across your face. 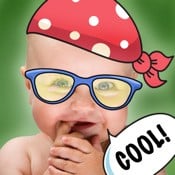 We scoured the web looking for the silly, the wacky and the wonderful apps whose only goal is to make you giggle or simply enjoy a moment of sheer time wasted.

This wacky app lets you make funny faces on your friends photos. Maybe that dreaded Uncle of yours is add it again, grab his picture and put a big silly mustache on him. From hats to different hair and alien antennas to speech bubbles, make a cartoon out of friends and family and get the last laugh.

This one is a total time waster and as such perfect for our list. If you know the classic game and song 99 bottles of beer on the wall, then this is very close to the real thing. You play by picking a random number and the song begins to play and you get to guess how long it will take for the wall to be filled with beer. Silly at its finest.

What is it about this seemingly simple contraption (and now game) that enthralls us and spellbinds us to play it? This is the classic game found on many office desks in US corporate buildings. How do you play? Grab a ball from either end, let it go and watch it go back and forth in a repetitive motion. The laws of energy (and wackiness) are at work here.

If you’re a kid from the 80’s this app will have a special nostalgic factor as well. It is a series of clips and quotes from “I Pity The Fool” Mr. T himself. You know the mohawk gold chain wearing big muscly bandit who starred in “The A Team” eighties action TV series. Press play and you’ll hear one of the many silly quotes he was known for. Want to hear more? Simply shake your phone.

Sometimes the best apps are the simplest. Take Paper Toss for instance, all you have to do is toss the wadded up piece of paper into the wastebasket. That’s it. But try and put it down and you won’t be able to. It’s addictive silly wacky fun. Oh! and it’s free.

There are so many iPhone apps out there, it’s almost impossible to filter them all out. Hope we gave you at least five choices for some good wacky fun next time you’re bored senseless and want something silly to play on your iPhone.

This was a guest article by Missy who is a writer and works for Gareth, a freelance link builder from the UK.

8 Best iPhone Ringtone Apps to Use in 2022
Read Next