It’s a well-known fact that printer technology has evolved a lot in the past years. From the first inkjet printers to laser printers and now, the stage belongs to the 3D printers. A new technology that is revolutionizing the way we look at printers, literally from a drawing on paper to a 3D object you can hold in your hand. A few years ago, 3D printers where just a concept, a thing we used to read in science fiction novels, but nowadays, they are getting more and more attention.

Related Read: How to Buy a Printer [Guide]

Because the prices for 3D printers have dropped, they can now be found even in some homes, not only in university science labs. They have bigger resolutions, so they can “print” more complicated designs with much more fidelity, putting them, for the first time in the shopping list of average consumers. Of course, they are still complicated pieces of equipment, and also bigger and slower than most inkjet printers, but on the other hand, they’re about the size of a big, laser printer. I’m sure that with time they will get smaller and smaller, and if the prices continue to drop, they will be a usual item on people’s desks.

But how do 3D printers actually work? It’s a question that I asked myself since the first time I’ve heard of such printers. 3D printers work by adding layer upon layer of material until they create a 3D object from a digital 3D file. There are other technologies, like DPL (digital light processing) that make 3D prints by shining laser lights in a plastic tub. When the light heats the molded material, it hardens. 3D printers are now getting smaller and smaller and soon we will be seeing them on everyone’s desk. But if you don’t want to wait until then, here are a few alternatives: 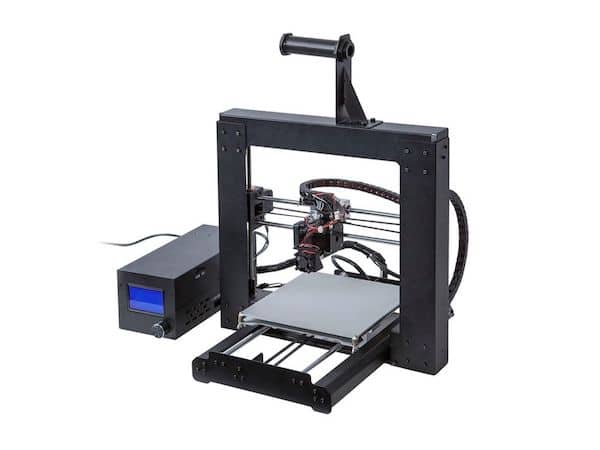 For just under $300 you might not expect to get anything more than a cheap 3D printer that you can mess around with.
However, Monoprice’s Maker Select V2 goes above and beyond for its price range.

For starters, it comes with an 8” x 8” x 7” build volume, which is pretty significant considering how much you pay for it. It also comes with a heated print bed, which means that it can print in ABS filament along with the standard PLA.

The Maker Select V2 can also hit print resolutions as high as 100 microns. And, while that isn’t great compared with some of the high-end machines out there, there are quite a few printers that come in over $1,000 that can’t do much better than 100 microns themselves.

Ultimately, if you’re looking to get into 3D printing and you don’t want to spend a ton of money to do so, Monoprice’s Maker Select V2 is an affordable option that is reliable enough and big enough to give you a worthwhile introduction to the technology. 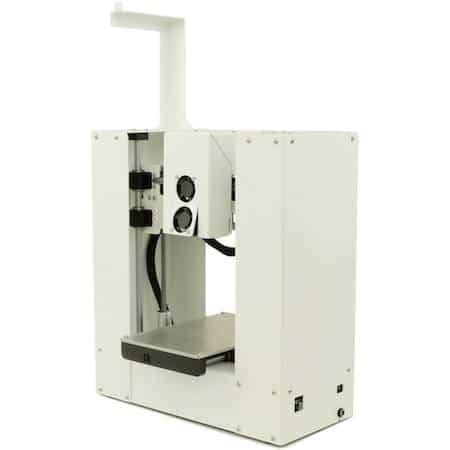 Another decent low cost 3D printer under $400 is the Printrbot Play 1505. It doesn’t have the build volume (~4” x 4” x 5”) or features (it doesn’t have a heated print bed and, therefore, can only print in PLA) of the Prusa i3 kits, but you won’t have to assemble it either.

Still, though, I highly recommend that you assemble your first 3D printer, just so you have a good idea of how they are put together. If you want to skip the assembly process, though, and you’re looking to spend under $400, the Printrbot Play 1505 is a decent option. 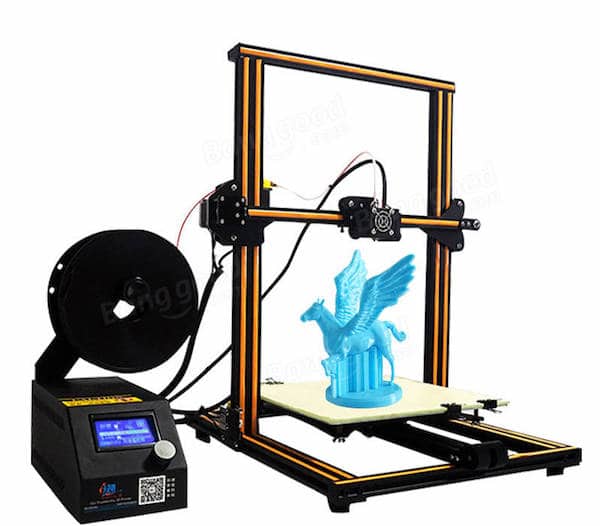 Another budget-friendly option that comes in at just under $600 is Creality 3D’s CR-10 kit. The most noticeable feature of the CR-10 is its massive build volume.

So, for a fraction of the cost, the CR-10 can deliver an incredible build volume. Of course, the CR-10 isn’t as polished of a machine as the Ultimaker 3 Extended. And, at its price range, you may get a better overall experience by paying a little more to get the dual extruding QIDI TECH I.

However, if you want the experience of putting together your own 3D printer (the CR-10 comes in a kit), and you like the idea of having an enormous build volume, the CR-10 is worth considering. Aside from its huge build volume, it can also hit resolutions as high as 100 microns. Unfortunately, though, it does not come with a heated print bed that can get hot enough for the printer to maintain prints with ABS filament. Although, many users have modded their CR-10 to accommodate printing with ABS. 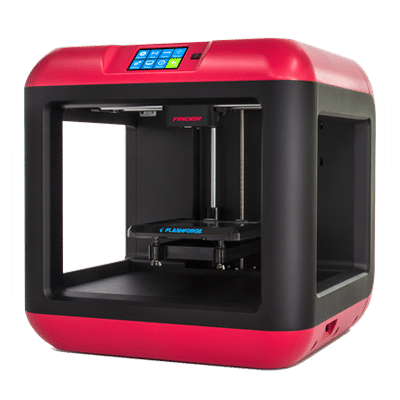 The FlashForge Finder originally released at a price of $699 but has since fallen to just below $500. At this price, it’s almost a steal…

No, there is no heated print bed, which means you can only print with PLA filament. However, if you’re looking for one of the easiest and most reliable 3D printers to use under $500, the FlashForge Finder is your best bet.

It has a build volume of ~6” x 6” x 6” and can hit resolutions as high as 100 microns. And, since FlashForge has been making 3D printers for awhile, it’s a safe bet that you can count on their support team in the event that something goes wrong with your printer. 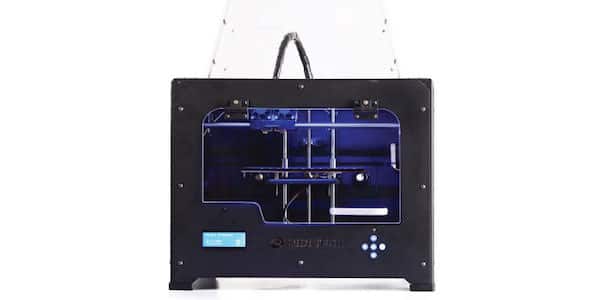 But, just because it’s a knock-off doesn’t mean it doesn’t work. In fact, since the original MakerBot Replicator 2 was an open-source design, you can expect similar quality.

The only difference? The TECH I costs a fraction of what both the Replicator 2 and Creator Pro cost.

As far as specs go, the TECH I has a decent build volume at roughly ~9” x 6” x 6”, a heated print bed, and it also sports dual extruders, which is virtually unheard of for a 3D printer that costs under $700.

And, perhaps the biggest draw of the TECH I (aside from its amazing price point) is the fact that there is already a large community that has built up behind the Replicator 2 and Creator Pro and so there are already a ton of available upgrades and mods that will work with this printer. 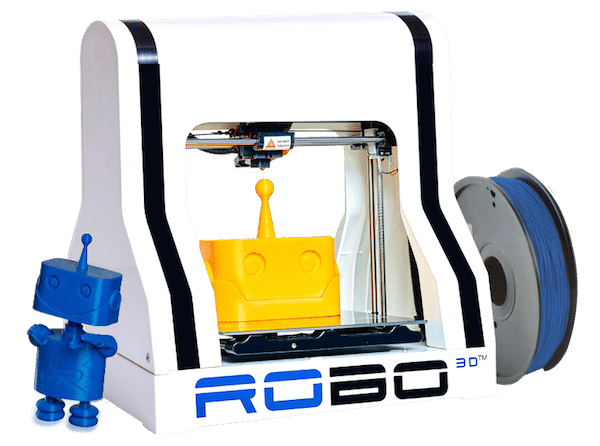 Another great alternative to the QIDI TECH I is the ROBO 3D R1 Plus. The newer version of the R1 Plus (the R2) should be coming out soon, but if you can’t wait this one is still a great option.

The R1 Plus comes with a pretty hefty build volume at ~8” x 9” x 10”, as well as it features a heated print bed (and, thus, the ability to print in ABS and other materials) and the ability to hit resolutions as high as 100 microns. While the TECH I offers more potential, if you’re looking for an affordable 3D printer from a company based in the USA for support-related reasons, then the R1 Plus may be the better option for you.

It’s true, the market for 3D printing is not that wide yet. But it’s a technology still in development and in few short years, you will be able to find them at your local computer dealership. And, to be honest, I sometimes doubt that 3D printing will reach to the wide audience because, if everybody will have to chance to make products at home, why bother and buy them. I am talking about small to medium objects that you could make using your printer buddy. And, why not, even make a business out of it? 3D printing and affordable 3D printers are the way to remodeling our society.

Update: This post was updated by Brent Hale, who runs TechGuided.com, where he reviews today’s top 3D printers, as well as offers 3D printing guides and covers the latest news from around the industry.

Was this article helpful?
YesNo
TechPP is supported by our audience. We may earn affiliate commissions from buying links on this site.
Read Next
Wear Graphene Gamma: One Jacket to Rule Them All
#3D Printing #Kickstarter