Everyone has imagined at least once in their life what the future will look like. I remember, when I was in the 5th grade, my art teacher gave us an assignment to draw how we imagined the future to be. My painting of the future was full of robots and control panels with lots of buttons and switches. In a curious way, I was right, but also wrong about this. Let me explain: the future will undoubtedly be full of automated devices, some with the possibility to think, with quantum computers as their brain, taking care of the high risk work that humans do now. This part I got right. The other part, the control panels and switches, not so much.

When I search on the web to see the latest developments in technology and the path that it takes, I see not buttons or switches, but clean, wireless panels, with touchscreens or holograms. It seems that glass is the material of the future and the keyword for the future is “smart”. We have started to hear these words already, and in the future, we will hear them more and more: smartphone is a very good example of a smart technology that has been implemented so far. Also, smart security, smart TV or smart materials are just emerging. All of these will ultimately come together to build the house of the future: the smart home.

This reminds of a TV series I watched, Eureka. And it’s about a normal guy (a FBI agent) that ends up in a town called Eureka, where all of the world’s leading scientist live. And his house is a smart house that talks to him and can do almost anything: cook, clean itself, give information about anything and much more. That is how I imagine the smart house to be like. What will this so called smart house will do that today’s house cannot? After all, it’s still just a roof supported by 4 walls. Or is it? If implemented, smart materials and smart appliances will revolutionize how we look at our house.

Some of these gadgets you will find in the smart home are already in development, and in few short years they will be something will see in most households or appliances stores. 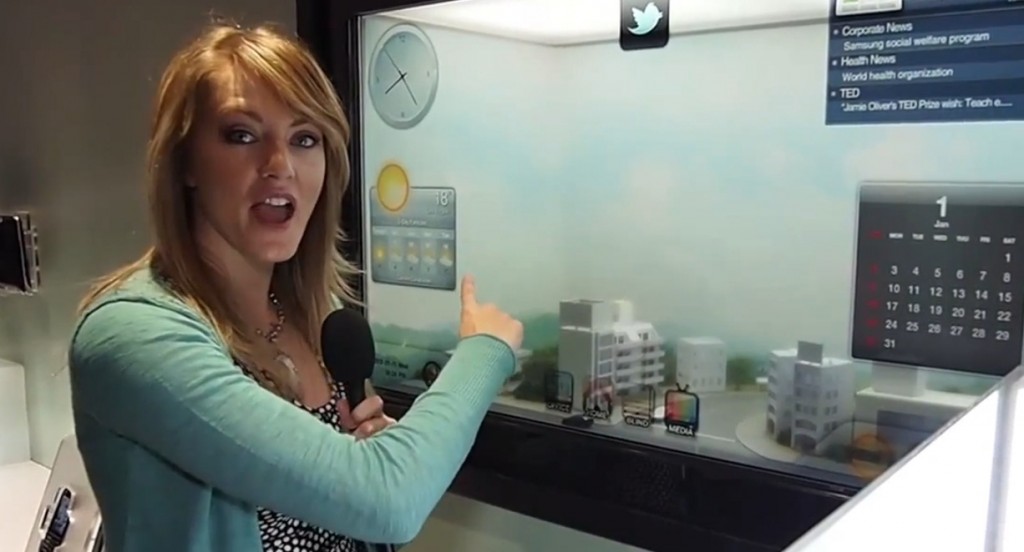 Last year, at CES, Samsung unveiled their new design for the smart window. You might say that it’s not a new technology, and you would be wrong! The smart window is not like the old smart glass, that could modify its opacity, but a completely new design that looks like the Minority Report glass. You can install apps on it, you can browse the web, basically, it’s a big touchscreen, like the one on your smartphone that can connect wireless to the web. It’s transparent, just like a normal window, but at the “touch” of a button, you can close the shutters. A great technology that will be released very soon, and it’s something I would very much like to use and must have in any smart home!

Of all things you would find in the smart house, the last thing you would expect to have a brain is the refrigerator. But, it seems that some people over at Samsung (I know, what’s up with these guys, making everything smart) and LG gave it a lot of thought and they’ve come up with smart refrigerators. These are not your average refrigerators, they have Wi-Fi connectivity, LCD displays, voice control and the possibility to view what groceries you have directly on your smartphone. The days when you pinned your notes on the fridge with magnets are gone, nowadays you write them on your smart fridge’s touchscreen. 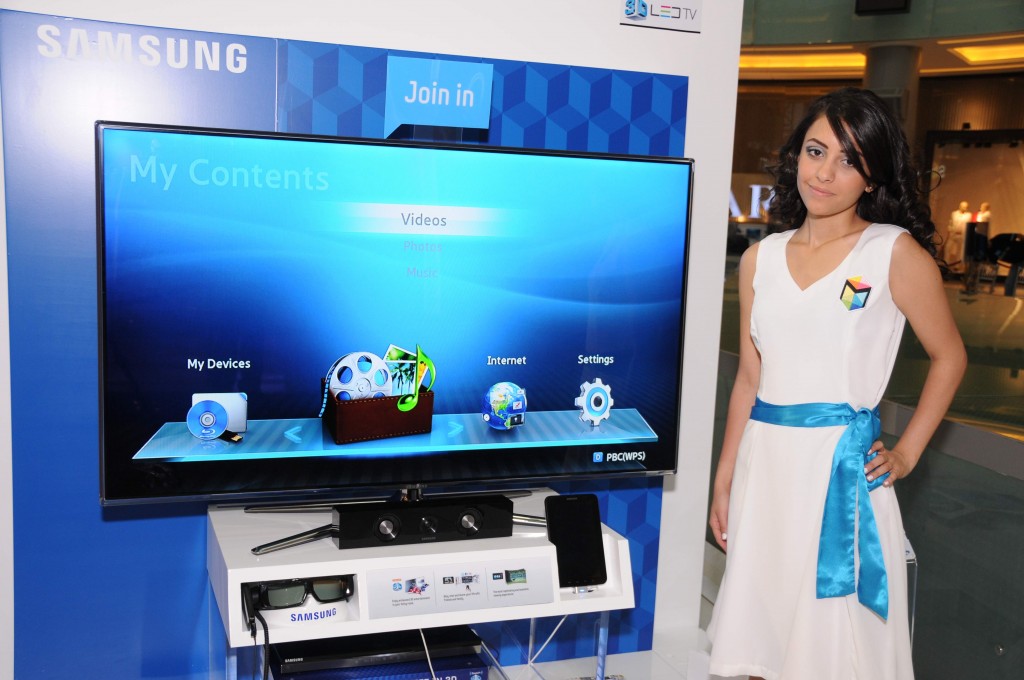 Smart TV’s have been around for a short while. We have seen what they are capable of doing, now having wireless internet support, 3D compatible, app market. They come with microprocessors, capable of thinking and giving you the best quality image possible. The cutting edge technology in TV development is now LED technology. They give manufacturers the possibility to produce incredibly thin screens (just a few millimeters) thick and also bigger screens than ever. Also mobile connectivity is now available, and the future series of smart TV’s will definitely be even more impressive. 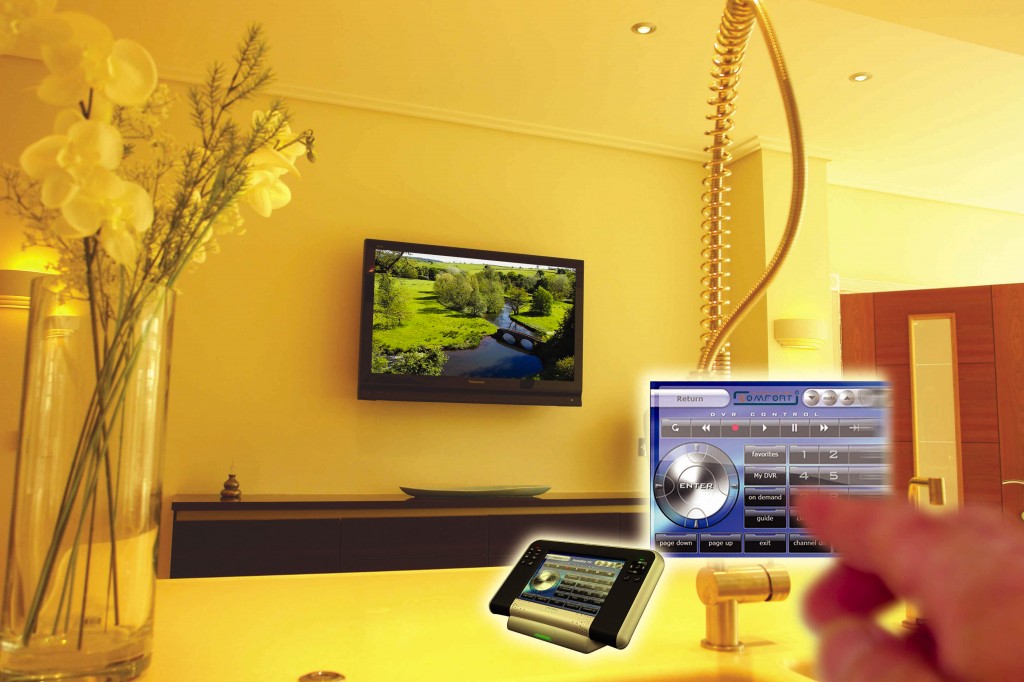 What is a smart home if it’s not secure? One of the basic functions of a home is to provide security for its residents. And the smart home security systems does exactly that: home automation technology notifies homeowners of any problems, and because it’s linked to the internet, it can even notify the authorities if someone tries to break in. In the smart home, there is however another type of security that has to be perfected. And that is self security. Because the house is linked to the internet and most of its appliances are also connected, the threat of hacking is greater. So the house has to have a few security features to protect itself and its occupants. Also, an artificial intelligence program would be a nice feature, one that can monitor homeowners health and who can learn their habits and attention them of any risks they might encounter.

All of these connected to your smart network, where you can access everything from the smart window to your heating or home entertainment. Everything will communicate with each other and make your house almost a living being.

These are just a few of the gadgets you will find in the smart home, and more are still in development. There are some who try to build in-home gardens, in witch you can grow your own vegetables, smart materials used to keep your more “green”, to consume less energy. If thing will go in the future at the speed they are advancing today, in 10 years we could live in our own Eureka house.

Was this article helpful?
YesNo
TechPP is supported by our audience. We may earn affiliate commissions from buying links on this site.
Read Next
8 Best Smart Scales to Buy in 2023: Weighing the Smart Way
#Smart Home #smart tv