The most popular social network just informed its 850+ million fans that a new feature is out of the testing stage. Facebook decided to take the “beta” warning sign off its Messenger desktop app for Windows after three months of testing. Users who are interested in installing the feature need to have devices running on Windows 7.

“If you use Windows XP, Windows Vista, Mac or another operating system, you won’t be able to install the app at this time,”

warns the official page. One of the advantages the Facebook Messenger brings to the fans is not only the option to keep in touch with friends and family who have Facebook accounts but also keeps users up to date with their news feeds, which could be replaced with Interest Lists soon. With this app, users will get notifications from their favorite Facebook pages as soon as they become available. 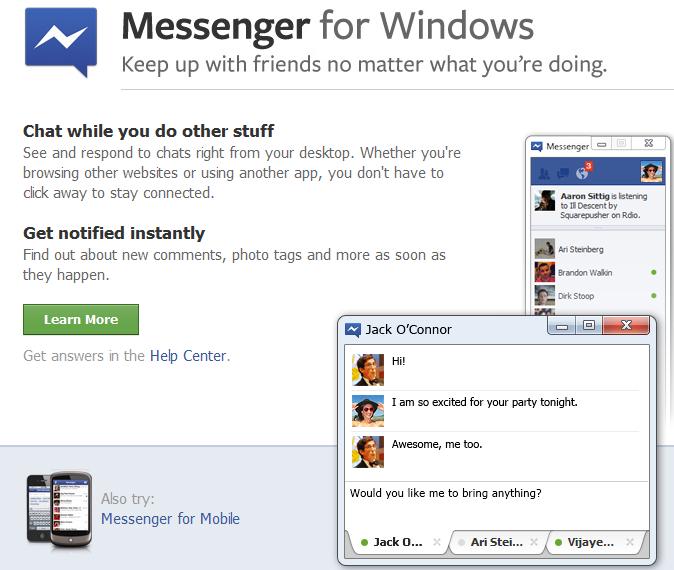 Practically, the new Messenger feature brings all the essential tools of the popular network even if the users are not on Facebook.

“Users also browse other websites and run computer programs, so it’s easy to miss important stuff. Maybe a cousin just posted about getting a new job, or a best friend wants to chat about dinner plans for tonight. You should be able to stay in touch anytime, no matter what you’re doing,”

According to the presentation page, the Messenger for Windows has a simple intuitive user interface, unlike some previous unfortunate design experiments that disappointed Facebook fans. Users have two separate windows to manage the information and the communication with Facebook Messenger. One of them is the familiar right column we see on Facebook, dedicated to contacts, but now this window also displays the news feeds.

The second window is reserved for chats and offers a tab browsing in order to give the users the possibility to keep their desktop clean. Facebook Messenger for Windows comes with support for 24 languages, the most important one are these

Since December 30, when the feature was released in Beta, over 5,500 users tried the new messenger. Obviously, the application will garner more and more users in the near future. For me, the Facebook Messenger feature should have been enabled from Day 1, but the mastermind behind Facebook had a different opinion. It reminds me of the good old days when Yahoo! Messenger was the only thing we knew…

Was this article helpful?
YesNo
TechPP is supported by our audience. We may earn affiliate commissions from buying links on this site.
Read Next
How to See Liked Posts On Facebook [2022]
#facebook