There is a new tool available for the Android smartphone owners who want to keep costs under control. Submitted by the developer Michael Ludwig, DroidStats is a free app from Android Market, – or, if you like it better, Google Play – which managed to get 4.5 rating from more than 8,200 content users. According to a little piece of information found on Michael Ludwig’s website, the app reached to the 50th version since the developer first drafted the project. This certainly deserves a thorough investigation.

Use DroidStats to Monitor Your Carrier Data and Postpaid Calls 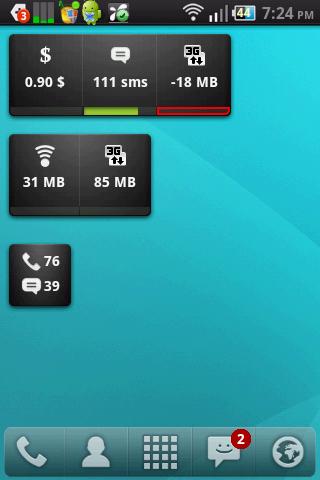 DroidStats aims to help phone users to keep an eye on their data usage, phone calls, and sent SMSs. The app lets the Android fans know how much of the available data plan they used and how much the carrier will bill them every month. For instance, if the carrier contract allows 100 minutes of calls every month, 150 SMSs and 200 MB of data over 3G networks, the app alerts the user when he approaches the limit and how much the extra costs are. The app works on devices running on Android 1.6 version and up.

In addition, DroidStats displays statistics about the calls and traffic. In order to get the best out of this feature, the users have a Premium version at their disposal, which, for $3.56, unlocks a set of other useful features. With the DroidStats Premium app, users can configure up to four widgets so they can see specific statistics. For instance, the app displays a chronological log of the SMSs and call events with supplementary information. In addition, the Premium version unlocks the Status bar Widget, which integrates the Notification Area.

The users are invited to test the free version first and then to make sure they are accustomed with all the features and when they are sure about the functionality of this app they can move to the next level. If you are looking for a step-by-step guide on how to use the app, check out this post on GuidingTech. There are however, a few caveats, as DroidStats might not work as expected on certain devices. Some problems might appear on Samsung smartphones. If you really want to save money and avoid carrier fees, why not try the magic power of VOIP?

Reliance Jio PostPaid Plus Plans: Everything you need to…
Corona Impact: Reliance Jio Updates 4G Data Vouchers with…
Recover Your Lost Data on Windows/Mac with iBeesoft Data…
EaseUS Data Recovery Wizard: a free data recovery software…
How to Use Krisp, the Noise Canceling App for Your Voice and…
How to Record Calls on Any Android Smartphone