After a long wait, the moment is finally here. Samsung unveiled their biggest (not largest) and baddest smartphone, more likely a “superphone”: the Samsung Galaxy S III. Packed full of features and with lots of horsepower under its hood, the Samsung Galaxy S3 is without a shadow of a doubt, the best smartphone in the world at this moment (in my humble opinion of course). Not even the mighty iPhone 4S is a match for this behemoth, offering top of the line performance, great features and a gorgeous design. 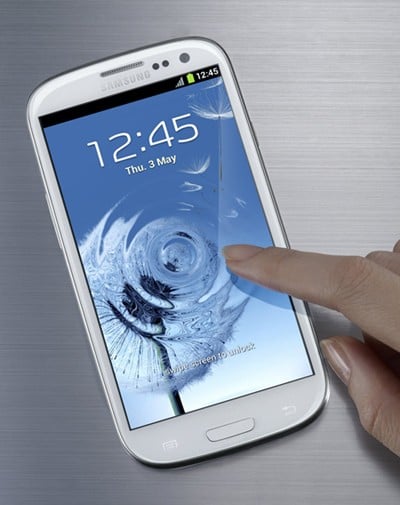 So, what are these features, and what powers this device you might ask? Well, let me take you on a tour of the Samsung Galaxy S III.

Samsung have once again outdone themselves and brought us a spectacular HD Super AMOLED PenTile display, measuring 4.8” with a resolution of 1280×720 and 306 PPI. These features make the screen look sharp and display excellent colors with great fidelity. Also, the screen is tightly bound with the front facing camera that detects what exactly you are doing, either reading an eBook, browsing the web or watching a movie and offers you the optimum brightness.

Also, the S GS 3 turns off the display when you are not looking at it, thanks to the front camera that can track your eyes. Although the screen is a PenTile, meaning that the blue and green pixels are longer and thinner than the red one, the effect isn’t that visible. If you look close enough, you might see it, but in regular use, it would be next to impossible to spot.

Have you ever heard the phrase “Picture Perfect”?  The SGS 3’s two cameras offer excellent quality and they can both shoot in HD. The rear camera has a resolution of 8 MPx, capable of shooting HD at 1080p at 30fps and pictures with stunning quality. Also, the camera has a Burst Mode that can shoot 20 pictures at 3.3 fps and automatically choose the best quality picture. Also, the shutter lag between pictures is now lower than 1 second, so it can take picture after picture with awesome quality.

A great feature of the camera is the facial recognition. When you take a picture of your friends, the Samsung Galaxy S III automatically recognizes their faces, allowing you to zoom with just a double tap. Also, after you take a picture, it recognizes who is in the picture and it can send a copy of the picture to them. A great feature, right? But check this out, the Samsung Galaxy S III can automatically correct pictures after you take them, leveling contrast, brightness and color levels.

The front facing camera is not to be forgotten. The SGS3 benefits from a 1.9 MPx camera in the front that can “see” when you are using your phone and turn off the display when you are not. Also, this little guy can shoot HD at 720p. 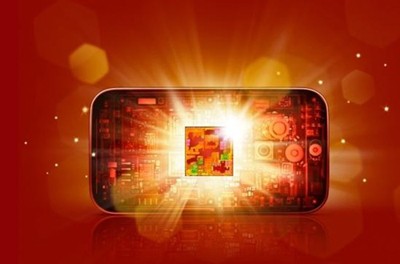 All these features and that massive screen need a great deal of horsepower to run smoothly, and so, Samsung have mounted a very powerful processor to keep things running great. And that power is provided by the mighty 1.4GHz  Exynos 4 Quad-core processor along with 1GB of RAM memory. Also, the graphics are provided by an quad core processor. So you can see, the Samsung Galaxy S3 has more power packed in it than any other smartphone out there. 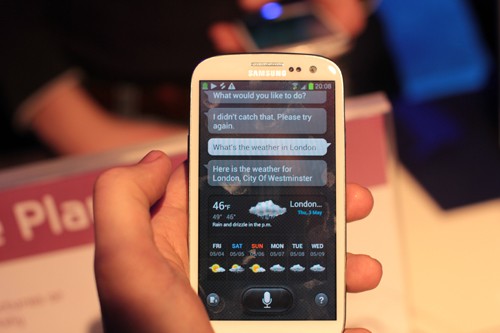 Samsung have put another brick towards making a real AI. The S Voice is Samsung Galaxy S3’s voice assistant that can help you with just about anything. Also, the voice assistant allows you to wake up your phone with just one word and take photos with no fiddling with buttons, just say “cheese” and your photo is taken.

Motion recognition might not seem a new thing in smartphone technology, but Samsung seems to have taken it to the next level. With a simple gesture you can now call anyone. For example, if you receive a text message from your friend “John”, and you want to call him back, all you have to do is put your phone to your ear and it will automatically search your contacts and call John. This feature is called Direct Call and it can save you lots of time searching through hundreds of contacts.

With all that power, there must be a compromise in battery power, right? Well, No! The Samsung Galaxy S III comes with a 2100 mAH battery, a spare battery (how cool is that!) and docking station. Also, the greatest accessory I have ever seen is the Wireless Charger Kit. I don’t know how it works, but all you have to do is place your smartphone on the charger and it miraculously charges your phone. 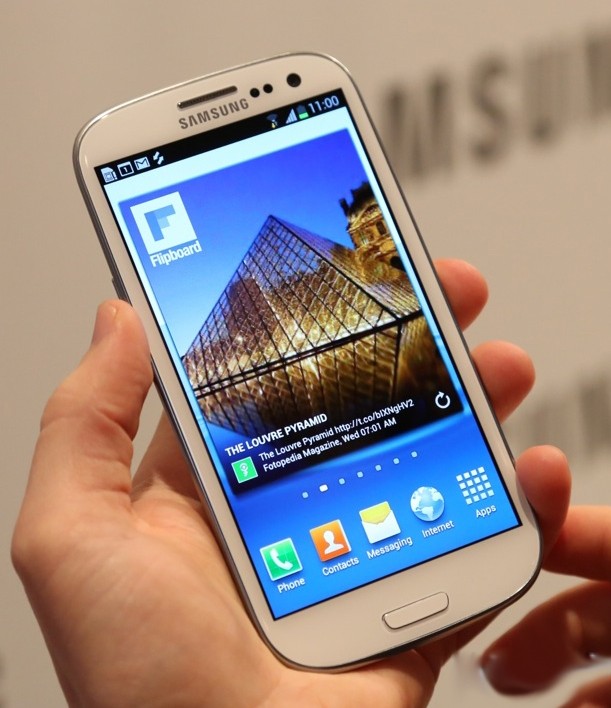 The wireless capability of the Samsung Galaxy S3 has gotten a makeover: the NFC enabled device is capable of speeds of up to 400 Mbps. Also, you can quickly upload pictures to Facebook, thanks to the facial recognition capability of the camera.

As for storage, the Samsung Galaxy S3 will come in 3 choices: 16GB, 32GB and later on, a 64GB version will hit the market. Also, the device’s storage can be increased via the SD card slot. Also, in the cloud storage department, the Samsung Galaxy S III comes with Dropbox Capability, offering users 50GB of space for two years. Also, you can enjoy Google Drive, but with only 5GB of free storage. 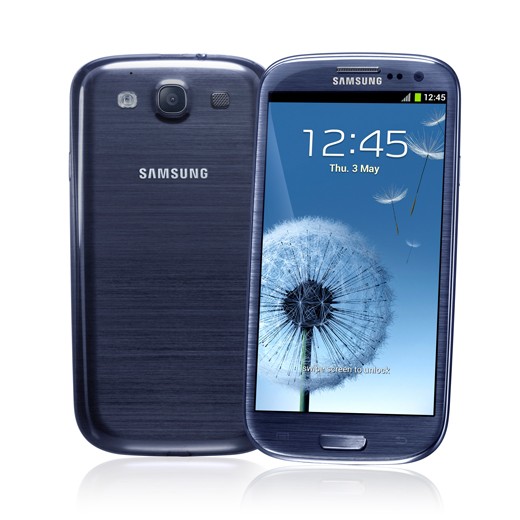 The Samsung Galaxy S III has a great design, more curvy and the nice Home button in the center give it a great look and smart finish. Also, it has Corning Gorilla Glass 2 display, so you won’t have to worry about scratches. The only down side of the phone is the slightly plastic feel it has, but that is nothing new in the Samsung Galaxy S III, all of the other Samsung smartphones had the same feel.

It would’ve been nice to see something along the lines of a metal back or something similar to liquidmetal. Maybe in the future we will see something like this, but until then, I’ll chose to think of it as a necessary compromise to make it a little less heavy.

As I mentioned from the start, the Samsung Galaxy S III is packed full of features. Apart from what we already talked about, there are a few more that are worth mentioning. Such as:

And that’s about it. The benchmarks put it on top, the specs put it on top and the features put it on top. So, the logical conclusion: Samsung’s flagship droid is the best smartphone out there. It should have its own league, where for now, it will be the only one there. Only time will tell if another droid will take its place, or if Apple will unleash a more lethal weapon.

Was this article helpful?
YesNo
TechPP is supported by our audience. We may earn affiliate commissions from buying links on this site.
Read Next
How to Use Android Phone as Webcam for PC
#android #samsung #Samsung Galaxy S3 #Samsung Galaxy SIII