For the past years, especially since smartphones and tablets have flooded the market, almost every week, I’ve been hearing new stories, rumors and court decisions about patent wars. I have always wondered who might be interested in this annoying brouhaha that didn’t seem to have a stop. The number of Android users has grown and so has the influence and financial power of the Cupertino company. That’s why, right now, the patent war between Apple and Samsung – the chief of the Android army – has reached its hottest point. 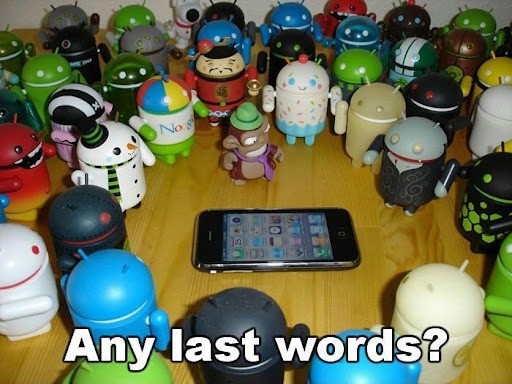 Steve Jobs himself used to say, quoting Pablo Picasso, that good artists copy, great artists steal. Looking at all this patent mess between Apple and Samsung, we realize that in some cases, good artists get banned, and great artists get patents approved, or, the other way around, if you like. From what I can tell, Apple has been one of the most aggressive companies in terms of suing others for alledged patent infringements. On the software side, it seems like an Apple-Android war; on the hardware side, it seems that Samsung has the “honor” of being charged attack after attack by Apple’s hoard of lawyers.

The patent war against Samsung is simply the latest and probably, the one that got the biggest promotion, mainly because there would be many consumers affected by a potential ban on Samsung’s devices. Apple won numerous legal battles, but this one seems different. Everything started when a California judge granted Apple a pre-trial injuction against Samsung’s Galaxy Nexus and Galaxy Tab 10.1.

Boycott Apple: we Want Innovation Back

Galaxy Nexus is a phone with Google’s direct involvement, so this makes it an even bigger patent war, with the chance of upsetting even more people at the Googleplex. Is Apple already acting too bossy, are they too greedy? These are questions that have almost created an online movement – Boycott Apple. You can see it trending on Twitter and Google Plus and if you think Apple has gone too far with their patent wars, join the cause. 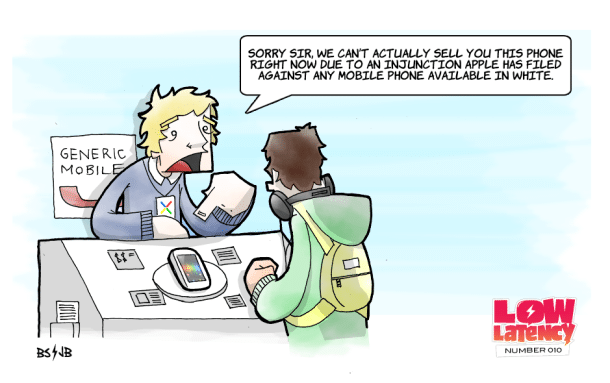 The same judge that granted Apple these crucial  preliminary injuctions stated that Apple must pay almost $100 million for a bond needed to secure this preliminary injunction. If I get it right, this amount represents the sum of money Samsung is losing while its products are being banned. For your information, Apple has lost a very important patent war recently, one that involved Motorola Mobility (now Google’s asset). Here’s what the judge had to say:

“Apple is complaining that Motorola’s phones as a whole ripped off the iPhone as a whole. But Motorola’s desire to sell products that compete with the iPhone is a separate harm, and a perfectly legal one, from any harm caused by patent infringement. To suggest that it has suffered loss of market share, brand recognition, or customer goodwill as a result of Motorola’s alleged infringement of the patent claims still in play in this case is wild conjecture.”

Therefore, it seems that Apple might be patent-hungry after this essential court loss. But banning Samsung’s products will make people turn their eyes towards such devices as the iPhone 4S, the new iPad or will simply make them angrier? I get it that for those that aren’t quite tech savvy, an iPhone might seem better than a Galaxy Nexus and an iPad better than the Galaxy Tab, but what about those that are on the Android side? Should we boycott Apple because they’re not allowing us to buy the products that we like?

What will happen if Microsoft’s Surface tablet becomes reality, will they sue them for the Smart Cover, as well? There are many reasons to boycott Apple, and one of the most recent seems to be one of political/social reasons. Recently, an Apple Store employee refused to sell an iPad to a customer that had Iranian origins. The employee said he can’t sell her the iPad because “USA and Iran have so bad relations”.

The employee was also claiming that Apple’s policy prohibits the exportation, sale or supply of any Apple goods, technologies to Iran, as well as North Korea, Cuba, Sudan and Syria without prior authorization from the US government. But how could he be sure that this person was going back to Iran? iRacism – reason enough to boycott Apple, at least from those that can empathize with the persons that have suffered.

Apple is the Master in Reality Distortion Field 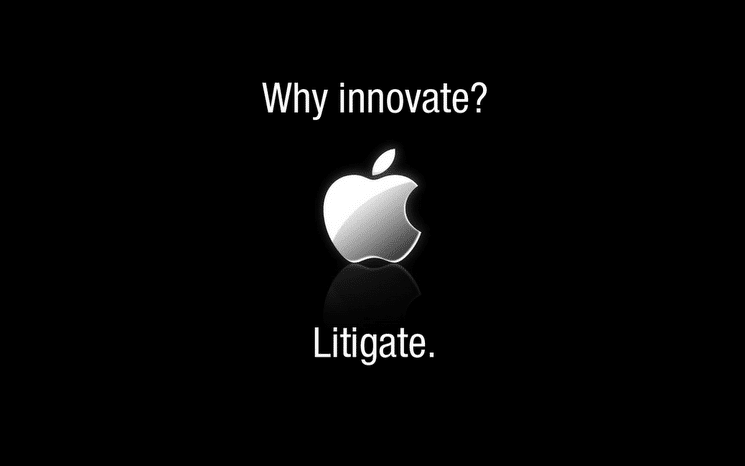 After all, just how much better are Apple’s products than everybody else’s? It’s not like they have a secret recipe and nobody else has it. Steve Jobs might have invented 300 different design patents, but I think his biggest achievement is the reality distortion field that he and his team have managed to create around Apple. Research in Motion has cemented this concept in a blog post 2 years ago. If you’ve been watching all their presentations, keynotes and so on, you should’ve noticed that there’s

a mix of charm, charisma, bravado, hyperbole, marketing, appeasement and persistence. RDF was said to distort an audience’s sense of proportion and scales of difficulties and made them believe that the task at hand was possible. While RDF has been criticized as anti-reality, those close to Jobs have also illustrated numerous instances in which creating the sense that the seemingly impossible was possible led to the impossible being accomplished (thereby proving that it had not been impossible after all.

Reality distortion field – I find this enough a reason to boycott Apple. I have always find it hard to understand why is Apple acting so agressive when it’s obvious that the innovation they’re doing is actually a well-crafted assembly imitation. They follow the paths of many predecessors, which have existing technologies and materials to generate new technologies by recombining them (extracted from the book Copycats: How Smart Companies Use Imitation to Gain a Strategic Edge). 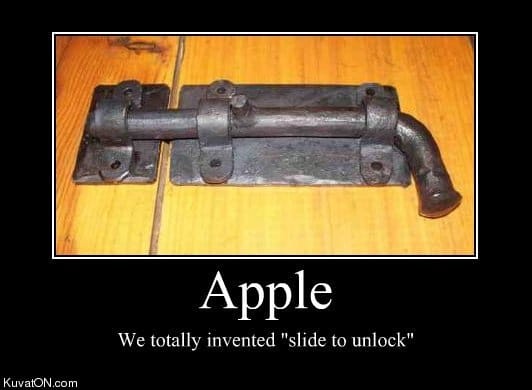 Therefore, Apple’s biggest merit is the one of properly assembling independent parts to create what we call an innovative product and then distort our perception about it and let thousands of blogs/websites to do the same. Going on the same logic, I remember what Isaac Newton said:

“What Descartes did was a good step. You have added much several ways, and especially in taking the colours of thin plates into philosophical consideration. If I have seen a little further it is by standing on the shoulders of Giants.”

Much of what Apple is today is owed to previous inventions, technological achievements done by other companies than Apple. And this is something perfectly normal, that’s how we’re evolving. Apple did not invent the MP3 player, the smartphone not even the App Store. We all know that Apple has been shameless about stealing great ideas. Have you ever wondered why patents are being made public? Isn’t that to further encourage innovation and restrict immitation?

But what Apple is doing is called – pattent trolling. Enough reason to boycott Apple – yes. They’re not protecting the innovation, but their own a$$ and money, frankly speaking. For them, this is good – protecting what they’ve crafted in their garage full of bright minds. But what does it mean for us? Why isn’t Apple becoming the superhero company that we all want it to be, why are they trying to kill competition? From what I can tell, true innovation can only come out of competition, but Apple doesn’t seem to love that. They want to maintain their position, they want people to blindly buy iPhones, iPads forever. But that’s impossible.

The reasons behind Apple’s legal battles are minor: they’re suing competitors for minor things that could be easily redressed. If you recall, Microsoft did the same thing, only that they allowed competition to change those parts that were similar. Apple wants far more drastic measures to be taken. That’s against innovation, that’s against competition and is actually supporting the monopolistic culture. Apple, just stop complaining and innovate even more!

Should You Boycott Apple Products?

Boycotting Apple, refusing to buy their products is what we can do as consumers to support innovation as it should be. Copyrights, trademarks are needed, but when it’s becoming a way to milk some cash, it’s aggressive. There’s clear proof that Apple stole from Google. There’s a real patent absurdity going on there, and everybody would benefit if Apple would cool off their dogs. If you still don’t believe Apple isn’t acting orthodox, here are some more reason from David Amerland:

1. Control-freakery – it all started with Steve Jobs and his internal culture of fear. It continues, to a lesser extent, today.
2. Dubious production methods – from virtual slave labor conditions to a totally unempathic approach to doing business abroad. Apple’s changing the world in terms of style but not substance.
3. Overpriced. – it is no accident that the company is so profitable. Their profit-margin is the sort which any business would die for.
4. Anti-competitive – they lock consumers into their ecosystem and developers out of it. They make it hard for you to port your data. Once the Apple shackles go on, boy they ain’t coming off.
5. Data hogs – they take your data, lock it into their verticals and never allow you to even see what they do with it.
6. Haters – their approach to banning products until patent issues have been resolved has never endeared them to me. Particularly since Steve Jobs himself said that Apple was one of the greatest thieves of ideas.
7. Anti-social – they truly fail to ‘get’ social both as an enterprise and as a community. They think generating a wave of bad will against them is OK as long as they still make money.
8. No conscience – at a time when most companies work hard to integrate themselves in their communities and develop a social conscience, Apple remains conscience-free.
9. Environmentally unfriendly – Apple has repeatedly come under fire for its environmentally unfriendly production methods. I admit that here I do not know how they stack up against the competition but Google at least has become a trailblazer in its Green Data Canters.

Apple is watching, don’t worry. They see our tweets, they see our posts. Apple is the master of crafting products and giving them an unbelievably simple, aesthetic aspect. We don’t want to view Apple as a megalomaniac company. We want you to further innovate, Apple. Focus on that and consumers will follow. Don’t kill competition.

[photo credits] – cnet.
Was this article helpful?
YesNo
TechPP is supported by our audience. We may earn affiliate commissions from buying links on this site.
Read Next
Best Places to Buy Refurbished MacBook or Mac [2023]
#android #apple #editorial