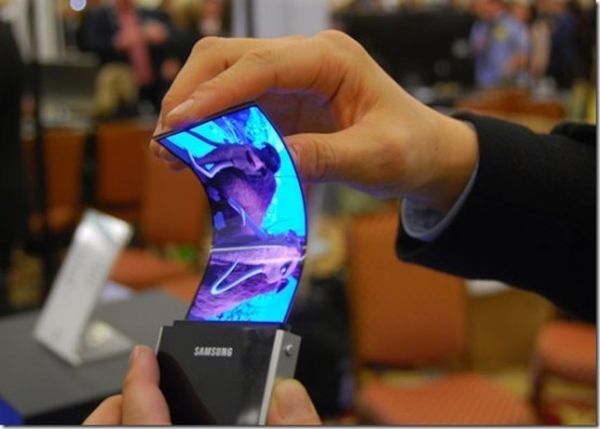 Samsung has set the pace when it comes to flexible displays, by creating the very first device with a flexible AMOLED panel which should arrive by the end of this year. As recent reports show, the Korean company has already begun research in the domain and if all goes well, we will be given the opportunity to own such a device before Christmas.

Moreover, Samsung is also looking to decrease the thinness of the display using this flexible technology, with the purpose of making phones much lighter or, leaving enough space for more advanced batteries, which should take the load of LTE-compatible terminals. Flexible displays have been the subject of discussion since last year, but never before we have encountered information that placed their release so… imminently.

According to the latest reports, Samsung has actually set the launch interval for the end of this quarter, in September. The display in case is called YOUM and as Samsung’s vice Chairman Kwon revealed in May, the units will be manufactured in several factories located in Tangjeong, the South Chungcheong Province, and we should expect around 960,000 OLED sheets by the end of this year.

Flexible AMOLED displays use a plastics substrate that allows them to be bended, foiled, curved and pretty much everything else. 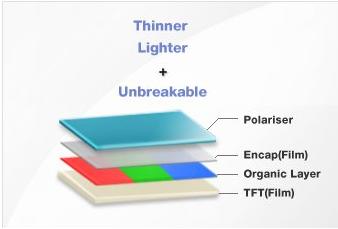 The technology used imbues the panel with powers that make it thinner, lighter and as researches brag, unbreakable. Although we can’t be convinced of the last property, the tempered glass used to manufacture the units will only be 0.6-millimeters thick, 1.2mm thinner than the current generation.

Smartphones packing displays three times thinner than anything on the market will have the possibility of integrating a larger battery or simply, be released way thinner.

Unfortunately, the whole story has a catch. Yes, Samsung will manage to introduce flexible AMOLED panels this year, but the glass foil shielding them from the environment will still be rigid. This means that although the smartphone will have a flexible display, the glass covering the panel will be unbendable and the phone will look and feel just a regular one.

Of course, Samsung officials have promised to resolve the problem as soon as possible, but it seems that actually, we are not going to enjoy flexible terminals this year, just rigid ones with a flexible display that cannot be bended. Perhaps, Samsung will take advantage of the new technology and shape them a bit different.

Update: Apparently, this wasn’t just a rumor or mere speculation. New information coming from Wall Street Journal lets us know that Samsung is quite serious about flexible displays. Samsung will replace glass with plastic, thus making the devices harder to break, easier to hold and bendable. Samsung Display Co, the subsidiary of the Korean behemoth, is reportedly nearing the final part of their flexible devices production.

However, this doesn’t mean that devices with this technology will appear on the market right away. We don’t know even how much Samsung is investing in this technology, but since this is something new, I’m sure it doesn’t come cheap for them. Here’s what  Lee Chang-hoon, the Vicepresident of the display unit said:

The key reason for Samsung to use plastic rather than conventional glass is to produce displays that aren’t breakable. The technology could also help lower manufacturing costs and help differentiate its products from other rivals

Was this article helpful?
YesNo
TechPP is supported by our audience. We may earn affiliate commissions from buying links on this site.
Read Next
Samsung Galaxy Unpacked 2023: Galaxy S23 Ultra with 200MP, Galaxy Book 3 with...
#display #samsung