The world’s leading developer of LCD screens, Samsung, has gone where none have ventured before: they released a clear window display that can render crystal clear images. At first glance, the display looks magical. The images floating in mid air give it an “out of this world” look as you can see from the video. At the presentation there were two models of this transparent display, one with a diagonal of 22” and another one with of 21.6” diagonal. The displays are inserted in a box-like computer that renders the images and with integrated audio for ambient sound.

When will it be available? 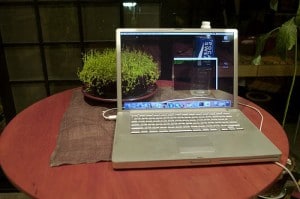 Samsung announced that the technology could be widely available as soon as September, although these displays were first unveiled back in June, but the media seemed to not give them too much credit. Just imagine what kind of cool gadgets could be developed using this technology.

As we saw with the flexible displays, the technology has a lot of potential, but there will be lots of development before it will be integrated in more devices. We saw this technology used at CES, where it was implemented in a laptop or, in the future such technology can be implemented in car windows, giving drivers the possibility to see real time information without ever looking away from the road.

According to Samsung, these displays are meant to create artistic video walls, something that would definitely give our cities a lot more style, almost making them a living organism. But they might also be used for commercial purposes, giving producers the means to advertise their merchandise like never before.

What potential does it have?

Although, smartphones might not benefit from this technology yet, due to the problems with the miniaturization of its other components. As with the flexible display, the battery or circuit board cannot yet be as flexible or tiny as it would need. But, nevertheless, this technology is awesome and I can’t wait to see a smart house full of such displays!

[via] SlashGear
Was this article helpful?
YesNo
TechPP is supported by our audience. We may earn affiliate commissions from buying links on this site.
Read Next
Samsung Galaxy Fold 4 Tips and Tricks: Get the Most Out of Your Phone
#display #samsung