For many folks, Jeff Bezos is the new Steve Jobs, he manages to make Amazon look like a one-man company, he’s got the same deep focus on their products just like the late Jobs had. What started as an online bookselling service has now reached unimaginable heights, as the leading cloud computing name in the industry. At a timely moment in company’s evolution, under Bezos’ lead, we saw the introduction of the Kindle e-reader, then the Kindle Fire followed. Thus, gradually, but with well thought-out steps, it has become a devices-and-services company.

Maybe that’s the reason why Amazon has managed to successfuly join the products race – they knew how to take care of the customers, since in their initial business, customers’ satisfaction was crucial to the success. Therefore, if you’ve established your company on customer fidelity, you already have an advantage and you’d better not ruin it. That’s why, when the Kindle Fire HD devices were launched, I was a bit cautious about their products and how will they perform on the market. Even if you are a loyal Amazon fan, you need to read this article to know what are the disadvantages of the Kindle Fire HD. 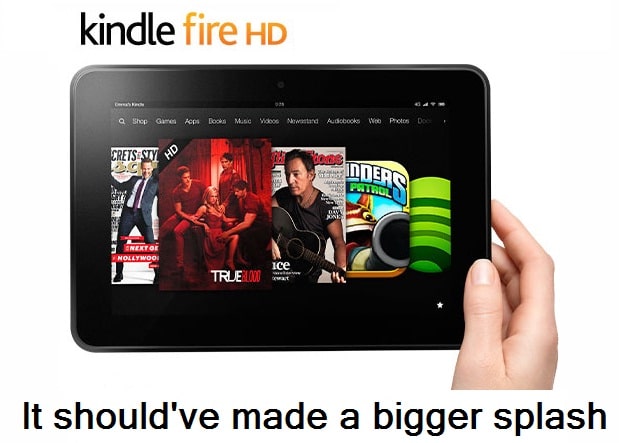 Kindle Fire HD seems pretty good, why not buy it?

You should read our article about the Kindle Fire HD line and you also should compare them with their direct competitors before we go on, so you could know what we’re talking about. If you want to be impressed and you are sure this is the product you want, then simply head over to Amazon’s website and I’m sure the information that’s present there will persuade you even more. And if you’ve been to the website, by now you already know what Amazon has to say about its own products:

And the list can go on and on, and it might be enough to convince you. With an incredible low price ($199 for the 16 GB, 7 inch model) the Kindle Fire HD seems to be a legit follow-up to the original Kindle Fire which has been bought by more than 5 million customers in the Q4 of 2011 alone. The launch time was good to, near the Christmas shopping period. But if we take out Christmas out of the image, if we take out the Amazon brand, would you bet your money on it?

Why Kindle Fire HD is a passable tablet 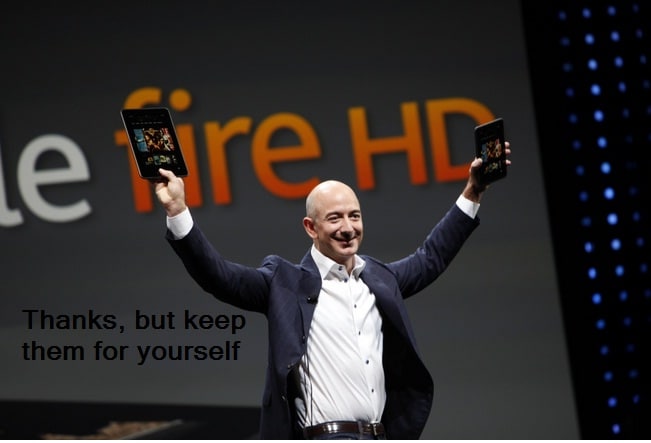 You should know the biggest disadavantage that a Kindle Fire HD has – without Amazon, you are dead and you have a brick in your hand that you can use to see movies in your bed or listen to music. Therefore, the Kindle Fire HDs are not global products, they will work at their fullest only there where Amazon digital services are present. Thus, even Amazon’s biggest bet – digital services, is flawed.

We will not go over again comparing it with Google’s Nexus 7, and despite of some issues recently reported by frustrated users, the Kindle Fire HD (the 7 inch version, that is) just can’t compare with Nexus 7’s specs. You just need to look at the pictures of these two to realize that the Kindle Fire HD is way more bulkier than the Nexus 7. You don’t even need to keep it in your hands to realize that it has a “boxier” look than even the original Kindle Fire.

And the weight doesn’t help either, having 13.9 ounces (394 grams) as opposed to Nexus 7’s 12 ounces (340 grams). We will continue to compare it with the Nexus 7, because frankly, currently it’s the best option available on the market at that size. An interesting review of the Kindle Fire HD on ArsTechnica highlights the fact that apps don’t open as fast as they do on other Android or iOS devices, and cause to that seems to be the “forked” version of Android, which currently is Ice Cream Sandwich only.

The silk browser isn’t as fast as you’d think

The same review on ArsTechnica refers to the Silk Browser as being one of the apps that takes the longest to open and once the browser has started, it delivers a satisfying, but not impresive speed. The application is also a little “jumpy” when trying to read some websites 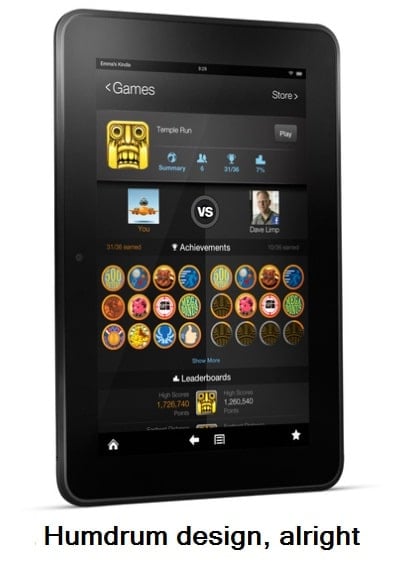 and page scrolling and zooming can be “choppy”. An user on TheVerge forums doesn’t have better words on the Silk browser, either:

As a purchaser of the original Kindle Fire, Amazon has a long way to go to earn my trust back. With all of their talk about how fast the ‘Silk’ browser was going to be, it never really delivered. The OS pales in comparison to the iPad. If Amazon wants to hang with the big dogs, they have to show they can deliver world-class software, not just cheaper hardware.

Another interesting article comes from somebody on SeekingAlpha who delivers some interesting graphs and also expresses its insatisfaction with the Silk browser, saying that “web-browsing was all but slow and laggy”. A more detailed piece on AnandTech shows that the improved browser consumess less bandwidth but actually delivers a slower performance. Here’s how Anand ends his analysis:

There’s also the possibility that Amazon is working towards enabling a 3G Kindle Fire with a more affordable/free dataplan. In doing so it would be motivated to reduce bandwidth consumption as much as possible. Until Amazon either gets more aggressive with Silk’s cloud-side caching or it releases a device that really requires the bandwidth savings, I am a bit puzzled by the focus on the feature at launch.

The same Casey Johnston from ArsTechnica informs that SoundCloud doesn’t work on the KindleFire HD and that actually, when you try to open a downloaded MP3 file, it seems that Kindle’s forked Android hasn’t “heard” of it. And back to the Nexus 7 for a bit. Nexus 7 loads uncached pages 2 or 3 times faster than the Kindle Fire HD. Bezos has praised the Kindle Fire HD’s browsing functions, especially thanks to the dual antennas and the Silk browser, but it seems all that can beat the plain simple browser in Nexus 7.

A big accent has been put on the X-ray function in the Kindle Fire HD, and here’s how Amazon describes it:

Amazon is extending X-Ray to books on Kindle Fire, making it easier than ever for customers to learn more about the content they love by exploring the ‘bones of the book.’ With a single tap, readers can see all the passages across a book that mention ideas, fictional characters, historical figures, places or topics that interest them, as well as more detailed descriptions from Wikipedia and Shelfari, Amazon’s community-powered encyclopedia for book lovers

A very, very impressive feature that would make many victims among the customers that are information-hungry and want to know everything. But, apparently, it won’t work for quite a lot of books and you’ll be left with the “X-Ray concepts are not yet available for this book” message. Let’s just say this feature is just like Siri for the iPhone – it’s awesome, it’s great but it’s just still in Beta. So don’t get easily fooled by this one, neither.

The hardware is just ok

A couple of insightful benchmarks prove further that the Kindle Fire HD is good, but it’s a passable tablet. The SunSpider proved what human touch has guessed before – the browser is slower than the one on Nexus 7. Inside we can find a 1GB of RAM and a dual-core 1.2GHz OMAP-4460 processor, not really mind-blowing specs. Bezos made a courageous statement saying that the device will last up to 11 hours, no matter what you do, but you won’t find too many reviews confirming that. Here’s what Casey’s conclusion about the Kindle Fire HD is:

Unfortunately, good isn’t good enough when the Nexus 7 is out there winning hearts and minds without unusual design elements like the carousel or an ever-present row of Things To Buy on the home screen. The Nexus 7 is also faster, has better battery life and a more robust app store, and has access to most of the same content—save the free streamable videos that come with an Amazon Prime account on the Kindle Fire HD. We were excited to see a worthy 7-inch tablet with the launch of the Nexus 7, and hoped to see some lively competition in the segment. With its vault of services underpinning the financial viability of a cheap tablet, Amazon is perfectly positioned to present such a competitor. Unfortunately, the 7-inch Kindle Fire HD isn’t it.

It comes with poor data plans

Another important selling point for customers that didn’t make enough research could be the data plans. Without a reasonable, affordable data plan, your tablet will become worthless, or, just like I said, you’ll use it just for seeing movies and listening to movies, because browsing would be too expensive. And Amazon seemed to have taken care of that with an impressive offer, which seemed to be 80% lower than any comparable offering in the market at that moment.

For $49.99 per year, you’d be getting 250 MB per month and 20 GB of cloud storage. While that sounds good, it clearly overlooks some important points, highlighted by Bill Snyder and other folks. Here’s what The Street has on this:

There was confusion during the event over whether the cost of the data was being subsidized by Amazon and would revert to original prices. An Amazon spokeswoman confirmed that the $50 cost is only for the first year, and “after that customers can choose from one of AT&T’s other standard plans.

For the first year, Fire HD 8.9: owners can pay $50 once for 250MB/month. After that year ends they go to a traditional data plan by AT&T. Monthly plans normally cost $15/month

And that’s for the first year. But what happens after you’ll run out of those (lousy, in my opinion) 250 MB? Well, you’ll just have to pay $30 to AT&T for the next 3GB of data or you could buy 5GB for $50. Suddenly, that doesn’t sound that cheap anymore. Amazon claimed the Kindle Fire HD will have “revolutionary” yearly plans; instead, what customers will get will be just the same package the carriers offer, no special treat at all. And you’d be amazed to know just how fast 250 MB can be burned out.

Don’t be deceived by the low price

And please, don’t forget that you have to pay to have those ads removed. While it might not be a huge amount, it’s still an error in my opinion. At the official launch, Bezos announced the slates will be advertising-supported but then, after seeing how frustrated customers became, they quickly changed the plan, saying they will disable ads for $15. It’s not much, but still, it bothers you to pay for something that you naturally feel you should have right from the start.

While the “lags” found in the short video below won’t bother a lot of folks, you should know that this is a symptom for the “medieval age” tablets. “Modern” tablets are way, way faster than that. In the end, in the case of Kindle Fire HD, you get what you pay for – a compromise between hardware and software by a company that tries not to deceive its hard-earned customers. But Kindle Fire HD is just an ordinary tablet and it’s not the kind of product that would make Bezos proud of its company. Its low price could make you buy, but later on you’ll just have to pay more and more, as it basically serves Amazon as a way to make you more and more digital content.

Was this article helpful?
YesNo
TechPP is supported by our audience. We may earn affiliate commissions from buying links on this site.
Read Next
12 Best Audible Alternatives: Top Free or Cheap Audiobook Apps [2022]
#Amazon #editorial #Kindle Fire #tablets