If you’re thinking about getting a new laptop in the near future, you might want to think again. This year many manufacturers have released their latest laptop lines, known as Ultrabooks. These super-thin devices are the logical end of the laptop platform. Manufacturers have stripped out all unnecessary components and have provide a thin, light, and sleek portable computer. And yet, in a few years we might not see many computers like these. There is another replacement, and it’s already on the market. 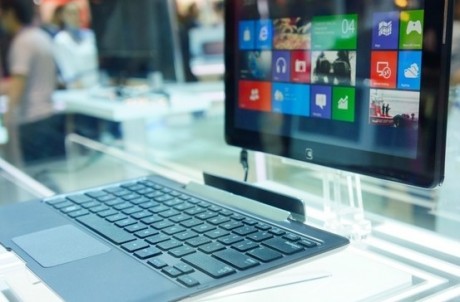 There is a recent trend in tablet computers, and it’s bound to catch on soon. Instead of releasing a standalone tablet, a few manufacturers have sold tablets along with keyboard docks. The result is a thin, lightweight, and ultra portable laptop computer.

Manufacturers such as Asus, with the Transformer Prime, have led the charge here. Third party accessory manufacturers have gotten in, too, creating keyboard docks for many popular tablet lines, including the iPad. Microsoft is getting in on it, too, releasing the Surface tablet with an ultra-thin keyboard attachment.

Almost any tablet you buy today can hook up to some sort of keyboard dock. And if you look around you, you might notice that more than a few people are taking advantage. The next time you’re in a coffee shop or library or other place where people use computers in public, check out their equipment. A good number are bound to be using tablets as laptops.

Why hybrid tablets will replace laptops

The first question that might come to mind is, why would people choose tablets over laptops? After all, laptops are more powerful devices. They run full-powered desktop operating systems, they’re ultra fast, and they can store reams and reams of data. But these are the exact reasons why tablets work better for many consumers.

Few people need a full-powered operating system. Think about how you use your own laptop. Do you take advantage of all that software your laptop can run? Do you absolutely need all that processing power? Chances are you don’t. Most people use their laptops for very basic tasks: email, word processing, spreadsheet creation, web browsing, music playing, video streaming, etc. A tablet can take care of all these tasks and more. Without the need for serious computing tasks, a tablet is more than sufficient.

Tablets run as fast as most laptops. Modern laptops might have processors in excess of 2GHz and RAM in excess of 4GB, but that doesn’t mean they run faster than tablets. A laptop needs that power to run Windows or OS X, which uses much more processor power and memory. A tablet runs a much simpler mobile operating system (even Windows 8 RT is optimized for tablets), which requires lesser power and lesser memory. The result is a device that runs just as fast as a laptop, despite its inferior processor and RAM.

On-device storage isn’t as big a deal these days. With cloud storage lockers such as Google Drive, we don’t need as much on-device storage as we once did. While on-device memory might be more convenient in some ways, it’s simply not a necessity any more. This allows tablets with 32GB or 64GB to be as viable as laptops with 250GB.

This isn’t to say that tablets will kill laptops. While the general public can get as much out of a tablet as a laptop, there are many specialty tasks that only full-powered PCs can perform. Manufacturers will continue to create and market laptops for these market segments.

Media creators will continue to need high-powered laptops to ply their crafts. While many need the power of a desktop — a film producer friend of mine has a 12-core Mac Pro — others can get by with laptops such as the MacBook Pro. Manufacturers will still create high-powered laptops for this crowd.

Gamers, too, need higher powered computers. While there is an increasing library of high-quality games for tablets, they simply do not match the games created for full-powered PCs. Lenovo prides itself on creating the best gaming laptop with the IdeaPad, so it won’t likely stop serving that market segment. Gamers who travel will need something that powerful, so manufacturers will oblige.

Yet most laptop users will not need advanced media creation functions, and they won’t need the graphics cards and processors necessary for serious gaming. They can get by with a more basic operating system, which is what they get with Android and iOS.

Why haven’t consumers started buying tablets to replace their laptops? Because there are still a few obstacles in the way of widespread adoption. For instance:

Yet these aren’t difficult obstacles to hurdle. In the near future we will see more and more consumers adopt tablets as their laptops. They’re more versatile than laptops, and they can provide many of the same functions. Surely they can provide the basic functions that the average consumer needs.

This was a guest post by Joe Pawlikowski, who writes and edits several technology blogs across the web. His BlackBerry site, BBGeeks, is set to transition into a site that covers iPhone, Android, BlackBerry, and the entire smartphone world.

Was this article helpful?
YesNo
TechPP is supported by our audience. We may earn affiliate commissions from buying links on this site.
Read Next
Asus ROG Strix Scar 15 (2022) Review: Power-Packed Performance
#guest-post #laptop #tablets