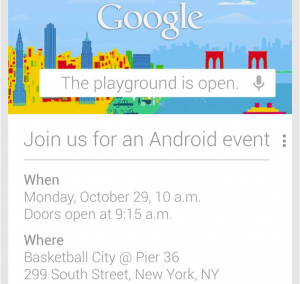 Google has done it again! They will be hosting a mega Android event in New York on Monday, 29th October, which is basically the same day as the pre-announced Windows Phone 8 Launch by Microsoft, which will take place in San Fransisco. Ouch!

This isn’t the first time Google has done something like this. A couple of months back, Google held an event to announce a couple of Motorola Droid smartphones exactly on the day Microsoft & Nokia had scheduled a WP8 introduction event. Microsoft’s corporate communications lead, Frank Shaw, was quick to point this out on Twitter.

Second time they’ve scheduled an event same day as ours. Imitation=flattery I hear. :)

We have seen quite a lot of leaks and rumors surrounding LG Nexus 4 with Android 4.2 (codenamed Key Lime Pie?). It’s been a while since we heard about the possibility of Google launching multiple Nexus devices by multiple OEMs. The invite “The playground is open” could possibly be hinting at that.

The other possibility is that “Playground” might actually be referring to Google Play, the Android apps and multimedia marketplace, so we might as well see updates or new content deals announced. There are talks about a 32GB variant of Nexus 7 being announced as well during the event.

As always, Google will be live streaming their Android event on YouTube. The event will begin at 10am EST and can be watched live on Youtube.com/Android.

In case you are looking for the live stream of Microsoft’s Windows Phone 8 event, you can bookmark this link and check back on 29th Oct for the webcast link.

We have an exciting fortnight ahead, starting with Apple’s iPad mini event on Oct 23rd, followed by Microsoft Windows 8 launch on Oct 26th and finally the twin events on Oct 29th! Can’t wait!

Was this article helpful?
YesNo
TechPP is supported by our audience. We may earn affiliate commissions from buying links on this site.
Read Next
10 Ways to Fix Photos App Not Working in Windows 11 [2022]
#android event #google nexus #microsoft #WP8