Apple has launched its new iPad recently, and it would seem befitting Google to unveil their new device, one that could take on the 4th Generation iPad. The device has just saw the light of day and it has already made a lot of fans. All the new improvements and power inside this Nexus 10 inch tablet is amazing. Many would argue that it is already too late for Google to jump into the large screen tablet market, where Apple has already made a huge impact with its fleet of iPads.

Although Google has much ground to cover, the Nexus 10 tablet is pretty powerful and with its horsepower, it can definitely propel the Google Nexus series right at the top of the pack. The device was produced in partnership with Samsung, a well known smartphone and tablet manufacturer and an old friend of Google’s. Together they have made quite a lot of very well crafted Nexus devices, and it would seem, they thought to add another on the list. 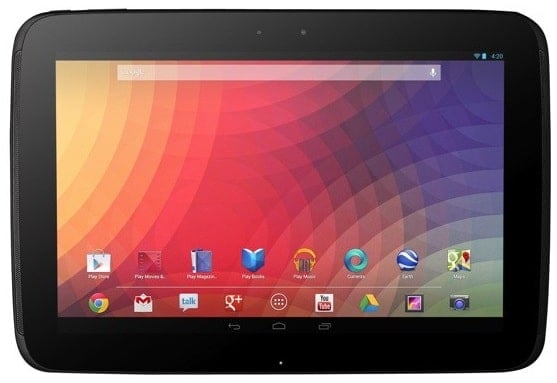 The Google and Samsung development team has put a lot of work into the Nexus 10’s design and features, and they have come up with an awesome tablet that gives users a perfect balance between style and power. With these new upgrades, the new Nexus tablet definitely has what it takes to take on the Apple Generation 4 iPad, and might I say, even surpass it (Android user here).

Only time with tell which of the two will end up on the first place.  Here is a quick list of what Nexus 10 brings to the table, you decide if it can be a worthy competitor for the iPad and other top of the line tablets out there. 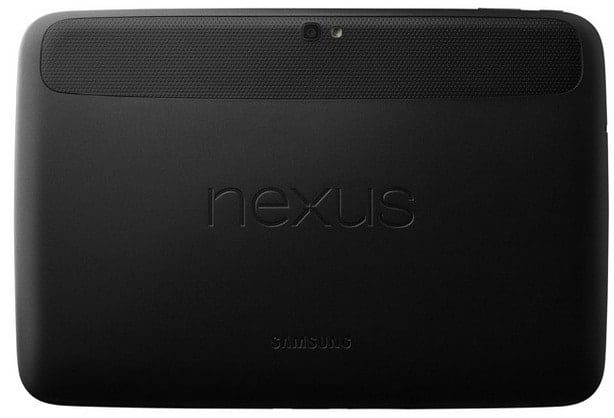 Join us as we take a look at some of the new features that Nexus 10 has under its hood. As you will see, this tablet has been designed to provide its users with the ultimate multimedia experience, but it also has the power to do more demanding tasks. The design of the tablet is also a bit changed, but it still retains the Nexus look and feel.

A feature that we really wanted to see in the Nexus tablet series was a bigger display. And this is exactly what Google brought us. The Nexus 10 (as you might have guessed by now) features a 10.55 inch display that has a resolution of 2560 x 1600. This means that it packs a pixel density of 300 ppi, bigger than any other tablet on the market (take that, Retina Display!). Movie lovers from around the world will find this feature to their liking, because, thanks to the higher pixel density, they will see a change in the quality of the image.

Something that the Nexus 7 should have definitely had was a rear facing camera. Well, the Nexus 10 makes up for that drawback and packs a 5MP back camera as well as a 1.9 MP front facing camera. Here is where the Nexus 10 presses its advantage over the competitors, packing a bigger front camera that will be very useful for video calls and web conferences.

Google designed this tablet so that users can have a much better multimedia experience when using it. And in order to do so, they made some modifications to the sound system. The Nexus 10 has two front facing speakers that will give users a much better sound experience. This feature proves again that the design team had a multimedia tablet in mind, capable or showing high quality images and sound.

The horsepower needed by the Nexus 10 tablet comes form a Samsung Exynos dual core 1.7 GHz processor (based on the Cortex A15 processor), a Mali T604 quad core GPU and 2GB of RAM memory. These make the Nexus 10 a very powerful tablet, able to accomplish just about any task you can throw at it. Also, because Samsung has gone with the dual core CPU, this would mean less strain on the battery, making it much more efficient than older models. The tablet has a 9 hour battery life for video viewing, which falls just shy of the 10 hours that the new iPad has.

As with all Nexus devices, the Nexus 10 tablet benefits from all the modern day connectivity options. The tablet has NFC support, 802.11 b/g/n (MIMO + HT40) WiFi, Bluetooth 4.0 and 3G. Also, the tablet has a micro-USB port and a micro HDMI port. All of these goodies come in a 603 grams tablet that is only 8.9 mm thick.

Starting with November 13th, the tablet will be available on the Play Store in US, UK, Australia, France, Germany, Spain, Canada and Japan, and for those willing to buy it, they will have to put down $399 for the 16GB version or $499 for the 32GB version. If we do a quick review of the latest updates we found in the Nexus 10 tablet, we see that the Nexus series has really gotten a long way:

Just like with the LG Nexus 4, the 10 incher from Google has no microSD slot, which will prove to be quite an issue for those that have lots of things on their tablet. Also, when the latest novelty seems to be 4G LTE in terms of data speed, Google has decided not to include that. Quite a drawback for those that want blazing web experience.

These are all great specs, and with the Android 4.2 (which has some awesome new features) that will come with the Nexus 10, I am extremely confident that a large number of people will be buying it, despite of some real competition from Kindle Fire HD and Windows 8 tablets.

Was this article helpful?
YesNo
TechPP is supported by our audience. We may earn affiliate commissions from buying links on this site.
Read Next
How to Fix Google Chrome Translate Not Working
#android #google #nexus