When you think of tablets, you usually end up with a picture of an iPad in your mind. It is, without a doubt, the most iconic tablet out there, and as most say, the best. This matter is yet to be settled, mostly because the market is on a continuous move and so, newer devices appear all the time. One such device is the new Nexus 10 tablet, the device that could be considered the main competitor for the new 4th Generation iPad.

They both have very cool features and lots of power, but which one is better? In a head to head race between the Nexus 10 and the iPad 4, which one has what it takes to take the number one spot for the best tablet on the market. We will put them head to head and explore their strengths and weaknesses to see which is better. 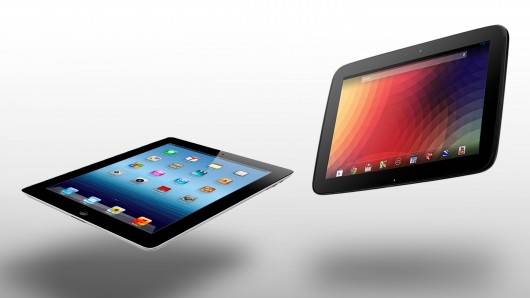 These products were both recently launched and, as you will see, they are pretty evenly matched. Both Apple and Google with Samsung have put a lot of work and effort in designing and building these devices, but they have gone on different paths. Where Apple chose to keep to tradition (but still adding much more power to the device) and create a device that closely resembles its predecessors, Google has given the Nexus 10 a fresh new look. The power inside these devices is outstanding, each surpassing the expectations of the users, but which one is the best? Stick around and find out as we put them head to head.

The design of the tablet is something that we take very serious into consideration. It has to have the right dimensions, the right weight and it must feel natural when we use it. Although the Nexus 10 has gotten an overhaul of its looks, at least in my opinion, it falls short when compared with the iPad 4. Apple have found a great design and they have stuck with it and it seems to be very successful but this aspect is based more on personal preferences.

Winner: Nexus 10 in dimensions, but iPad still has a much better design.

Performance is one of the most important aspects (if not the most important) of a tablet, so choosing the one that performs the best is crucial. Although higher specs do not necessarily mean quicker response and overall performance (I am referring, of course, to devices that have similar specifications).

If we were to look at what these two tablets have under their hoods, then the Nexus 10 would take the prize. It packs a Samsung Exynos dual core 1.7 GHz processor, Mali T604 quad core GPU and 2GB of RAM, compared to the Dual core A6X 1.3 GHz processor and 1GB of RAM that the iPad 4 has, but where the iPad is superior is at storage space. The Nexus 10 comes only in 16GB and 32GB versions, while the iPad has the 64GB version as well. A major disadvantage of both these devices is that neither of them have SD card support.

Winner: it would seem that Nexus 10 is for now, but we’ll wait for some benchmark tests, as well. 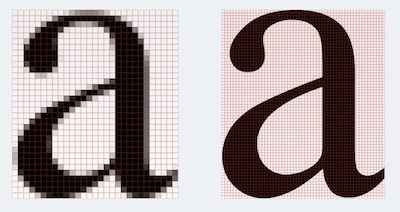 The main feature that makes tablets so successful is their bigger displays, which give users more multimedia capabilities. When compared to smartphones, they much better at reading or watching videos, so the display is what makes or breaks a tablet. As we have recently discussed, tablets have a much better resolution than laptops.

Until recently, Apple had the most crisp and colourful displays thanks to their Retina Display technology. However, the manufacturers of the Nexus 10 have managed to give it a bigger and better display. Compared to the 9.7 inch, 4:3 ratio display from the iPad, the Nexus 10 takes the lead with its 10 inch display, capable of showing 16:9 aspect ratio. Also, the resolution is better on the Nexus 10: 2560 x 1600 and a 300 ppi pixel density, while the iPad 4 has only 2048 x 1536 and 264 ppi. 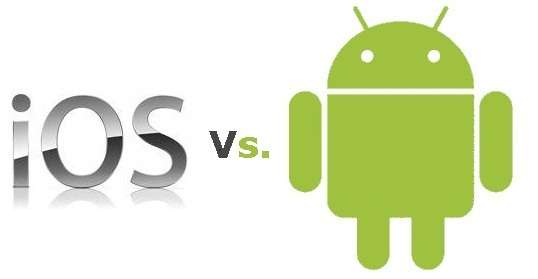 As far as the operating systems is concerned, both Android 4.2 and iOS 6 offer great performance and features. What interesting features to point out in the OS section are the multiple user accounts that was implemented in the new Android 4.2 Jelly Bean or the updated Siri that comes with iOS 6. The choice here lies with the users and what they find more familiar and it would be pointless to choose one over the other without going into the now classic Android vs. iOS battle.

When looking at other features of the two, we can see that the 1.9 MP front facing camera of the Nexus 10 surpasses the 1.2 MP camera installed on the iPad, but regarding the back camera, they end up in a tie, both having installed a resolution of 5MP. Regarding the sound system, the developers of the Nexus 10 have installed front facing stereo speakers which offer superior sound quality, but this aspect is important for those who will use their tablets for multimedia content.

Winner: Undecided, it depends on the user’s needs and preferences.

A key aspect of your future tablet has to be the battery because a tablet that runs out of juice too quickly is of no use. Fortunately, both the Nexus 10 and the iPad 4 have great autonomy, giving their users the freedom to use the devices quite some time before running dry. If we take a look at the numbers, the iPad has better autonomy than the Nexus 10. You can watch videos for 10 hours straight on the iPad before it will run out of battery, while the Nexus 10 only provides 9 hours of video playback time.

The iPad 4 scores points in the connectivity area, coming with 3G/4G LTE, (faster) Wi-Fi and Bluetooth, while the Nexus 10 only has Wi-Fi and NFC for now. This area will have to wait some time, until Google will release a version that will support data connections. As for external connectivity, the iPad has the new Lightning connector, micro HDMI port and standard 3.5 mm headphone jack. This is almost the same as the Nexus 10, the only difference being the micro USB connector instead of the Lightning port. The debate is still going on over which of these is better, so we won’t pick one over the other for now.

Winner: iPad, both on battery size and connectivity. 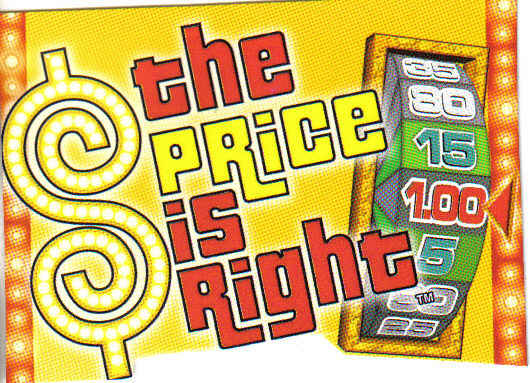 We have finally arrived at the point that Apple fans dread: Price. After all, this is what it boils down to in the end, and I do not think that anyone will be surprised to find out that the Nexus 10 is cheaper than the iPad 4. If you want to purchase the iPad 4, you will have to leave at the Apple Store $499 for the 16GB version, $599 for the 32GB and $699 for the 64GB version. On the other hand, Nexus fans will have to leave only $399 for the 16GB version or $499 for the 32GB version. That is $100 difference between the two, which, I think, is quite a lot. 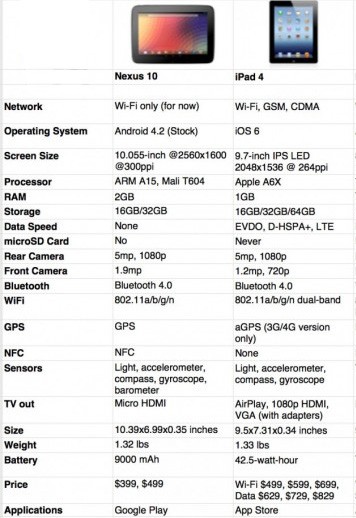 If we should go by the specifications, then the Nexus 10 would be the winner of this competition. But as I mentioned at the beginning, specs are not everything, and it would be next to impossible to say with certainty that one is better than the other. To its credit, iPad has a much greater number of tablet optimised apps. Based on what each tablet offers, the choice comes to each and everyone of you regarding who is the winner.