And here we are, at the end of our build. By this time, you’d have picked all your components and accessories and you have learned the basic principles of wire management. All that is left to do is put the puzzle together and start up your freshly built computer. Apart from building the computer, we will look at some troubleshooting manoeuvres, in case your computer does not start the first time (and it usually doesn’t).

Before we start, find all the tools you will need, and keep them close, you will need them in your build. Pick a spot where you wish to do your build (I would recommend using a big table) that has proper lighting. Also, before you touch any component, you need to make sure that your hands are not electrically charged, so touch the ground line from a wall socket and make sure you are not wearing clothes made out of synthetic materials, because these charge very quick.

Get your tools in order

Before you begin, bring all the boxes with components near you and your tools. For your build, you will need:

Once you check that you have everything at hand, start unboxing the components and their accessories, but remember to keep track of everything and not mix them up. After you have finished with the unboxing process, put the boxes away and you can now start your build.

Step by Step guide to assembling your computer 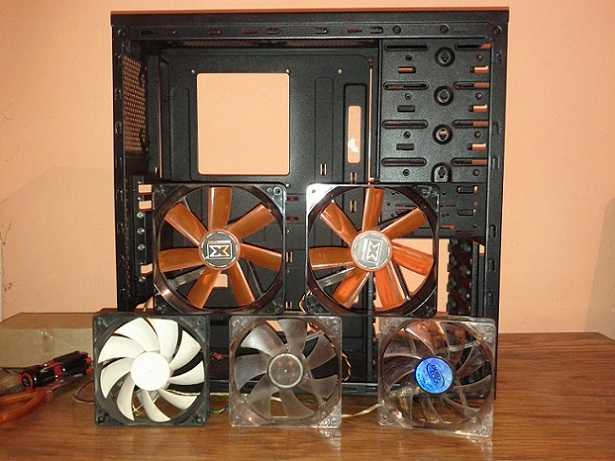 We will start our build with the case. By preparing the case, what I mean is mounting any additional accessories that you might have bought, such as fans, fan grills, dust filters or fan controllers. Also, on the motherboard tray, you will see some tiny holes. Take out your motherboard and see which of them line up with the screw holes in the mobo and then mount the special lifters that come with the case. 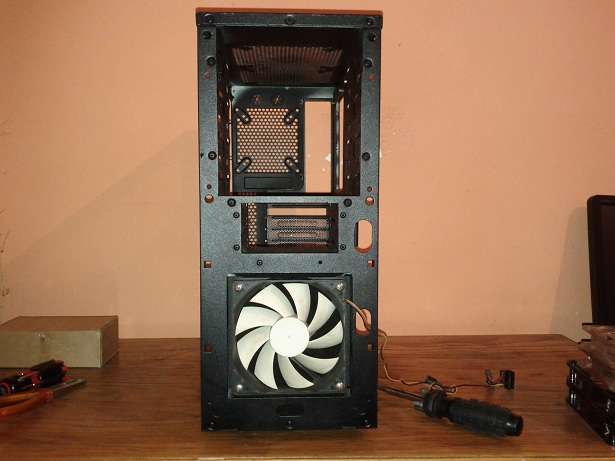 After this, run all the wires (the cables from the I/O panel) to the back of the motherboard tray and you are pretty much ready with the case. Also, at the back of the case, you will see the expansion slots. They have tiny covers that are hold into place by screws or clamps. Remove them, as you will have to mount other components here. You can put it aside and continue with the motherboard. 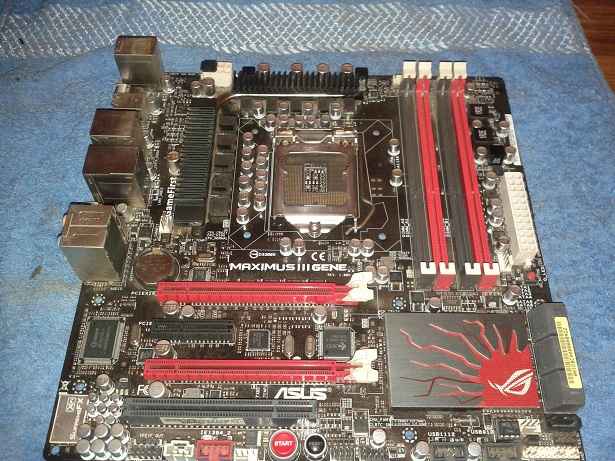 Now we start actually putting stuff together. Take out your motherboard and lay it on the table (do not put the motherboard directly on the table, but use a towel or the foam protector that it came with). You will have to remove all the stickers and covers from the slots you will be using and be very careful not to let anything in those slots (like dust or other debris). After doing so, you will move on to mounting some of the components.

After removing the plastic cover from the CPU socket (be extra careful not to touch the socket or let anything in it), bring your CPU and mount it according to the little triangle in the corner. You will see some kind of marker on the motherboard that lets you know which way to mount the CPU. DO NOT push it in! If you have aligned it right, it will drop into place perfectly. Now, close the bracket that holds the CPU in place. 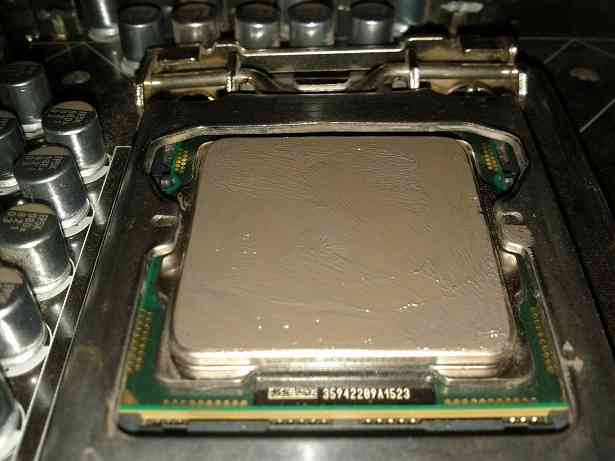 Applying thermal compound is optional at this point (assuming you have bought a new CPU cooler, it might have pre-applied thermal paste). Some coolers come with thermal compound already applied, but I would recommend getting some tissue and wiping it off. That stuff is pretty low quality, so you might want to buy a good thermal compound (something like Arctic Silver 5) and apply it to the CPU (do not apply thermal paste to the cooler).

There are many ways to do this. I can say that I tried all the methods (one line down the middle of the CPU, a blob in the middle, an “X” pattern on the CPU or to spread it out) and I must say I did not notice a difference in temperature. What I do know, is that the thermal compound layer has to be very thin (just enough to cover the CPU, spread it out as much as you can). So, only apply a very tiny amount and use your prefered method to spread it. 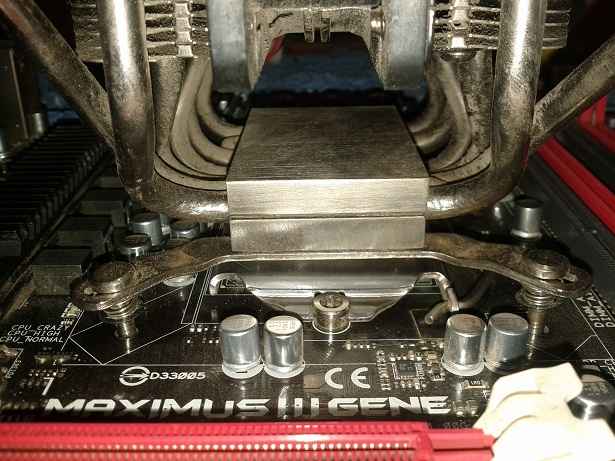 This depends on what type of cooler you have. Stock coolers usually have plastic push pins, which go in really easy: just line them up with the holes and push them down. But if you purchased an aftermarket CPU cooler, it might have a backplate. In general, order to mount it, first secure the backplate (on the backside of the motherboard with the sticky rubber grommets) and then mount your heatsink. In my case, I did not stick the grommets, and I first mount my cooler and the turn the board over and secure it. 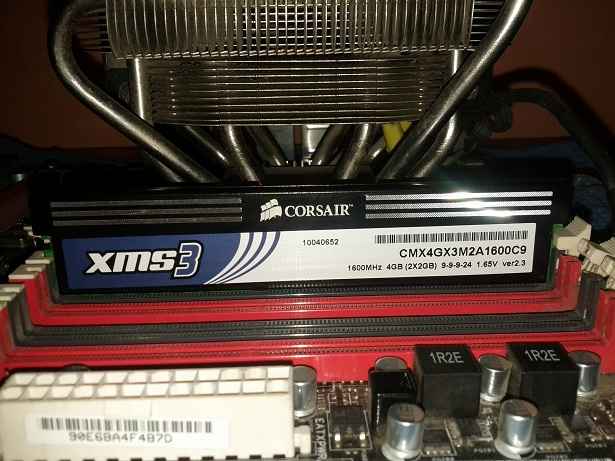 This step is very easy. If you look closely on the RAM board, you will notice a notch. Also, on the motherboard slot, you will see a pin. Position the RAM board so that the notch will be on the pin. Open the bracket and push the RAM board in. When it enters completely, the bracket will close itself. Be sure to mount the RAM with care, verify that it is inserted evenly and no part of the connector are sticking out. This could damage your RAM board or your motherboard.

Step 6: Mount the motherboard in the case 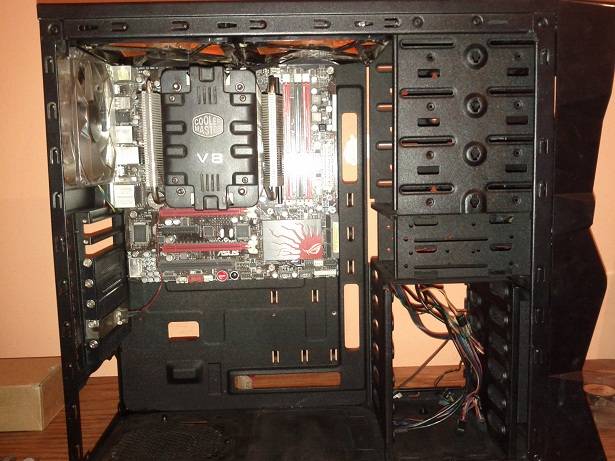 Now that you have mounted all your components to the motherboard, you can mount it in the case. Before you do so, however, you must mount the I/O panel on the back of the case. It attaches pretty easy, just put it through the inside of the case and gently push it until you hear the click. Afterwords, mount in your motherboard so the external connectors of the motherboard line up with the I/O panel’s cut-outs (also, recheck the alignment of the lifters in which the screws will enter). After you set it right, secure it with screws and you are done.

Step 7: Adding the other components 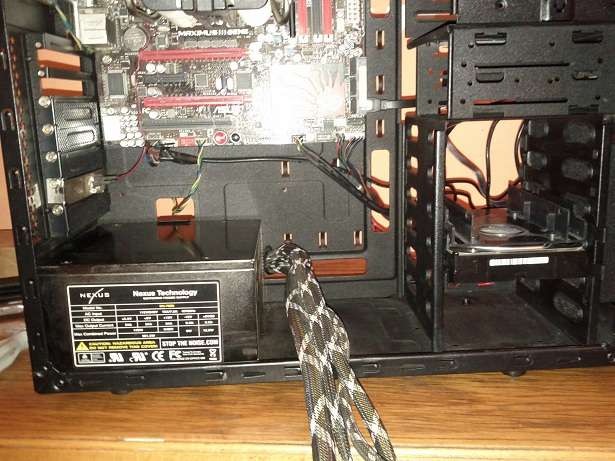 After you have installed your motherboard in the case, you can now add the other components: video card, LAN card, audio card and other that you might have purchased. Also, you can now mount the HDD, optical drive and PSU. If you have a modular PSU, mount it without any wires because you will add them later on. In the case of the video card, notice the holding bracket on the PCI Express slot. It is similar to the one on the RAM slot and it works just the same. Pull it back, align your video card and push it into place. The bracket should snap back in place, securing your card.

Now you can tighten the other components with the screws that you took out when you prepared the case (the ones from the extension slots). This will ensure that they are locked into place. When you are done, you can put back the other covers of the expansion slots, so you do not have openings between your components. After all is done, route your cables from the PSU out side the case if you have WM holes, if not, pull them outside the case, because you will be adding them one at a time. 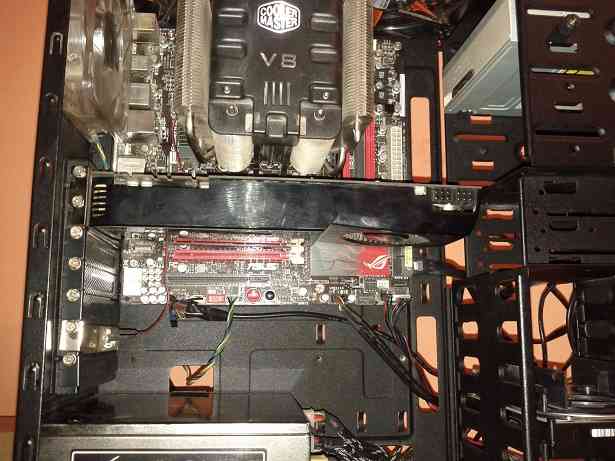 Probably the hardest part yet. Making the connections to your PC is something you need to make right, and to do is, you need to figure out what cables you need from your power supply and where they all go. You will most likely start with the 20/24 pin motherboard connection. this is the biggest, most ugly cable that you have. If your case allows you, you can route it along with the others to the back of the motherboard tray. The next one you should connect is your CPU 4/8 pin connector. In my case, this cable had to be routed inside the PC, not under the motherboard, but try to route it as good as possible, without putting tension in it. 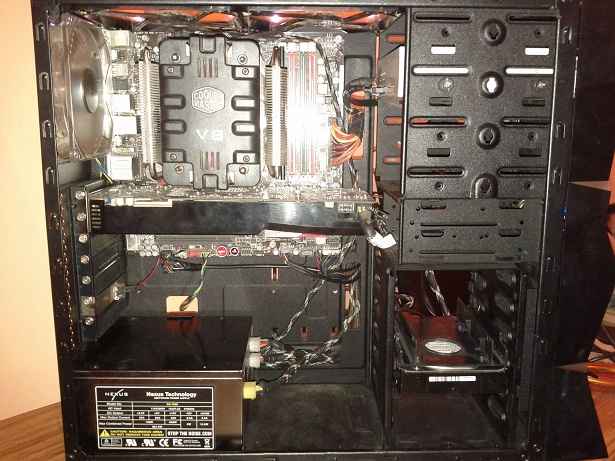 After making the motherboard power connections, start adding the other plugs, such as the front I/O panel (power, reset, USB and audio), data and power connections for hard disks and optical drives, video card and power to your vents. A quick tip before you start making your connections, check that all components are installed and before you move on to managing your wires, turn it on to see it everything works (just for a few seconds). If all is good, you can move on with your cable management. Be sure to have all your zip ties and wire pliers near.

Step 9: Final check and start up 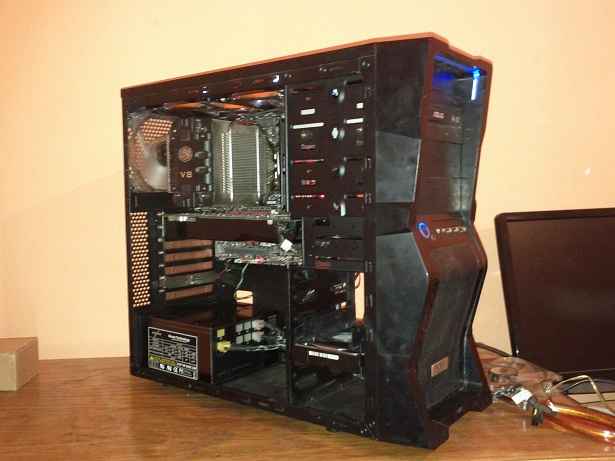 Once you are done, make a final verification to your system. Check if all the screws are tight and that no cables have been pulled out while you were doing the wire management. If everything looks properly connected and mounted, you should be ready to go. When you turn on your computer, do not put the cover back, but turn it on a do a visual inspection of the system, to see if there are no problems (short circuits, smoke coming out from some place and that everything works). If all is in order, go ahead and mount your side panels, and proceed to installing your OS. Your build is complete!

However, most of the times, you might encounter some errors in the system. In my experience, the majority of systems do not boot at first start. Do not startle, this things are common. The biggest problem would be if your PSU doesn’t have the power to run the entire system, in which case, you might have to return it and get a new one. Most of the time, a one or more connections are not made properly or some components are not mounted properly. Check everything again, and you will most likely find the problem. Also, check your BIOS to see if everything shows up and that all the components are running smooth.

And that’s a wrap. If you followed the steps properly, by now you should have a working computer, build by you. And I cannot explain the feeling when you turn it on and see that from a pile of components you have build a working computer. It’s like watching a baby be born.

Was this article helpful?
YesNo
TechPP is supported by our audience. We may earn affiliate commissions from buying links on this site.
Read Next
Use Any Phone or Tablet as a Secondary Display on Windows
#Computer #how to guide