DoorBot: Smart Wi-Fi Doorbell that Lets you See your Visitors

Two months after introducing Lockitron, the mobile key-less door locking system that made a sensation on KickStarter, DoorBot comes to impress our imagination once more. The project was first showcased on Christie Street and by the looks of it, this system will be a wireless smart doorbell that can transfer the video of your visitors directly on a mobile application, using a Wi-Fi antenna.

This can be the perfect set-up for those who wish to comfortably view the person currently sitting in the front of their porch or, for those who like to visualize who has knocked on the door, while they were away. As for those who wish to get even more out of the device, certain extensions can be applied and customers can even lock or unlock the premises for afar. 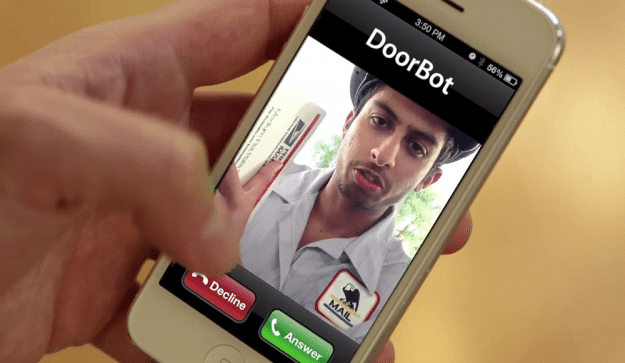 DoorBot is a project started by Edison Junior and can be simply described as an intelligent device that transmits an audio and video feed over Wi-Fi. In a few words, owners can view and communicate with the person found outside of the house, using the built-in microphone.

As a security advantage, the DoorBot has one way camera so visitors cannot see who is responding and best of all, if you are home or not. Moreover, the smart door bell allows owners to see who is at the door without actually responding and letting the outside world know.

Video and audio feed from afar

Hidden under a brushed aluminum plate and specifically designed to withstand most weather conditions, DoorBot can be easily set-up just outside of the door and it only requires 4 AA batteries to function for around one year. When the battery level is approaching the lower limit, owners will be notified using the built-in application.

The camera used by the smart door bell can be adjusted for most angles and in night-time, when the human eye cannot normally perceive images, an infrared sensor will kick-in and detect visitors properly.

After physically installing DoorBot outside the door, owners will have to download an iOS and Android application and, using the built-in Wi-Fi antenna, sync the device with the household network. When DoorBot has direct access to the network, users can access a feed for video and audio right from the smartphone app.

According to Christie Street, the price for a regular model reaches up to $169 and the device will be shipped until July, 2013. Those who wish a more powerful variant, DoorBot can be shipped with a Lockitron extension, which allows owners to control the door (lock, unlock and receive various other notifications) using the smartphone – for $319.

Zunpulse Smart Doorbell Review: a doorkeeper with smart home…
Google now lets you Van Gogh and Da Vinci your photographs……
TextSniper lets you Capture Text from Images and Visual…
Potion Lets You Set Up a Custom Domain for Your Notion…
Lenovo Smart Bulb, Smart Camera, and Smart Display Launched…
How to See Your Shazam History on iPhone and iPad