The Coolest Gadgets of CES 2013

From Nvidia’s gaming console prototype to Huawei’s king of phablets phone, there are many other gadgets that didn’t get as much attention as they should, perhaps. Here’s a list with what I think are the coolest gadgets from the year’s biggest technology event. If you have heard of other awesome gadgets, do let us know!

We won’t talk about TVs here, even if Samsung, Sony or LG have presented the some awesome devices: 4K UHD, OLED television sets. We also won’t feature here smartphones launched at CES 2013, because this is a list with not that kind of gadgets. Read on to discover what we’re talking about here! There’s no particular order, since it’s hard to say which is No.1 and which is not.

This list would’ve been much, much bigger, but since smartphones and tablets are becoming the center of our tech worlds, subsequently, many gadgets are tailored for them. So, check out our CES 2013 smartphone and tablet accessories post for that. For the “lazy” ones, you can check out the gallery with pics of these awesome gadgets.

Sony had a lot of things to show at CES as we’ve recently highlighted. And of the most interesting, yet small gadgets is the Sports MP3 Player from the Walkman series. You can judge from the video that it looks really sexy. And to be frank, I always wanted this kind of player, one that would just stick around my ears, with no extra wires. It’s the perfect device for jogging, swimming or working out. It has a 4 GB memory and 8 hours of playtime. Walkman Sports MP3 Player will be available from March at $100 and will come in blue, pink, white, and black.

Lego is that kind of toy that appeals both to kids and adults. If before we were used to assemble the Lego with our hands and to move it on the floor, things have changed. The Mindstorm EV3 is built on Linux and is tailored to work with your Android or iOS device. Those willing to spend $350 on this, will be able to control it with their smartphones. Parents get concerned that their kids spend more time in the virtual world, but this is an interesting toy that links programmable software to real-world hardware with physical actions.

Remember when we talked about Liliputian’s battery that could provide your smartphone or tablet with 2 weeks of juice? Well, it wasn’t just talk, we now have a real product at CES and a price – $300. The price is a huge drawback, of course, but those that are in desperate need for such a device, won’t hesitate in paying the money. You’ll only need an USB cable to perform the recharge, without any batteries at all. The Nectar Pod is swappable and when it’s fully depleted, it will cost $10 to get another one.

The 3D printing industry is getting more and more attention and 2013 could very well be its year, if we can say so. And CES 2013 was a good occasion for a number of 3D printer and 3D printing technologies to be showcased. It was pretty hard to name just one 3D printer, since they are all pioneers in this industry. We’ve previously talked about some cheap 3D printers, 3D printed houses and even 3D pasta printers! Some 3D printers at CES 2013 are yet to be “discovered”. Here are some of them (hope I didn’t miss any):

Probably most of us won’t be able to afford this one, but it surely is awesome! Just think about it, 1 TB of space in such a tiny device. This expensive, but highly portable flash drive comes with zinc alloy metal casing and has a 5-years warranty. Just how expensive it will be we don’t know, but the 512 GB version costs $1750… Leaving aside the huge prices, it’s still unbelievable that they’ve managed to put 1 TB inside such a tiny device!

It amazes me what kind of medical gadgets people create. Panasonic introduced the RP-BTGS10 wireless headphones at CES where your cheekbones are used to deliver audio to your head. Wait, what? Yes, this kind of technology isn’t actually new and has been around for a while. To put it shortly, Panasonic’s headphones use your skull bones to transmit the sound to your inner ear. It will also help those with hearing problems that don’t affect the inner ear. The price is yet undisclosed.

Remember Parrot, right? The already reputed company that makes AR Drones (and one of the “culprits” that made Obama sign the legislation allowing it) has stepped up its game and created a quite ingenious gadget – the Flower Power. I am sure there is a category of people that will go crazy about this – gardeners! The Flower Powers is a sensor that comunicates wirelessly via some dedicate mobile apps. It measures your plant’s sunlight, moisture, temperature and fertilizer. It has 6,000 plants in its library, so probably it will recognize your flower. You may think it’s weird, but it’s ingenious, nonetheless. We can only hope it will not be too expensive!

If you’re crazy for bike rides, then you’re probably going to like this awesome gadget. As far as it concerns, whenever I go for a bike ride in the park, an mp3 player is a must. But what if you could have a big speaker on your bike? Obviously, the problem would be with the people around you – you might annoy them with your noise. But if you’re going for a ride in the forrest, it should be fine. It has the design of a watter bottle and its traditional positioning, too. The speaker is shock and waterproof. It will connect via Bluetooth to your Android or iOS device.

Tobii has been working on this even in 2011. If at CES 2012, there was only a demo from Tobii, at CES 2013, there is already a working device. Rex is the computer accessory that allows you to control your Windows 8 computer with only your eyes. It adds an eye-tracking interface via the USB port to any Windows 8 computer. This makes eye-controlled smartphones and tablets closer than ever! We don’t know yet the final price, but the developer edition is at $995. You’re probably not quite sure who’ll pay this money, but think about those unfortunate situations when people can’t use their arms to interact with the computer. For me, this is really revolutionary technology.

We’ve got much, much more content than we used to have before. Our new cameras and smartphones produce images that are quite big in size, we record Full HD movies that take up a lot of space, we watch Blu-Ray movies and so on…All this requires a lot of spaces. Seagate knows it and they also know that we want instant access to our files. Wireless Plus is a portable hard drive that doesn’t need Internet connection to all you to acess the files stored on it. It has 1 TB, SuperSpeed USB 3.0 adapter, 10 hours battery life and it has the ability to create its own Wi-Fi network. This is terrific if you plan on taking your files with you. And the price seems alright: $199 for 1 TB.

Right now, we don’t know too many details about the Huawei Media Q, besides the fact that it will be a companion device for Huawei smartphones. It will be a physical cube, some sort of a Nexus Q. It is said to have voice search functionalities and the ability to facilitate HD voice calls. At the moment, we don’t even have a picture or more details. But it’s obvious that Huawei wants to provide one extra reason to buy Ascend D2 or Mate smartphones.

How many times you’ve been to a wonderful place and you simply wanted to enjoy the view, without having to hassle with recording it. I know I have. For such moments, Panasonic has launched the HX-A100 wearable camcorderd. It provides Full HD recording capabilities and even has a waterproof case, allowing you to go 5 feet under for maximum 30 minutes. You can attach it to a helmet or head gear to record or if you don’t have those, it has an ear hook. And what’s uber cool is that it has Wi-Fi connectivity so it allows for live streaming. Imagine yourself jumping with a parachute and streaming all this live to your friends. For $300, it is said to provide 140 minutes of recording. 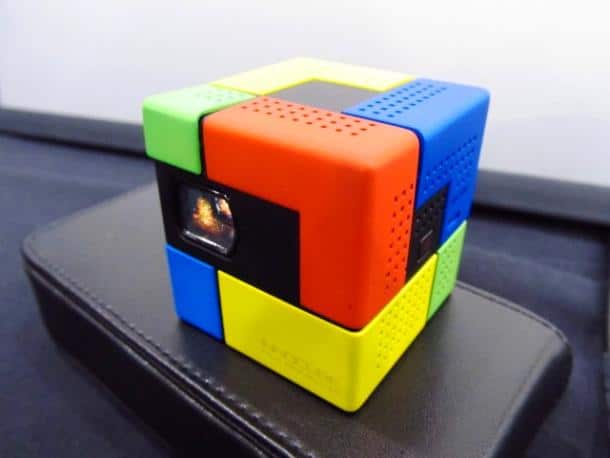 This is one very, very cute pico projector that will certainly appeal to your kids. And you probably won’t be surprisde to know that it’s actually aimed at them. With a Rubik-like design, Innoio’s Storytime Projector has a serious promise of keeping your kids mesmerized by its projections on their room walls or even ceiling. For grown-ups, you might want to check out our selection with more “serious” projectors. Storytime Projector is already available in South Korea and could come to US by the end of Q1. For $200, it will offer a WVGA resolution of 854 x 480, output of 35 lumes and a 50-inch image from 3 to 4 feet. 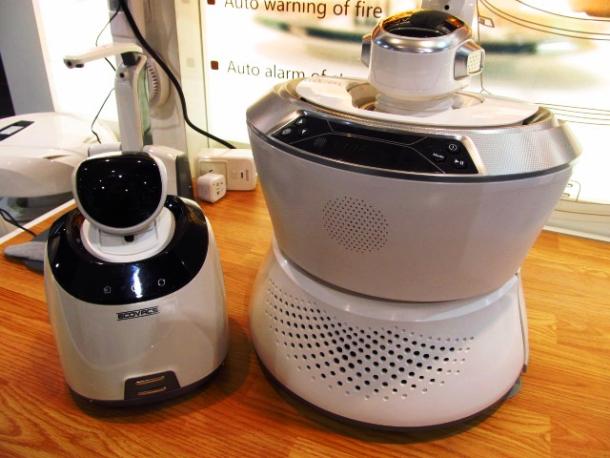 As a technology lover, I always wanted to have a robot, but a very smart one. I hope that one day I’ll be able to buy one. At CES 2013, Ecovacs presented a very smart roaming robot that has the purpose of cleaning the air in your house. So, it will patrol on the floor of your home and when it will detect a dirty zone, it will purify it. But Famibot doesn’t do only that, it also has cameras and lets you see what’s going on at home. A chat function allows you to discuss with elders. And if this wasn’t enough, tt can also play music, allow you to control your air conditioner or lights and send alerts if there is an unexpected person in the huse. It can even tell you of a possible smoke that could cause fire. All this for $900.

Thanks to Kickstarter, the world around us is changing and this is very, very true. At CES 2013, there are a lot of projects from Kickstarter, some of them that are already hitting stores and others that are yet waiting for a full funding. Puzzlebox Orbit is a brave product that probably seemed extracted frome a Sci-Fi novel a few decades ago. It allows you to control an helicopter toy with your mind! With a bluetooth device, this awesome gadget can transform brainwave data into flight commands. So, if you concentrat pretty hard, you’ll manage to make it fly! It will cost $189

OnePlus set to make its CES debut with the OnePlus Concept…