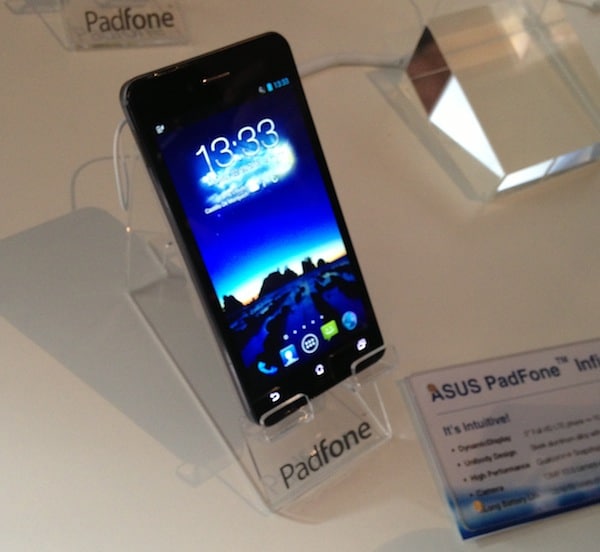 Asus has just unveiled their latest flagship Android smartphone (along with the station) for 2013, the Asus Padfone Infinity for a whopping price of 999 Euros. As has been the norm with smartphones being announced this year, Asus Padfone Infinity will boast a large 5-inch 1080p Full HD display with 441 ppi with anti-fingerprint coating, and will dock inside a tablet with 10.1-inch 1080p display.

The Padfone Infinity will be powered by a 1.7GHz Snapdragon 600 processor, Adreno 320 GPU and 2GB of RAM. Users have the choice to either pickup a 32GB or 64GB version. It boasts a 13 MegaPixel shooter on the rear, with an LED flash, five-element, f/2.0 lens and burst shooting at 8 fps. There’s a 2MP front camera for video calling. Asus has teamed up with Sonic Master for the audio, and the phone will have speakers on the sides! Also, Asus is providing a 50GB free web storage.

Asus has included a new voice-assistant called the Asus Echo voice agent in Padfone Infinity which is similar to Siri & S-voice. It’s true that Padfone Infinity comes with a phone and a tablet (both with stunning displays) but the price is still very steep. Together with the station, the “system” weighs almost 700 grams, so it’s not actually light on your hand. Let’s have a look at the entire technical profile:

Was this article helpful?
YesNo
TechPP is supported by our audience. We may earn affiliate commissions from buying links on this site.
Read Next
Asus ROG Flow X13 Review: Power-Packed Convenience
#Asus #mwc 2013 #Padfone Infinity