Tablets are getting increasingly popular and almost all major manufacturers are trying to cram as much power as they can in an increasingly smaller space. Although the slight differences appear from manufacturer to manufacturer, they are usually not even noticeable. However, this year at Mobile World Congress, Sony has managed to take it to the next level, and they’ve come up with the thinnest tablet in the world: Xperia Tablet Z. 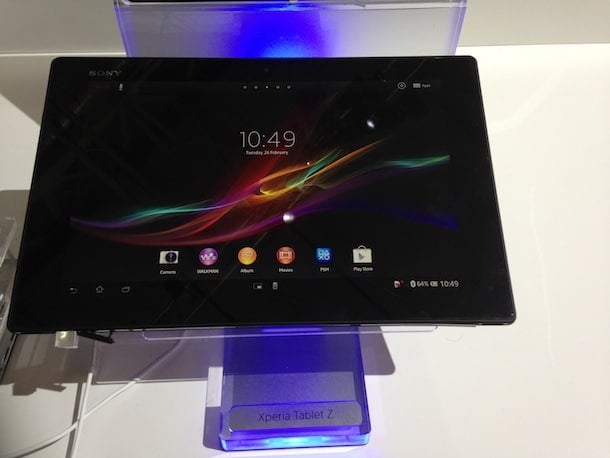 Alongside the incredibly thin body, Sony has also added a number of great features and all of them are backed up by some serious horsepower. Keeping in mind that the device is only 6.9 mm thick, this is an awesome accomplishment that many other manufacturers have not yet achieved. Now that we’ve gotten you’re attention, we’ll go through the technical specs of the Xperia Tablet Z and see what it can do.

Sony has created an awesome looking device that dazzles users with a 10.1 inch Reality Display with a resolution of 1080×1200 and with the Mobile BRAVIA Engine 2 for some extra kick. The is the most prominent feature of the Xperia Z but under the hood of this tablet lies a lot of power. For starters, Sony has used the Snapdragon S4 Quad-Core Processor clocked at 1.5 GHz and this coupled with 2 GB of RAM make for a very responsive and blazing fast tablet that has an incredible display.

Other features that Sony have implemented in the Xperia Z are IR (Infra-Red) emitter that allows the user to use the device as a remote control for other appliances, which is an awesome use for a mobile device and we’ve seen this feature installed on the LG Optimus G Pro also. The Tablet Z runs on Android 4.1.2 that was slightly modified by Sony in order to add a few other features like custom apps and widgets.

In terms of cameras, we would have expected Sony to go all out and install the best cameras they could, but they only went for a 8 MP Exmor R for Mobile shutter in the back and for the front they have installed a 2 MP (which is still better than the ASUS Fonepad). The Xperia Tablet Z is NFC enabled for better connectivity, making it easy for users who have NFC accessories, like the ones featured at CES 2013, to connect them to the tablet. 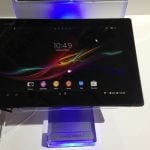 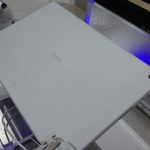 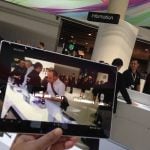 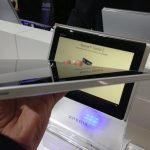 The sound is given by the S-Force Front Surround 3D system which has stunning quality and even in all the noise from MWC, we were still able to hear it very well. Also, the Tablet Z is kept alive for a longer period of time thanks to the Battery STAMINA mode, a feature that Sony has implemented in order for users to make the most of their 10.1 inch jewel.

The body of the Sony Xperia Tablet Z is very slick, having slightly rounded corners and glossy surface on the screen (which is a fingerprint magnet) and a plastic back that helps keep down the weight. Although the plastic back does not feel premium, it doesn’t feel cheap as well, and the design of the Tablet Z is very clean with only a few small logos that are very well integrated in the overall design.

The first thing you notice about the Tablet Z is the incredibly thin body, and when you pick it up, you notice how light it is. The feeling is very similar to the experience we had when we first lifted the iPhone 5. This makes it very easy to handle, and it’s an absolute pleasure to use it. Add this to the fact that Sony Tablet Z is water-resistant and dust-proof, it suddenly becomes a compelling tablet to consider as your next purchase.

Is the new iPad Mini 2021 the only “Real” Apple Tablet?
Read Next