Samsung has officially confirmed that it’s working on a smart watch for a long time, without divulging more details. In an interview to Bloomberg, Lee Young Hee, executive VP of Samsung’s mobile business confirmed company’s plans for a wristwatch in the near future.

This comes after numerous reports of Apple working on its own Smart Watch (iWatch), with almost 100 designers in the team. The recent success of Kickstarter projects like Pebble, which raised over 10 million last year, has spruced up the demand for Smart Watches.

The rumors of Samsung smart watch started back in February this year, when mockups of a gadget codenamed Galaxy Altius surfaced on a Korean website. It shows a squarish interface with live tiles showing you different apps and functions. A report on Reuters quotes an unnamed source who claims that the watch will perform many of the functions of a smartphone.

Apple’s iWatch is rumored to have a curved glass display and possibly run a modified version of iOS. As always, Apple has been extremely secretive of the project, but looks like Samsung is trying to one-up Apple’s plans by announcing the project before-hand. As Verge reports, this isn’t the first time Samsung has tried its luck with wrist watches. In 1999, the company released the world’s first watch phone, the SPH-WP10, and followed it with S9110 (pictured below) in 2009 for €450. 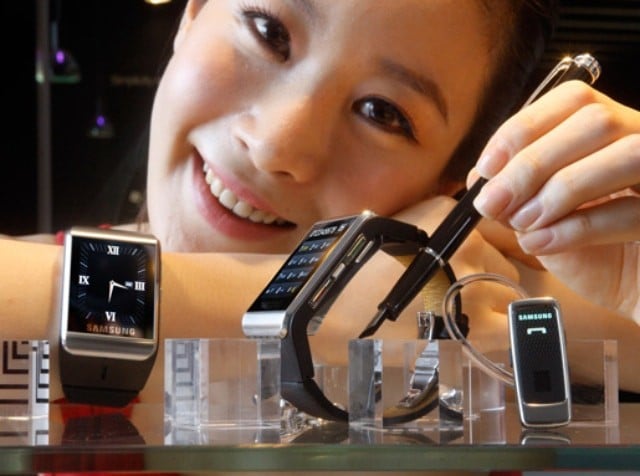 The smartphone market is expected to slow down drastically in coming years. According to Bloomberg, the smartphone growth is projected to slow to 9.8 percent in 2017 from 27 percent this year. This should explain why both Apple and Samsung is looking beyond smartphones and banking on smart watch market. According to Citigroup, the global watch industry will generate more than $60 billion in sales in 2013.

The recent developments have confirmed that wearable technology is the latest trend and here to stay. We saw numerous examples at CES this year, of small companies coming out with innovative products like fitness accessories for smartphones, 3D glasses and more. Now seeing the biggies like Google (with Google Glasses), Apple (with iWatch) and Samsung (with Galaxy watch) only confirms that it’s time for wearable tech to go mainstream.