7 Emergency Apps Every iPhone and Android User Should Have

There are certain applications that do not have a proper use in day-to-day activities, but they may prove a necessity in critical situations. Whenever a hurricane strikes, a massive flood is coming or a snow that treats to lock you down for a couple of days is announced, you must be warned.

A second category addresses those that already are in trouble. Whether is a car crash, a flash flood or a tsunami wave, there are some options for both Android and iOS users that might make the difference. As we’ve said it in numerous occasions, communicating is vital in critical situations.

The Most Helpful Android and iOS Emergency Applications

After a quick search on the Apple AppStore and on Google Play, we’ve found the most relevant, and note-worthy emergency applications. Most of them are free to install and do not require any other incentives to be used, but there are some titles in the list which can also be purchased. Take a look and see what you like. We recommend installing several of them,  just to be covered in different situations. Also, some names may only work in a limited number of countries. 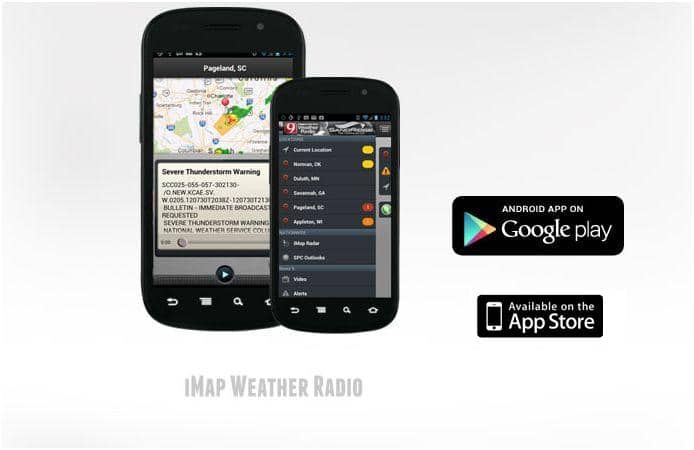 Starting with the desert, iMap Weather Radio is an intelligent weather station that tracks location and warns the user only when he’s inside dangerous weather zones. Tuning to national weather alerts, this Android and iOS compatible software may mean the difference between life and death, for someone.

Users have the possibility of allowing the app to constantly track their location, meaning that protection will be assured at any time and even without user intervention. The other option is to manually add some zones in which you want to receive alerts, but this means that user intervention is required whenever traveling out of those zones.

Alerts work pretty nice and perhaps the most beautiful thing about iMap Weather is that it only disrupts the user when one of his zones enters a warning perimeter. When this thing happens, the smartphone is automatically awakened and direct streaming of video news is given right from the menu. This way, the user may find out precisely how endangered it is. 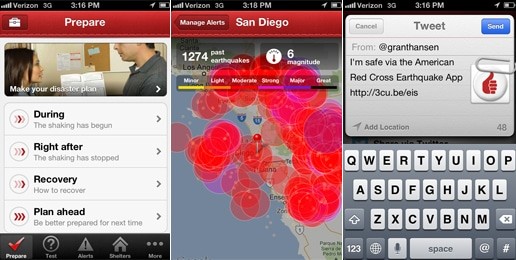 Those living in USA can count on the American Red Cross organization for warnings of any kind. At the moment, the Red Cross offers several emergency apps for both Android and iOS, which should help people in case of threatening cases.

Usually, every app in the quoted suite monitors weather conditions in your area and when an incident is spotted, the app chases it along the path. Afterwards, users are given step by step instructions on how to remain safe, how to contact their family and where to hide during the scenario.

The whole suite is composed out of several different apps, each suited for different emergencies and with different features. All of them are available for both Android and iOS, but the bad part is that you will have to download each title separately. Here are the most important one:

A rather curious entry is Your Plan, a free iOS-exclusive title that helps people realize what to do after a disaster strikes. Whether we are talking about hurricanes, wildfires, earthquakes, tornadoes or sub-zero temperatures, this evacuation application will help you design a safe escape plan.

Coming loaded with a range of predefined checklists aimed to help you figure out your own path, this application was described as being very detailed and helpful in tough situations. Basically, by helping people realize how to escape from certain scenarios and locations, users become more aware of their options and when bad things happen, they are more prepared.

As the screenshots above show, you can start from scratch by creating a brand new escape list, which will remind you to where to hide in the event of an evacuation or, who to call first. Besides a simple check-list, this application stores important information completed in the list, information which can then be extracted when bad things happen. 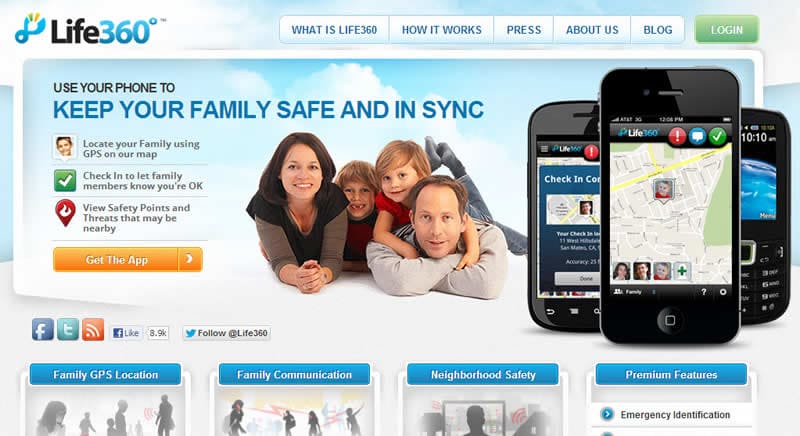 I don’t know how many of you can argue with the fact that family is the most important element in our life. During a natural disaster or a through a dangerous situation, I believe it’s critical to know if family members are safe, and most of all, where are they located. Well, Life 360 Family Locator does precisely this.

Through the use of a private map, Life 360 allows owners to receive alerts when family members reach specified locations and track misplaced or lost phones. Moreover, users are able to send messages inside their limited circles so whenever you want to reach a family member, access will be granted swiftly. Pairing these with a couple of other features, such as encryption, proprietary GPS and cell triangulation locator, makes Life 360 a perfect choice for many users.

The application is free to install for Android, iOS and BlackBerry users. 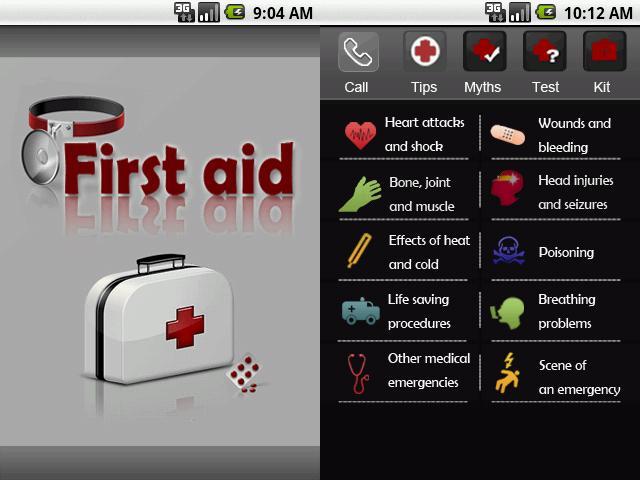 Another helpful emergency application is First Aid, by Health Team. Coming free of charge and only in some countries, this service aims to help users with knowledge about usual medical emergencies, like a broken rib, head injuries, breathing problems, poisoning or heart attacks.

The beautiful thing about this software is that depending on the emergency, untrained users can be guided with step-by-step instructions into resolving the medical issue. For example, if you see someone on the street with a breathing problem, you can help right away by tapping the associated menu and following instructions. Usually, they are simple to use and solve common complications in a snap.

You may not need it each day, but it’s important to know what to do when something bad happens. First Aid is available only for Android. 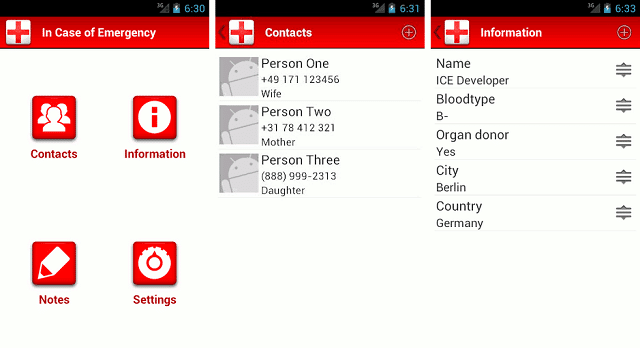 Although we talked about a lot of mobile apps that aid you in critical situations, you might wonder what happens when you are incapable of moving, or thinking. There are big chances to suffer damages during a hurricane, earthquake or a tornado, so when someone finds you maybe he needs to know important information, like the phone number of a dear friend or allergies to certain drugs. Well, there’s an app for that.

Meet ICE: a simple Android title which stores vital information on the smartphone and offers it to whoever is smart enough to check it. Usually, those using this service store their personal name, blood type, the place they live and other stuff like that.

Moreover, ICE can also automatically send this pre-defined list of important details to whoever you decide, at the simple push of a button. Through the use of the home-mounted widget, when you are in a tough situation, your family will be announced of your location and authorities will be called instantly, with one click.

We’ve found ICE two times on Google Play, and each version has its specific features. Fortunately, they are both free. 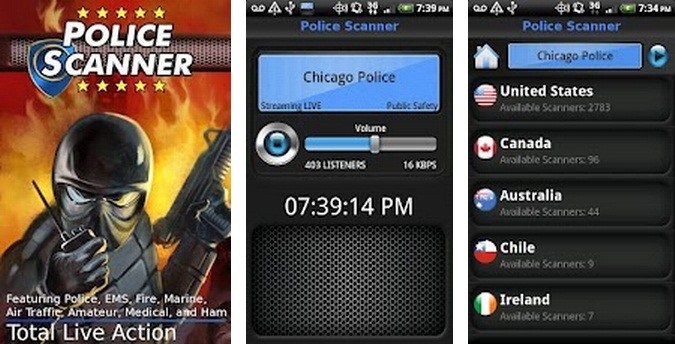 Believe it or not, there’s a way to capture police and other public-restricted frequency with an Android application. Known as Police Scanner, the motivation of putting this title in our emergency list is that usual, when large disasters happen, communications and power lines suffer damage. Therefore, a tricky way of listening what’s happening near your location and be informed is by getting the apples right from the source.

In a few words, Police Scanner brings you more than 2,500 hidden frequencies used by police, fire, rescue and other services, right over 3G or Wi-Fi. These channels can be filtered by selecting a specific country or, by allowing the built-in GPS feature to track your location (this one is more precise). Afterwards, channels can be saved for later or even left running in the background.

The best part is that when you are not using the app for emergencies, you can listen to a lot of weird (and funny) stuff.

Missing SHAREit? Try Snapdrop, the AirDrop for every…
[First Cut] Samsung Galaxy S21 Ultra: Ultra in every way
10 Essential Offline Apps (Android and iOS) for When You…
iPhone 11 vs iPhone 12 vs iPhone 12 mini: which one should…
Dude, which OnePlus 7T should I go for? (Or should I just…
[Review] Alexa, Should I Order the New Echo Speakers?…