Have you ever gone somewhere and forgot to recharge your smartphone? I know I have, and many others out there have dealt with the same issue since the smartphone era has begun. While the battery power of mobile devices has not improved too much in the last years, many have started to look towards other gadgets, such as portable battery packs or charging devices.

Even with the drawback of having to carry around another device, the portable battery pack is almost worth its weight in gold, and for those of you who do a lot of work on a smartphone, it is a necessary device to have around at all times. There are a few of these portable battery packs out there, but a new Kickstarter project aims to take it to the new level: the Limeade Blast.

What makes the Limeade Blast stand out? 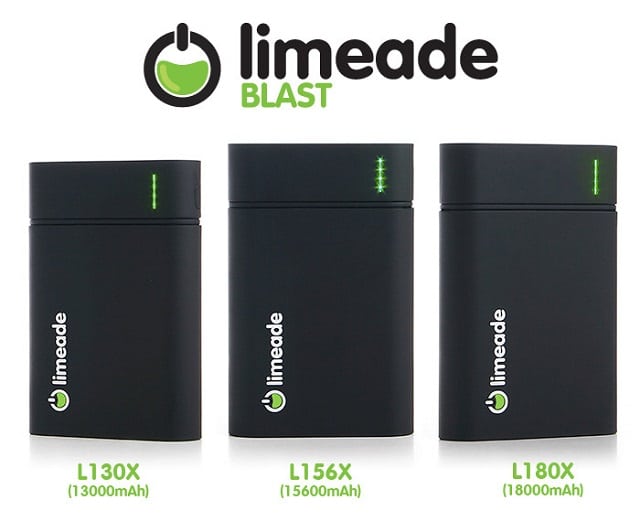 Limeade Blast is a portable battery pack that can help you charge almost any mobile device you might have. Thanks to its slim body and the amount of power it has, it can be a lifesaver on more than one occasion. What sets the Limeade Blast apart from other similar devices is the fact that its high capacity batteries are small and lightweight, making it easy to fit in a small body of only 24 by 114 mm. This makes carrying the device very easy.

The engineers also made it extremely simple to use, and by adding a few extra features, they made it even more useful. The company will offer users three models for them to choose from, and while each of them offers the same basic features, they have different capacities. The three devices are:

What features can you expect 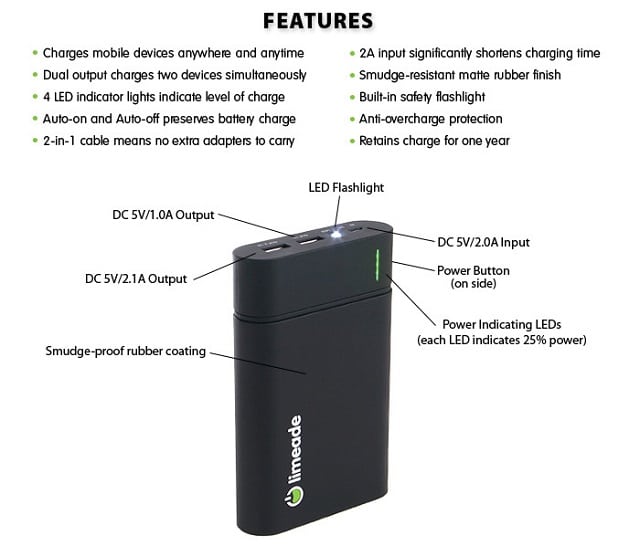 The creators are very proud that their external battery pack has an industry first input charging level of 2A, while other devices on the market work with only 1A inputs. This makes the battery pack faster to charge, ranging from 8 – 13 hrs, depending on the model. The level of the charge can be seen via the 4 LEDs that indicate how much juice you have.

The body of the device has a nice rubber finish, making it easy to handle. The power button, located on the side of the device is also the toggle switch for the integrated LED flash that can act as a flashlight if you are in need of one, this very bright LED is located on the top. On the top of the device, you can find the 2A power input, as well as the two USB charging ports.

Each of these two USB ports can power a device with a different current. One of them can push 1A to any smartphone or tablet whilst the other USB port can push a current of up to 2.1A. Typically, the 1A port is used to charge smartphones, while the more powerful one for tablets or other devices that have bigger batteries. They are backwards compatible, so you can charge two smartphones or a single smartphone to the 2.1A output without the risk of damaging your device.

Once you’ve plugged in your smartphone or tablet, the indicator LEDs will turn blue, and you will immediately see your device starting to charge. Thanks to the high power batteries, you will be able to charge your smartphones or tablets multiple times on one charge of the Limeade Blast battery pack. With the L180X battery pack you will be able to charge multiple devices for quite a while: 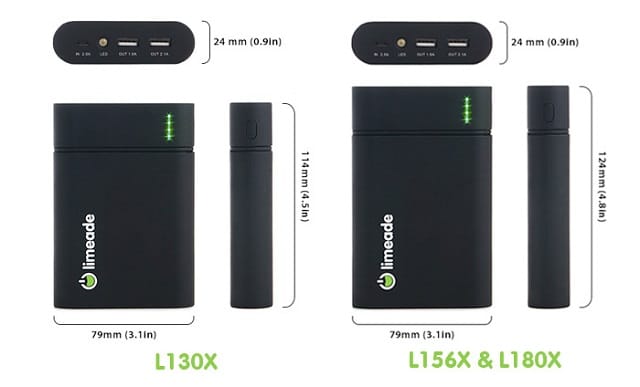 As you can see, the Limeade Blast can power up multiple device many times, but if you are interested in knowing more details, here are a few technical specs. Do note that all 3 devices have over 500 lifetime cycles.

Ease of use and compatibility

With the Limeade Blast you will get the 2-in-one cable that has a standard USB plug at one end and a micro USB / 30-pin Apple connector at the other end. The device does not come at this moment with the new Lightning connector. The same cable is also used for charging the Limeade Blast battery pack as well. You plug the standard USB into a car charger or a wall charger (either a 1A or 2A charger, however, it is recommended that you use a 2A charger, similar to the Apple default wall charger).

If you were wondering what devices can you charge with the Limeade Blast battery pack, then you can rest assured that it will power up any device that has a micro USB or a 30-pin connector. So, practically any Apple handheld device or other smartphone, digital cameras or portable game consoles.

Also, keep in mind that the Limeade Blast battery pack will not be capable of charging a laptop, as its output voltage is only 5V and most laptops use apx 18V to work. Also, the device does not allow pass-through charging, which means that if your Limeade Blast battery pack is out of juice and you plug it in to charge it, you will not be able to charge another device from it until it has been charged or unplugged.

As you might know, there are other device out there that are pretty capable of charging you smartphone or tablet, so what makes it stand out? While its features might be similar to other models out there, the slim body, light weight and ease of use are some of Limeade Blast’s strongest points. Not to mention that it comes in three flavours and the biggest battery pack can hold up to 18000 mAh. Other similar devices that offer similar performance are:

While these devices are similar in performance, most of them cost more than the current price of the Limeade Blast, which starts from $49- the pledge on their Kickstarter page. So, if you are interested in this gadget, then you might want to check them out and see more about the Limeade Blast battery pack.

Qualcomm Quick Charge vs OnePlus Warp Charge vs Oppo VOOC vs…
Explained: Juice Jacking
Delhi government uses Google Maps to fight hunger in…
[App Blog] "Apple Was Too Scared to Acquire Me": A Crazy…
Tech advertising in times of Covid-19: Not just about…
Stepping outside in Covid Times? Look at Google Maps before…