Working in the business area might be quite difficult nowadays due to the fact that this job implies a lot of travelling and being away from home most of the time. Whether travelling by car, plane or train, it’s very important to get the maximum out of the time lost while moving or, while waiting in a hotel room.

As you may well know, there are several applications, gadgets and gears that can help a business traveler accomplish tasks easier and, in style. Even though there are hundreds of these options available, in the following lines we’re going to talk about the ten most interesting tools that can come in aid. 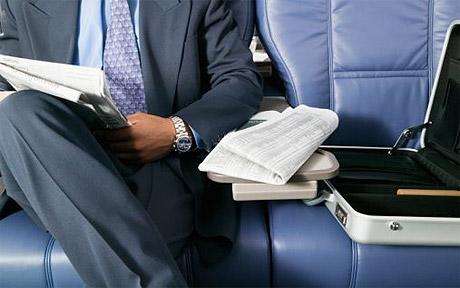 Taking into consideration that many devices can help to schedule everything, it is very important to adequately use them and not to lose a lot of time with booking a flight, finding a good hotel or your luggage at the arriving terminal. And with so many options that are on the market, finding a solution to make your next business trip less exhausting is very hard to find. 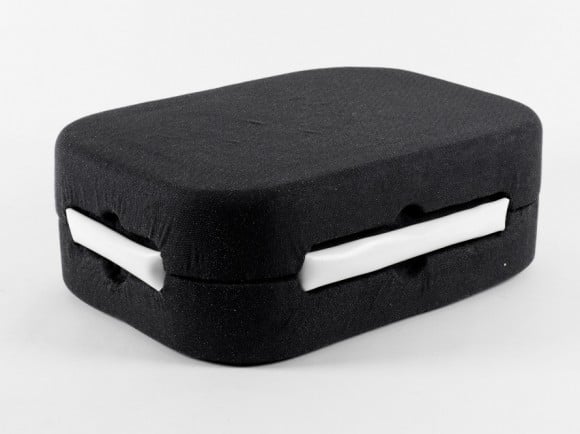 Hop is a dream not only for business travelers, but for any common person who travels, regardless of their reasons. This special suitcase doesn’t need to be pulled through the airport because it follows the user wherever he goes. Basically, the suitcase is connected and controlled by a smartphone using Bluetooth.

This suitcase is equipped with three sensors that triangulate the signal from the smartphone and with the help of a microcontroller, Hop calculates the position of the user considering its own. The same microcontroller controls a caterpillar system based on compressed air and keeps the suitcase near to the user, following him with every move.

In spite of Hop’s ability, you should keep your eyes on the bag because an airport is a very crowded place and it might get lost. In case the suitcase loses the signal, it locks itself and vibrates the user’s smartphone to draw his attention. Unfortunately, the suitcase is not quite ready for launch, but it’s on the right tracks and in the near future it will be on market.

For those moving from town to town, another handy gadget would be Phorce. This is a smart bag that comes with enough battery juice to power several devices, including smartphones, small laptops or cameras. We have a full review on that one. 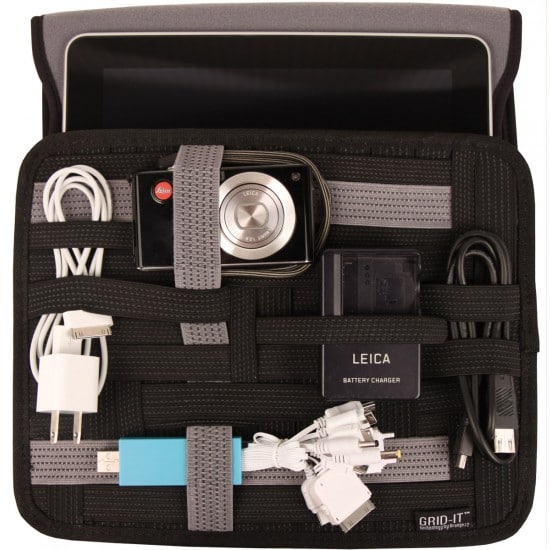 When traveling, we need to take special care not to forget small accessories, especially something vital, such as chargers for phones or cameras. Grid-it iPad is an organization tool made from elastic bands specially designed to hold personal objects in a tight space.

Grit-it iPad also comes with a special pocket where you can store your iPad, which will be folded with a neoprene cover to protect all items inside of it. This tool weighs only 460 grams and it is compatible with multiple devices, such as the Apple iPad, Samsung Galaxy Tab, Motorola Xoom and so forth.

This nice gear can be configured in endless ways, it just adapts to the user’s needs and size of devices, thanks to the rubber bands that stretch to hold everything together. For those interested, it can be bought for $29.99 from the official store. 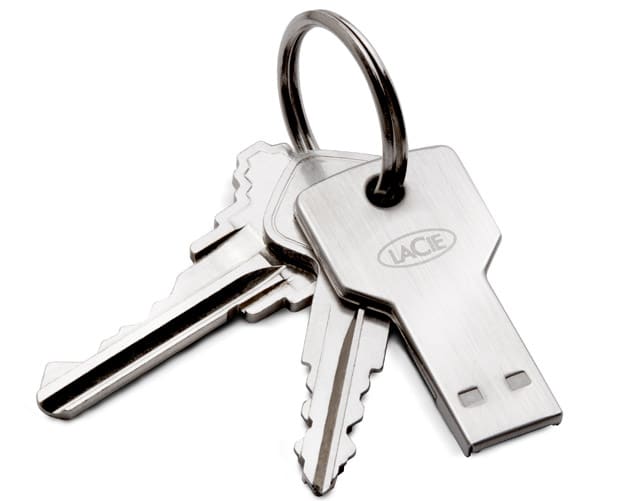 The new solution from LaCie, PetiteKey, is a small thumb drive with a capacity of 8, 16 or 32 GB. Now, you don’t have to be afraid that your external drive will break and lose all data because this mighty USB stick is as though as you can get. PetiteKey has a compact design and it is made from a resistant material which offers maximum protection.

This device is resistant to splashes and spills, but the most impressive thing is that it is 100 m waterproof so that you will never have worry about swimming in a pool with your keys in your pocket or forgetting them when you do laundry. In addition, its connector is resistant to scratches, making this thumb drive ideal for traveling.

Also, LaCie PetiteKey can be password protected with LaCie Private-Public software which has a 256 bit encryption algorithm implemented. If you are interested in buying one of this thumb drives, visit their official store and get one 8 GB PetiteKey for only $14.99. 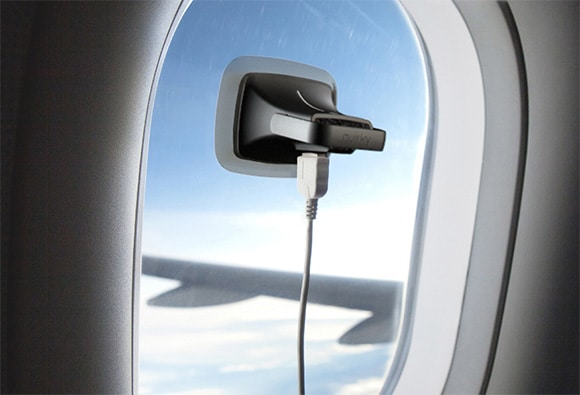 You are always in a plane and have to use digital devices? The main problem is the battery that drains so quickly and for your ten hour flight, what options do you have? Quirky thought about this problem and invented Ray, the solar powered charger.

The Ray charger is all about portability, needing only some light to function properly. Whether going to work in the morning with a car or traveling by plane for business purposes, Ray can power-up gadgets simply by attaching to a window and transforming the Sun’s beams into pure electricity.

Ray has a powerful suction cup and a tilting kickstand support which are made to capture most of the light, charging your device through an USB plug. This travelling gadget cost $40 on Quirky’s website. 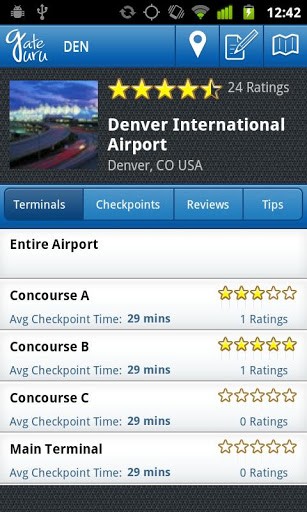 GateGuru is a special application for air travelers which offers information about 98 U.S.A. airports and 124 worldwide. This application permits the user to create itineraries for his flights with simple methods, such as searching for the flight number or more complex methods, such as emailing the schedule right to the app.

The home screen of the application will offer information about current or future flights. From here, accessing AirporCard will show the nearest airports or search for the desired one, using the search bar. Through the last option, users can be provided with all the information that somebody needs about an airport, including traffic maps, weather forecast, airport tips and so forth.

One of the other sections of GateGuru is the JourneyCard which offers detailed information about your itinerary, such as flight delays, security wait times, gate changes or time adjustments. Also it has a car rental section from where anyone can reserve a car at a discounted price with only 2 taps on the screen.

GateGuru can even point the direction of an ATM, a place to enjoy a coffee or a good restaurant where you can have your lunch. Some of these are accompanied by user reviews, rankings and pictures. To sum up, this app is a must have for every traveler and it comes as free to download for Android, iOS and Windows Phone.

How many times did your pocket burst with receipts? While traveling, you can get a pile of receipts from restaurants where you eat, from different attractions or shows you attend and as a business traveler you also know that it is necessary to return all those receipts so you could get your money back.

NeatReceipts is a portable scanner especially designed for portability and scanning receipts, business cards and documents that have maximum dimensions of 8.5 x 30 inch. All scans are stored and secured onto the scanner until they are downloaded with the software provided by developers.

A very nice feature of the software is that it recognizes important information from scans and directly organizes it. Also, it offers the possibility to create tax reports with your scanned data and export it as a PDF, Excel, Quicken or TurboTax document.

This scanner can be bought for $179.95 with a 30 day free trial on NeatCloud. For the cloud system, developers created applications for Android and iOS devices from where you can access files and even scan them using the smartphone. 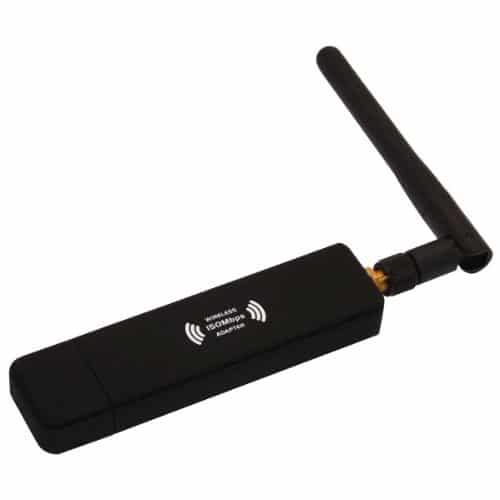 When travelling, you have to stay at many hotels and the Wi-Fi quality may not be as good as expected. Internet access keeps people connected with their family, colleagues, their boss, and nowadays is almost compulsory in everybody’s life, so a Wi-Fi booster may come in handy.

Practically, a Wi-Fi booster is an antenna which attaches to laptops, in order to intercept better Wi-Fi signal. It will strengthen the received signal and create a better connection between laptop and the internet provider.

Protronix Wireless LAN Wi-Fi Adapter is one solution of this kind that offers great wireless connectivity, high performance and high-speed internet access. It is equipped with a multi-directional antenna and can transfer data up to 150 Mbps, so that a better and faster connection will be made. This Wi-Fi booster is compatible with all major operating systems (Windows, Mac OSX, Linux) and can be bought for only $12. 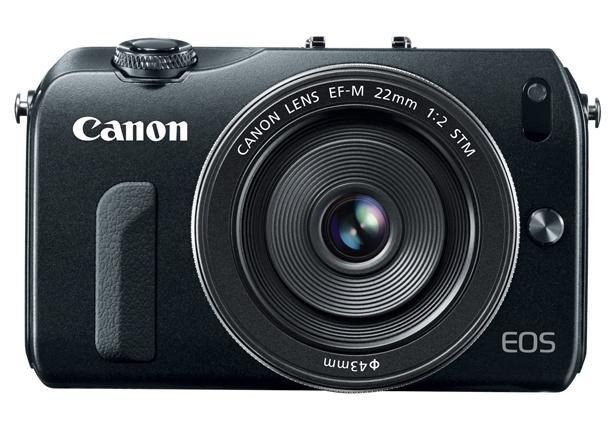 Even though the travel has been initiated with a business purpose, visiting the foreign city is a mandatory task. Canon EOS M is a mirrorless camera that provides the occasion to take all favorite photos at DSLR quality, but using a smaller camera. The mirrorless cameras have appeared last year and they are basically digital cameras without the mechanical mirror system inside of them.

The body of this camera is so small that you can even slide it in your pocket and, considering that it is hiding an 18 megapixel image sensor that records video at a 1080p quality, you may think that it is one of the best choices when travelling.

More, the camera has a manual exposer, a built-in stereo microphone, and a very nice feature which lets you take snapshots while shooting a video. Furthermore, the maximum standard ISO available is 12 800, while the expanded one is 25 600.

The camera has a beautiful 3 inch touchscreen display which borrows some abilities from smartphones, such as swiping to scroll through photos and pinch-to-zoom. All of the magic is happening thanks to Canon’s latest image processor, DIGIC 5, which is six times faster than its forerunner.

Some of its deficiencies are the lack of internal flash, slow auto-focus and the limited options of lens. You can buy it from here at a price of $599.99. 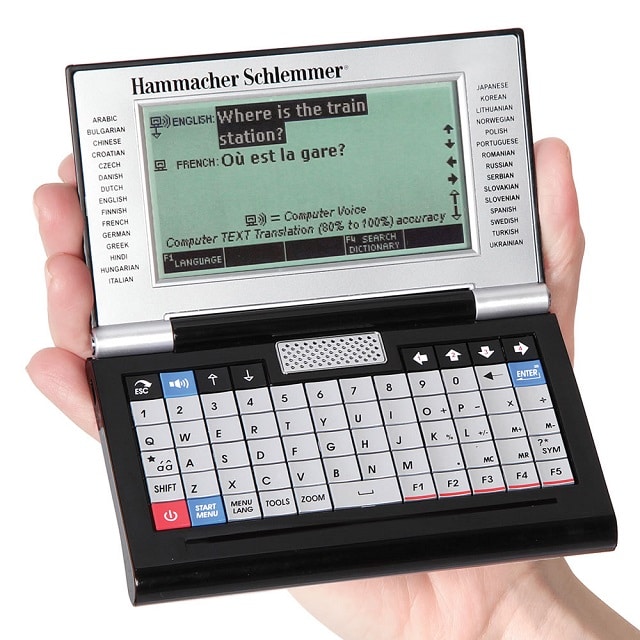 It is tough to travel to another country and to manage to get along with natives. Even if the staying takes only two days and you want to eat in a traditional restaurant rather than at the hotel, you need to understand their language. In this situation, the Hammacher Schlemmer 30 Language Talking Translator is the best solution for you.

This translator can articulate over 210 000 phrases and 1.8 million words from 24 European languages, three Asian (Chinese, Japanese, Korean), Hindi, Arabic and English, thanks to using the New Oxford American Dictionary.

About the size of a smartphone, this translator can fit in a pocket and the 3.75 inch backlit LCD can show searched words or phrases, their pronunciation and using two integrated speakers and a vocal engine, words can even be spoken-out loud.

YP Local Search & Gas Prices is an application that can be seen as a direct correspondent of Yellow Pages for mobile devices. It will find everything that is close to you in a flash without having to search it manually. Having over 18 million businesses, one can search and find almost everything, including as restaurants, mechanics, hotels, dentists and so forth. Moreover, the application can also find the cheapest gas prices nearby.

This tool can also help to locate coffee shops, bars or pizza places and it can even search for places with a Wi-Fi hotspot. If another location is desired, just enter an address or a zip code and the results will change.

The application is free to download for Android, iOS, BlackBerry and Windows Phone devices, but unfortunately the latter doesn’t come with Gas Prices integrated.