How to Make Movies Straight From a Smartphone/Tablet

One thing is clear, phones and tablets don’t represent the best devices to shoot movies, they are used either because they are always in your pocket or because of directorial choices. Nowadays, the market is flooded with cheap video cameras that can surely beat the specifications of a simple phone or tablet.

Even though the quality is not so great, the best advantage of using phones or tablets to shoot videos instead of professional cameras is portability, and the possibility to add effects, edit and combine different movies directly on the device from which they were taken. With those in mind, we will present some gear and applications that will help you shoot a film in better conditions.

Make movies with your phone or tablet 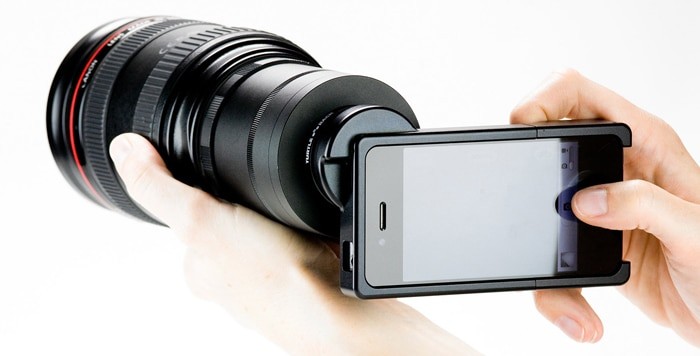 Creating a movie with a portable device it’s something that encountered a lot of skepticism until the South Korean filmmaker Park Chan-Wook made “Night Fishing”, a movie captured with an iPhone 4, and won the Golden Bear for Best Short Film at the Berlin Festival. Moreover, a special contest for this kind of movies named iPhone Film Festival takes place annually.

Whether it is an Android or iOS device, shooting videos is quite simple with the help of some applications and accessories. 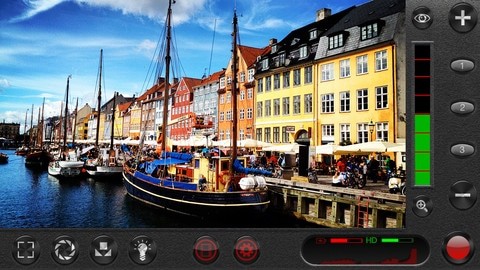 FiLMIC Pro is an application for iPhone and iPad users that transforms your device into one professional video camera. This is an award-winning application that offers a big amount of settings for controlling the quality of the movies.

This app has three important features that take your iOS device to next level, such as manual control of exposure, focus and white balance. Usually, these are automatically set by phones or tablets, but with this app all those annoying default settings will be eliminated.

Tweaking can be simply done by opening FiLMIC Pro and under “Settings”, change the “Reticle” option to “Double”, which will allow manually controlling the exposure and focus. After that, a blue box reticle and a green one will appear (focus and exposure) and you will have to move them on the screen, to choose where your device does auto-focus and to choose a light sample for the exposure.

Also, in the settings area users can choose to film a Full HD 1920 x 1080 pixel resolution movie, but this will drastically occupy a lot of important storage. For a better proportion of the quality and amount of storage, it’s better to choose the HD 1080 x 720 pixel resolution, which will also offer a good quality but without occupying huge amounts of storage.

Overall, FiLMIC Pro is a complete application that can transform your device in a super video camera with only some taps of the screen and it’s sold on iTunes at only $4.99. 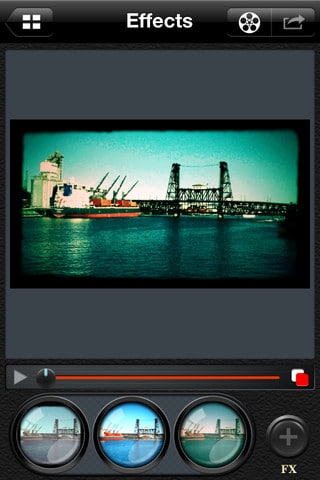 CinemaFX for Video is a new video FX application made by Nexvio which will add that special effects to videos. This application lets you add beautiful effects and different colorings to your videos, made either with your device’s camera or recorded directly within the app.

The interface is very simple to use and right when the app is opened, you will be asked to select the desired video to edit. A few seconds are needed for processing and the main workspace with the FX+ button will appear. Once pressed, a new menu will appear with four settings categories: Essential, Cinematic, ToyCam, and Vintage.

In the Essential category you will find the most important features (Exposure, Saturation or Widescreen features), while in other categories other 50 effects and are present. The incredible thing that CinemaFX for Video permits is the capability of adding three different effects at the same time on a single movie frame.

After an effect is chosen, it will be shown at the bottom of the screen. To change its settings, just tap on it and after doing all modifications, press on the green tick to save all changes. In addition, two more sets of effects can be bought and added to CinemaFX. 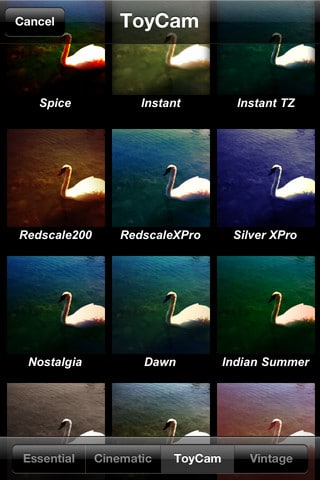 Once the editing is done, press on the “Movie Reel” button which can be found at the top of the screen to render the video. Depending on how many effects were added and the quality of the exportation which is maximum 720p, it will lead to very long times of execution so, this should be done at home, when the phone is charging.

However, with this application the users cannot trim or cut videos so that future editing should be continued in other software, such as Apple’s iMovie. In brief, CinemaFX for Video is one of the best applications one can have and it is sold at only $1.99 on iTunes.

Unfortunately, not a single Android application was worthy enough to be listed between these titles above, which can truly change the properties of a simple smartphone camera. Even though some names exist on Google Play, they have thousands of bad credits and people describe them as a loss of money. Frankly, Android still has to learn on this chapter. The only decent way of tweaking movies captured with the camera found on any Google-branded devices is with the use of a classic video editor.

Another tactic would be to make use of some accessories, like these: 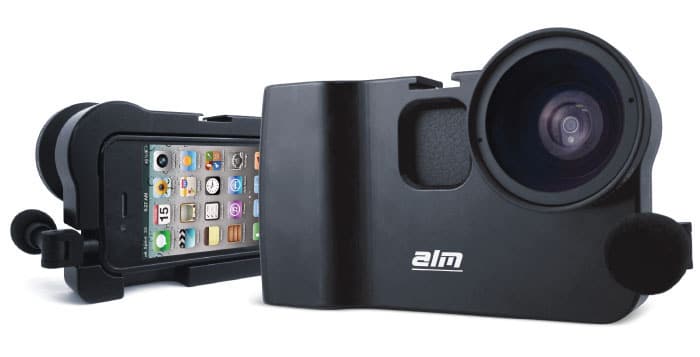 Steady your phone with ALM mCAMLITE Stabilizer Mount which is the ultimate accessory for the iPhones 5. Its construction is made from aluminum and offers a wide variety of accessories, such as a cold-shoe, holes for attaching it to a tripod and different mounts. This support is a must have if you are planning to shoot your next movie with your iPhone. It has a proper grip and weight to stabilize the device so that it will prevent falling.

In the interior, where the iPhone is placed, the aluminum case is coated with silicon so that the device will be protected from shocks and scratches. Unfortunately, it’s rather difficult to get the phone out once mounted.

When buying ALM’ accessory, it will come also with a microphone which can rotate up to 180 degrees and a set of 37 mm Wide Angle/Macro Combo lenses. These accessories are ideal for videographers because they will offer better audio quality and more shooting options.

Also, the lens set is interchangeable so that the user is able to change it with others that might be suite their preferences. The entire package can be bought with $ 123.95 from the official store. Moreover, there are other alternatives that can do the same thing: 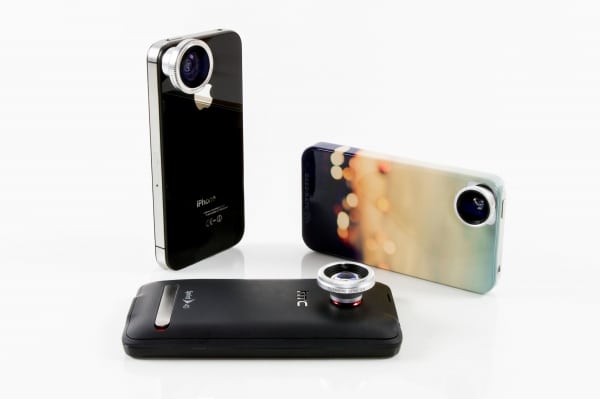 The Photojojo Phone Lens Series includes three different lenses: Fisheye, Telephoto, Wide Angle and Macro Lenses. The support is made from solid aluminum and the lens from high-clarity glass. Every lens is manually inspected to ensure the best quality of the product.

All three lenses have very different capabilities. While the Fisheye Lens will create a rounded, hemispherical image, the Telephoto Lens will give a boost to the zoom of your device. Wide Angle/Macro Lens are basically 2 in 1 lenses because if the Macro ring is mounted it will create beautiful close-up photos and if it is removed, it will expand the view of the camera.

Every package comes with adhesive metal rings which will be placed over the device’s camera and the lens will magnetically attach to them. They also have special metal rings for the new iPhone 5 that will not block the flash of the camera or the back microphone.

The Photojojo Phone Lens Series are compatible with almost every iOS, Android or BlackBerry device that has a camera. They can be bought as a package at a price of $49 or each from a starting price of $20 from Photojojo site. 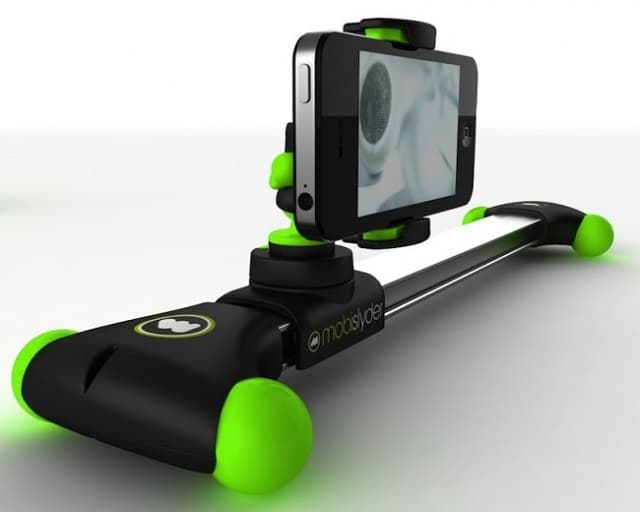 MobiSlyder is the only camera slider especially designed for mobile devices, small cameras or camcorders. Basically, this accessory is a dolly that glides on a track offering the sensation of movement, but in the same time reducing shaking.

MobiSlyder is a beautiful, stylish and compact accessory that can be carried around even in a backpack that will allow creating captivating videos directly from a mobile device. It has 5 different mounting positions and other numerous ways of attaching.

Besides Mobyslyder, the package also contains an articulated mount, mobile device mount, ¼ standard mount, ¼ ball mount and an adhesive ball mount. It is compatible with all Apple iPhones or Android phones and it is very easy to use.

A big problem for videos made with phones or tablets is represented by the sound that is not at the same level with the video capabilities. So a microphone is needed when trying to shoot a video with a mobile device. iRig mic is one of the best solutions for this problem, it’s ideal for recording songs, speeches or other kind of performances.

This microphone is very easy to use, just connect it through the jack and select the desired level of sound: low, medium and high sound pressure sources. This also can be connected as an input to mixers, powered speakers or amplifiers thanks to its stereo mini-jack output.

This accessory has the familiar form of a regular microphone so that it can be held in hand or placed on a standard microphone stand. It’s made from metal and reproduces high-quality, clean voices even in noisy environments.

iRig mic is compatible with a lot of powerful free applications for singers and songwriters, such as iRig Recorder (iOS and Android devices), VocaLive and AmpliTube. This professional microphone can be bought for $51.95.

Smartphone for Snapdragon Insiders: Qualcomm Teams up with…
iPad Pro M1: All you need to know about this monster new…
Could Realme Bring the Android Tablet Back from the Dead…
Is the new iPad Mini 2021 the only "Real" Apple Tablet?
Lenovo ThinkBook 15 Review: Lenovo's New Book will Make…
Wordtune is an AI-led co-writer that bolsters your writing…