Tired of waiting in front of big queues when all that you want is to pay your bills? Tired of being late with payments and being forced to pay extra fees because of this? It’s time for a solution that can keep track of the bills’ due dates and remind users of them.

So, what’s better than to charge this important mission to your smartphone? Developers created a lot of applications that can track finances, pay bills, remind users that the due dates are coming and a lot more. Some of these are presented in the following lines so read on to discover the best applications that can help users to pay and organize bills. 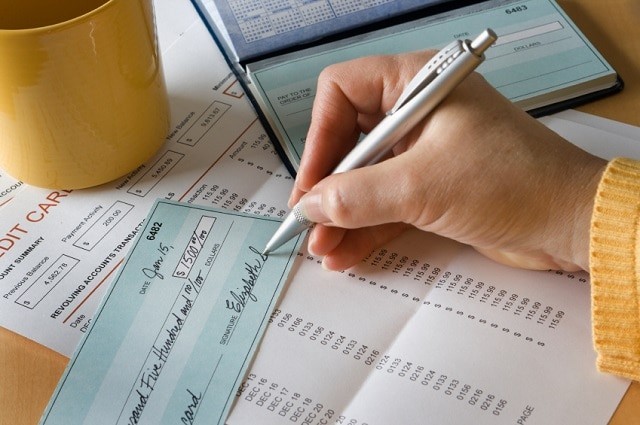 Nowadays, time is the main issue and when this vital resource becomes more important than ever, you hardly have time to manage and organize your bills properly. Being so busy all the time, we have to find help in other places. That’s why, the following applications are important to every person that has problems in remembering things or wants to simplify stuff by paying bills directly from his Android or iOS device. 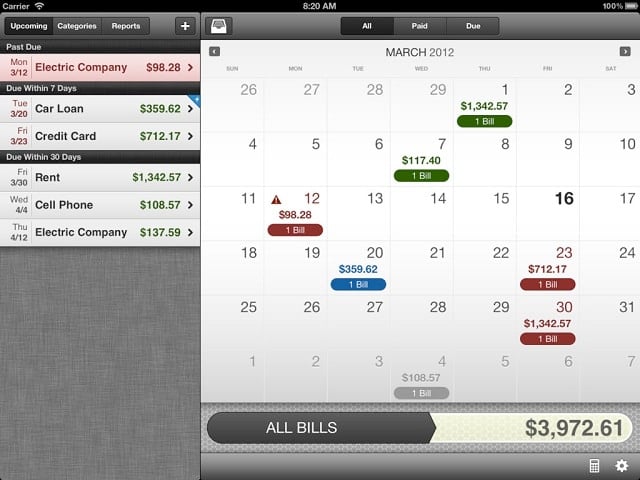 BillMinder – Bill Reminder and Organizer is one of the best applications that users can find on iTunes to track their finances and pay their bills. It’s included in the “Staff Favorite” and “What’s Hot” tops over all categories by Apple’s editors, because of its large number of features and of its simplicity.

Basically, this application works like a reminder which alerts users when they have to pay their bills, a schedule made using the due date. Its key features are: reminders, synchronization between all platforms, customizable bill list, security and complex charts and reports. Also, the application allows to link with DebtMinder or PocketMoney accounts for users that already have one.

Furthermore, BillMinder permits users to set to auto-pay their bills or to have multiple pays on the same bill. All of the due dates can be seen on a nice calendar through the app or exported on a CSV format to synchronize it with your favorite e-mail account.

BillMinder – Bill Reminder and Organizer is an especially designed application for iOS devices that can be downloaded from here for iPhone, iPod touch, and iPad. 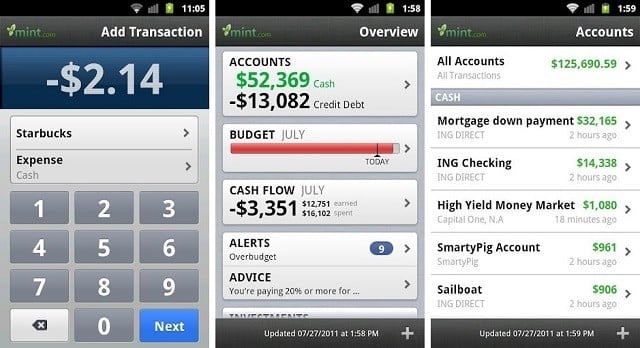 Mint.com Personal Finance is an award-winning application  used by over 10 million persons to manage their finances. To start it, owners only have to add their credit card and bank information and Mint will do the rest.

The application will automatically organize all transactions in order to offer a clean solution for managing your money wherever you are. Also, it synchronizes between all devices and in case of losing one of them, users can always log-on on Mint.com and deactivate that particular device.

Besides financial tracking, the application provides a service that reminds users when they have to pay their bills. It can save users from paying extra fees in case of missing a payment by sending e-mails or messages to remind that the due date is approaching. Also, in the main-menu of the application, in the timeline area, it shows upcoming bills so that users can schedule their payments.

The application can be bought for $1.99 and it can be downloaded for Android and iOS devices or from the official site using the browser. 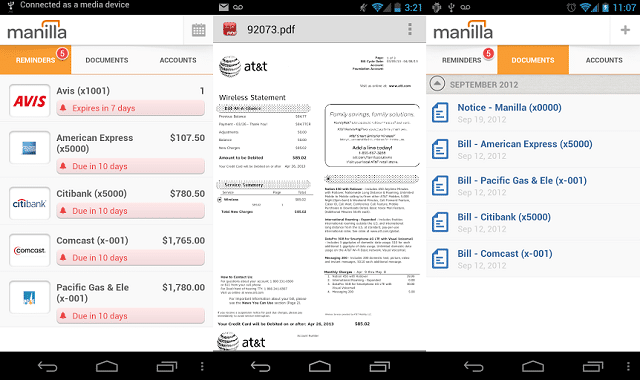 Manilla – Bills and Reminders is an application that was presented as one of the best new-entries in the finance category by ABC News and Today Show. It’s a sleek app which reunites and organizes all finances, accounts, bills in only one place. An important thing about it is that it’s owned by Hearst Corporation, one of the biggest media and information companies.

The application has a large number of features, such as an account manager, a bill organizer, document cloud service and more. Also, it doesn’t save any information about users’ password or other private stuff so that privacy will not be affected. Furthermore, security is one of their first priorities, the application being regularly tested by well-known companies such as McAfee, VeriSign or TRUSTe.

In addition, it offers a service to remind users when it’s time to pay their bills. All users have to do is to register the due dates of their bills and the application will alert them by e-mail or message. Besides creating a single place where you can find your bills, Manilla has a great ability that permits people to pay bills directly through the application. If you install it, you can be sure that you’ll not forget about a bill anymore.

The application is free and it can be downloaded from Google Play Store, iTunes and Amazon for Kindle Fire. 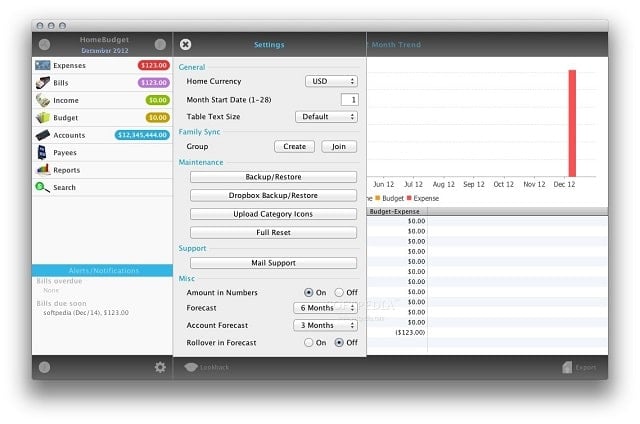 Home Budget with Sync is a special application that was designed to help users around the world to track their expenses, account balances and remind the due dates of their bills. It’s an application that offers support in order to cut the expenses and it’s able to create graphs and charts from the data that was acquired in that particular month.

It has a lot of different capabilities, but the far most important are: Family Sync, Widgets, Reports, Categories and Budget. The Family Sync service permits the synchronization between different devices, so if your wife and kids are updating their stats, it will change the family incomes and expenses in just seconds.

The application has great features for bills too, from creating new bills to e-mails or message reminders for the payment. In order to make everything easier for users, all of the bills are shown in a nice calendar or list view. Furthermore, the application permits direct payments through the app and track them by Payee.

Those interested can buy the application for $4.99, compatible with Android and iOS device or Windows and Mac based computers. Also, developers offer a free variant that comes with same features, but a limited number of expense and income entries (links for download from Google Play Store and iTunes). 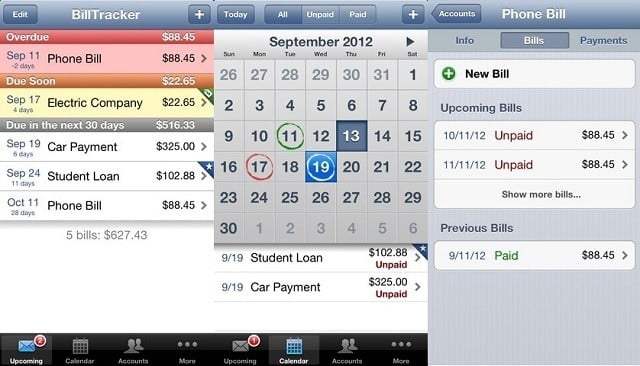 BillTracker is like a money manager that tracks all of your bills, from the electricity bill to the leasing rate of your new car. It can help users to manage all of their payments in only one place through a nice designed and easy-to-use interface.

The application is able to do lots of stuff, such as to export data about the bills in a CSV format or to change the currency of the payment. All of the bills that were paid are saved in the history along with their due date, amount of money, confirmation code and more.

The great thing is that it permits to create a repetitive reminder of the due-date, especially when it’s about recurrent bills. A good example is your Internet payment, because every month it’s about the same amount of money. To simplify this, users can create bills that are automatically added every month.

A nice thing is that developers put a big importance on the security aspect and they permit users to create a security code in order to access the application. BillTracker is available only for iPhone users for a cost of $1.99 and it can be downloaded from Appple’s app market, iTunes.

Also, you should try Check – Bills & Money which is the formerly known Pageonce.

Was this article helpful?
YesNo
TechPP is supported by our audience. We may earn affiliate commissions from buying links on this site.
Read Next
12 Best Free PDF Readers for Windows and Mac in 2023
#Best Apps #Productivity Apps