Where to Buy and Sell Cheap Blu-Rays

Video quality is growing day by day, and with new technologies like 4K TV making their way to the market, today’s high-end video standard, Blu-Ray, is rapidly getting affordable for most users. While these players and discs were very expensive 1-2 years ago, nowadays you can pick them up for only a few bucks.

If you’re a movie aficionado, then buying your favorites in Blu-Ray format for a fraction of what they used to cost will be a treat. Also, if you’re just now diving in the world of high definition video, and you’re in need of a good Blu-Ray player first, know that you can find some models very cheap. Today, we’ll be taking a look at some of the best places to find cheap Blu-Rays, both movies and players and we will also compile a short list with website where you can sell your Blu-Rays

Where to Find Cheap Blu-Rays

While not all Blu-Ray movies are cheap, there are many that you can find on different retailers and websites for as little as $10. Also, keep an eye out for deals, as many websites offer users the possibility to get significant discounts on different movie titles all year long. Here are some of the places you can search for great Blu-Ray movies or just blank Blu-Ray deals: 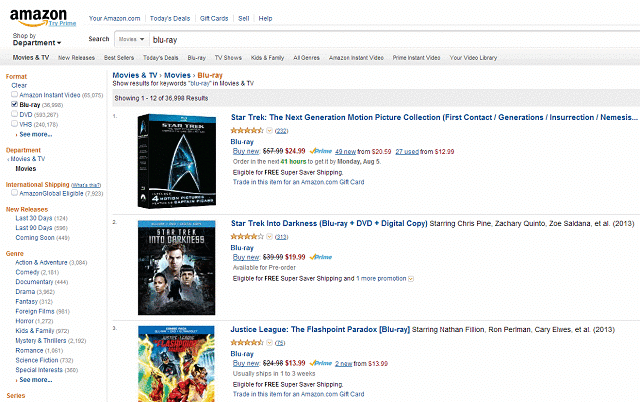 Amazon offers all kinds of products for its users, and among those products, they can find quite a nice list of Blu-Ray movies. Granted they are not all at discount prices, you will find some that are, or even used movies that are a great shape.  Even saving a few bucks on each movie you buy will help in the long run, so don’t forget to take a look at Amazon before you buy from somewhere else. 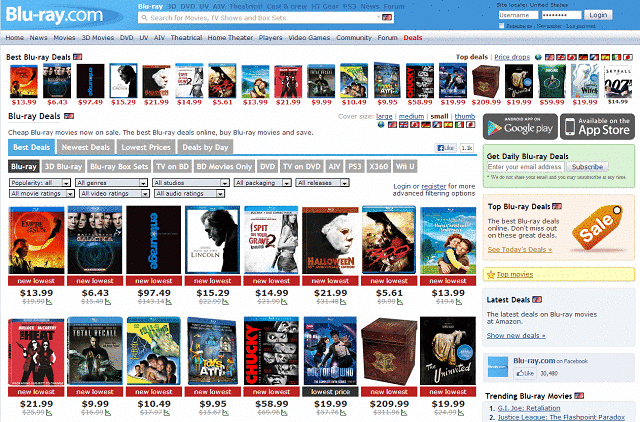 This website is where you should look if you’re interested in finding good deals on Blu-Ray movies. It automatically searches for the lowest prices and gives you a complete list of cheap Blu-Rays you can buy. Also, you can filter your results and view ratings for movies before you buy them.

Once you’ve found your movies, clicking on Buy Now or Pre-Order will forward you to the website that sells it (which is usually Amazon). 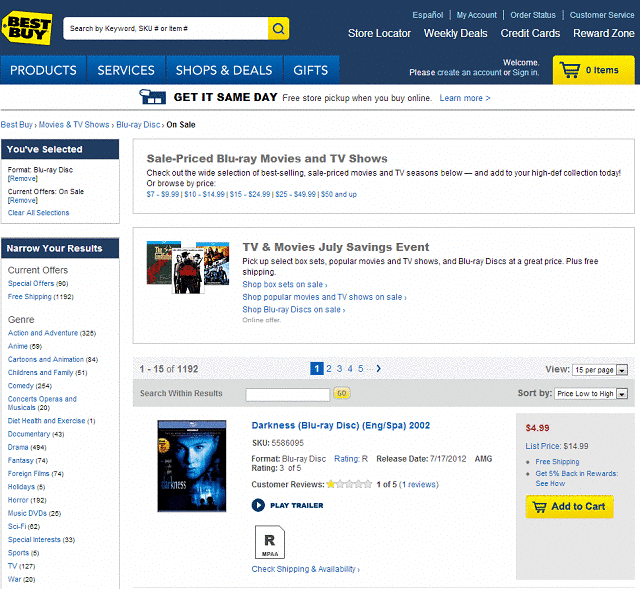 Best Buy is well known for the prices that it has, and thousands of customers take advantage of this fact to populate their homes with pretty much anything. Needless to say that Best Buy also offers discounts for Blu-Ray movies, and if you’re planning on starting a collection, then you should take a look at what they have to offer. While the number of Blu-Ray movies on sale is not as big as in other places, you can still find some great titles. 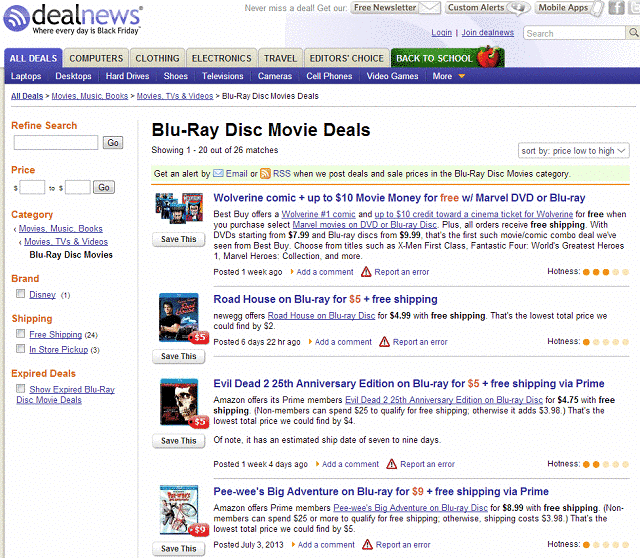 Another website that scouts the Internet for the best deals on Blu-Ray movies is Deal News. It saves you the time to search on different retailer websites or online stores and you can quickly find good titles at bargain prices. Also, it takes into account shipping fees, showing Blu-Ray movies that have free shipping, so you won’t have to pay extra for what you want. 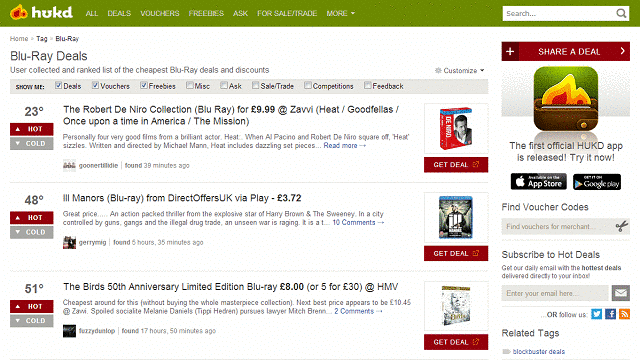 UK residents who want to start off their Blu-Ray movie collection with some of the best prices will enjoy scouting this service for the cheapest Blu-Rays possible. The website’s simple and intuitive user interface allows for easy searching and buying of Blu-Ray movies. Also, users can rate deals and make them easier to find by others or vote for them so the best deals will be shown first. 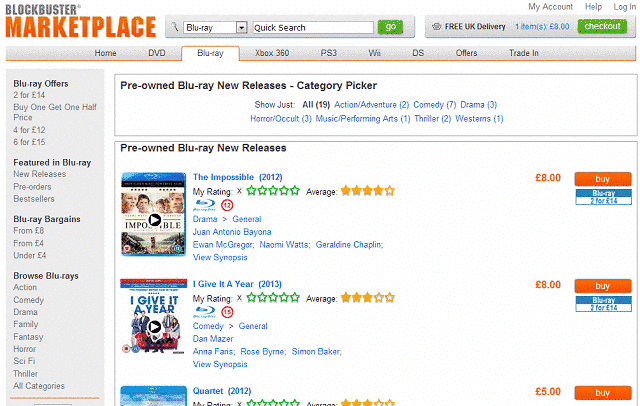 Not to be confused with the old Blockbuster movie store, this service allows users to buy Blu-Ray movies at bargain prices directly from the website. It has a pretty decent collection that users can sort by price, which can be as low as £2.99. The store sells current titles and also allows pre-orders for movies that haven’t been released in Blu-Ray format yet. Filtering movies by genre is also supported, for those that like a particular genre. 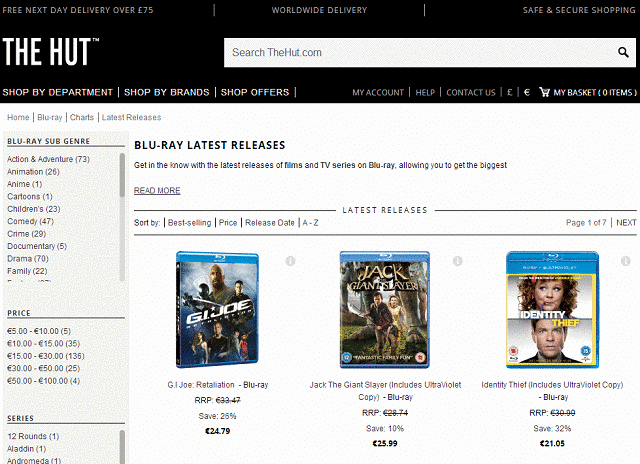 With Blu-Ray deals ranging from 10% to over 30%, The Hut is a good choice for movie aficionados that want to complete their Blu-Ray collection with good titles, but at a decent price. It offers a wide range of Blu-Ray movies at good prices, and thanks to the website’s easy to use interface, you’ll be quickly making an awesome collection with next to no effort. 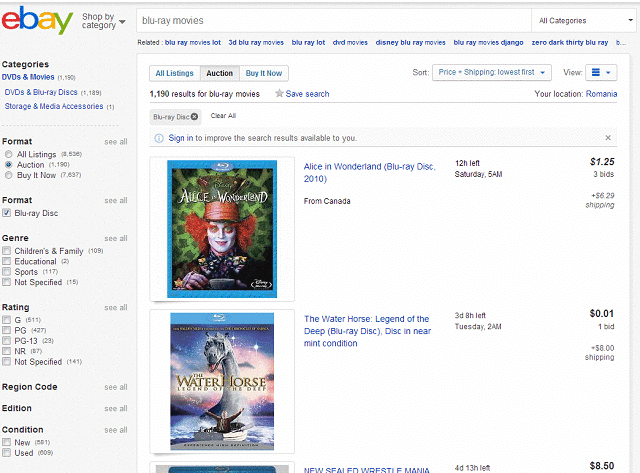 If you don’t necessarily want to buy your movies from a store, then you might be lucky enough to get some awesome deals on eBay. Even though most of them are used, you can still find very well preserved Blu-Ray movies for a fraction of what they usually cost in stores. But like with everything bought second hand, be careful from who you buy from. 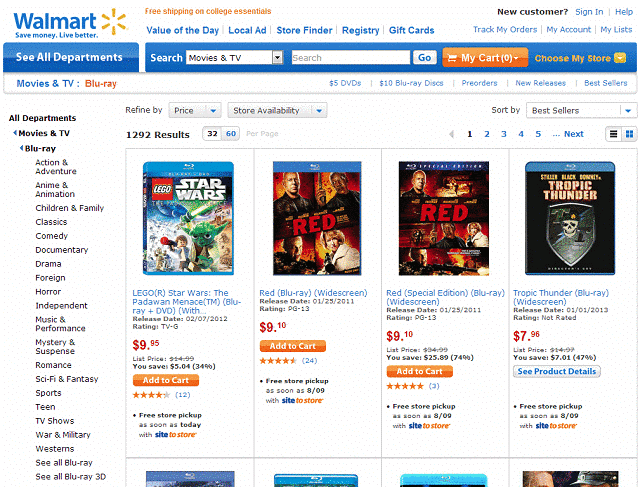 Like Best Buy, Walmart is one of the best known retailers where anyone can find cheap goods. One of those goods are Blu-Ray movies for under $10. Even though these awesome bargains don’t come to big titles usually, you might still have luck and find some good movies. Also, there are other deals that Walmart offers on movies, so be sure to keep an eye out. 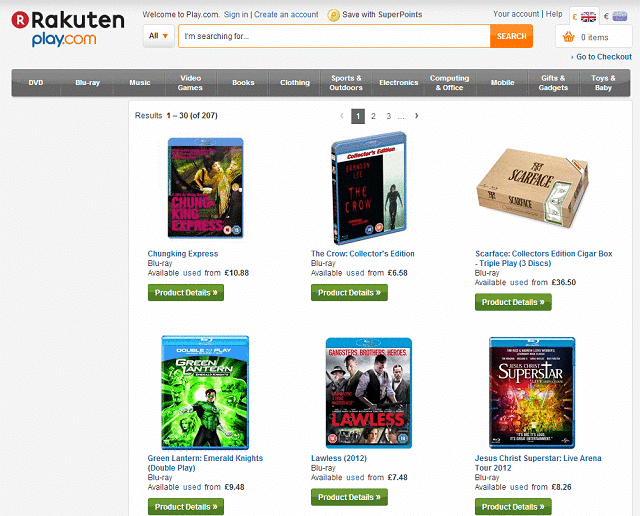 This service offers users the possibility to find new or used Blu-Ray movies for good prices, compared to other retailers. As with eBay, there will always be a risk when buying second hand goods, especially disk drives, which can be scratched, but if you are lucky, then you might end up with some great titles in your collection, and with money in your pocket.

Where to find Cheap Blu-Ray Players

Although the best time to buy electronics is on Black Friday or Cyber Monday, you can find places that have deals all year round. They offer decent products at reasonable prices, which is great for those who want to put together an entertainment system but don’t have the budget to go with top of the line products. Nevertheless, with a bit of searching, you will be able to find quite a few awesome deals. Here are a few suggestions of where you should look:

Where to sell your Blu-Rays

As promised, we will also help those that are looking to sell their Blu-Ray discs, which are most likely with movies. Of course, nobody can match the huge offer a website like Amazon has, but you have a better chance of getting rare Blu-Ray movies or even cheaper ones if you buy from individuals. So, let’s see where you can sell your Blu-Ray for an extra buck:

I often wonder, where is technology heading? What do all of these advances mean for us and for our future? I sometimes miss the days when I didn’t know how to use a floppy disk, or how a computer CPU works, but now, until I find an answer to my questions, I’ll keep tracking these advances and show everything I find to those who share my interests.