Microsoft is an American multinational corporation that develops, creates and licenses a lot of products and services in the computing field. It’s the biggest software maker worldwide when it’s about of sales and value. Microsoft Office is one of its famous products which is available for both Windows and Mac OS X  platforms since 1989 (and even on iOS or Android, sort of).

There are a bunch of different versions and lately, users can get access to two similar Microsoft products: Office 2013 and Office 365. Not many of them know the differences between these services and maybe neither do you, so we’re about to tackle each one and highlight their features, while lining up any worthy difference. 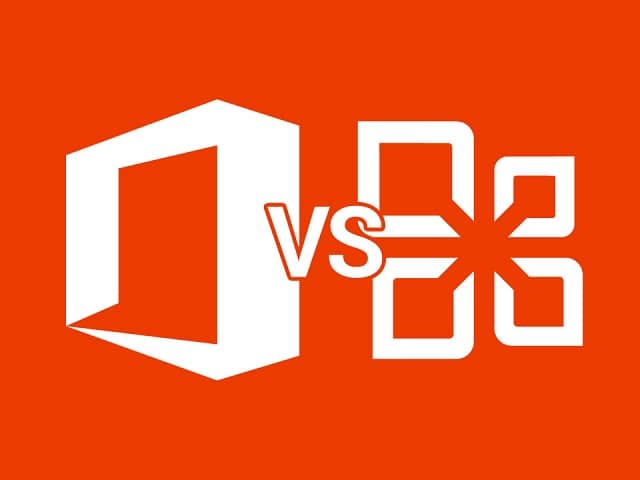 Microsoft Office is actually a suite of desktop applications, among which we can find the well-known Word, Excel, PowerPoint and Access applications. Through the years, the number of applications has grown significantly and now, the current version contains over 10 different products.

The main program in Office is Microsoft Word, a text processor, which is the most used application of its kind. It uses the DOC format which is the de facto standard of documents in Windows, although with the launching of Office 2007 a new format appeared: DOCX which is a XML-based format.

Excel is a spreadsheet program, PowerPoint is a presentation program and Access is a database manager and other programs complete the Office suite, like OneNote, InfoPath, Outlook, Publisher, Visio and more. But let’s take a plunge and see which one is included where. 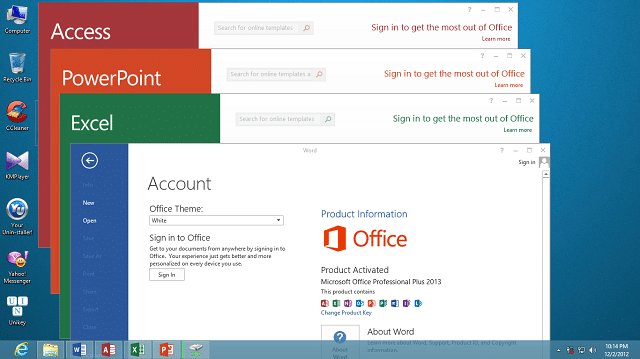 Microsoft Office 2013 is the successor of 2010 version and comes with a new retouched interface along with more features. With the latest version, Office became a more cloud-based suite of applications thanks to its integration with different online services, including Outlook, Flickr, SkyDrive, Skype and more. With a simple log in into the SkyDrive account, users can directly save their documents, presentations or databases on their personal cloud through the Office apps.

It was never easier to create, upload and share documents with colleagues or friends. Furthermore, depending on every user’s needs, Microsoft created three different application bundles: Office Home and Student 2013, Office Home and Business 2013 and Office Professional 2013. The differences between them are the programs that are included in the package and their prices.

While in the Home and Student bundle users will find only basic programs (Word, Excel, PowerPoint and OneNote), in the Home and Business will also find Outlook and in the Professional will be able to use Publisher and Access too. Also, the prices vary like this: $139.99, $213.99 and $399.99 for a life-time license to use on only one computer.

As a bonus, every user benefits of 7 GB of free cloud storage on Microsoft’s own cloud service, SkyDrive. Whether they are online, or offline, users can access their documents and personal stuff through the SkyDrive app. Furthermore, it’s possible to view, edit and share documents stored into the cloud account through any supported browser.

Office 365 works as a subscription online office software which offers a great variety of applications and services for up to five computers on the same time. It’s built around the Microsoft Office platform and it’s the successor of Microsoft’s Business Productivity Online Suite which has initially launched to provide e-mail, social networking and cloud storage to businesses.

The most interesting feature is Office on Demand, which permits a quickly download of a virtualized version of the most important apps (Excel, Word, PowerPoint, etc.) on a computer that isn’t yours. So, besides those five computers on which you can install Office 365 you can do this too, without extra charges.

As soon as the Office on Demand is closed, the service stops working. The bad thing is that it cannot be used on Mac, Linux or Chromebook computers, being compatible at this stage only with Windows platforms.

The good thing is that as a subscription member you will be always able to update and upgrade the programs, whatever version you already have installed on your computers. Also, as an Office 365 subscriber, you will get an additional 20 GB of storage on SkyDrive and 60 Skype world minutes per month.

With Office 365, users have a more varied palette of bundles, whether you are a simple student or you represent an enterprise, you will always find here the solution that fits best to your needs. Office 365 contains seven programs (Word, Excel, PowerPoint, Outlook, OneNote, Access, and Publisher) and for a regular account users have to pay $9.99 monthly or $99.99 a year.

For the other account types the prices start from $79.99 per year for a student account to $20 monthly for every user in the case of an enterprise account type. For a full list of business plans and features, you can check the Microsoft’s list here.

Which one is for you? 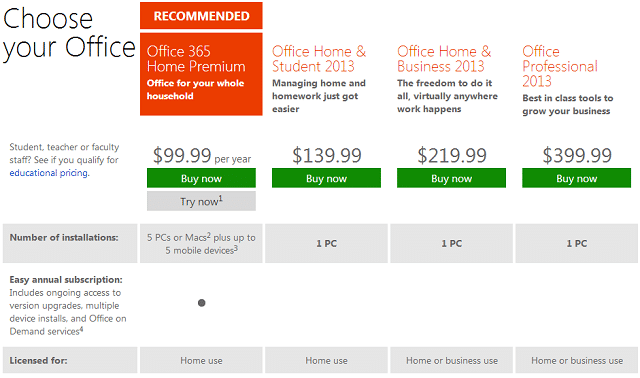 First of all, let’s begin with the similarities between Office 2013 and Office 365. The most important one is that both are designed to work with the latest operating systems, like Windows 8 or Apple’s Mac OS X.

While Office 2013 is compatible only with Window 7 and later operating systems, Office 365 has Office on Demand which can be accessed through Internet from every device and computer, even though it has a more classic platform installed.

In the same cases, they contain the same bundle of basic applications (Word, Excel, PowerPoint, Access, Publisher, Outlook, and OneNote) which have very modern and stylish interfaces that emphasize the users’ content. So, they cleared the unwanted things and they created a better and a more economic workspace for users.

Another thing that is in common is that both apps are cloud-based so that users can upload documents directly to their account. The programs are set to particularly work with Microsoft’s own cloud service, SkyDrive that offers a free 7 GB storage when signing in for an unpaid account type.

The main difference between the two versions is that Office 2013 is owned outright and Office 365 is only rented. While the second represents the assiduous work of Microsoft’s developers from recent years, the first one represents the latest version that continues the well-known series started over 20 years ago. And in that fashion, you have to pay for a new release each time.

With Office 2013 users buy a license to use and own that particular version of the application, along with the following associated updates. Having only one license the application can be installed on only one computer which can be a big disadvantage. It’s suitable if you are using apps from time to time and you are not interested in having the latest version of Office all the time.

On the other hand, Office 365 offers the possibility to use the suite of programs on up to five computers in the same time (regular account). This can be used very well for a small family business or to enjoy it on your laptop and computer in the same time.

All in all, at the end of the day it all depends on what you really want. If you only are a regular Word or Excel user you should go with Office 2013 Home and Student edition, but if you are a daily user of these applications and you need them on multiple computers you should think about which payment plan suits best for you in Office 365.

Was this article helpful?
YesNo
TechPP is supported by our audience. We may earn affiliate commissions from buying links on this site.
Read Next
10 Ways to Fix Photos App Not Working in Windows 11 [2022]
#microsoft #Office 2013 #Office 365