Lenovo announced a brand new Android smartphone, the Lenovo Vibe X, which comes with an impressive 5-inch display, a capable 1.5 GHz quad-core processor and a nice 13 MP camera. We went hands-on with this new flagship from the Chinese giant, and here are the first impressions. 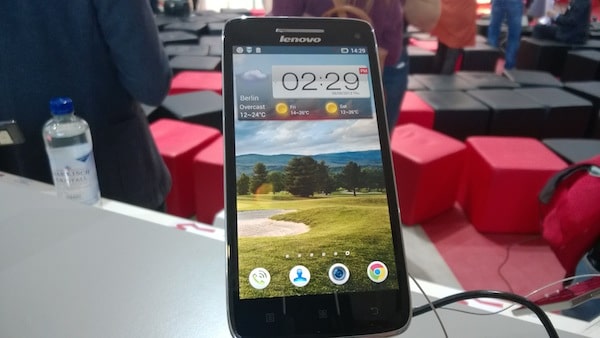 The design is pretty similar to the Lenovo S920 and other phones in the S-series. The backpanel is a polycarbonate plastic which doesn’t feel cheap, but not premium either. We have come to use and accept 5-inch phones these days, so in a way it doesn’t feel odd in hands. Also, being a phone just 6.9mm thin and weighing just about 121 grams helps Lenovo Vibe X a great deal.

Although we initially thought the Lenovo Vibe X to be a successor to the K900, an executive from Lenovo was quick to correct us that it’s not the case, and Vibe X is just a new phone in the S-series. The actual model number for Vibe X is S960. Now we know why it isn’t Intel powered and differs in the design language as compared to the K900.

In our hands on with the phone, the performance was a bit laggy and we were told that that the demo unit was not running the final build of the software and possibly that’s the reason for the lags. Personally, I’ve been using the Lenovo S920 for a couple of weeks now and it has no such issues, so I’d wait for the retail unit to arrive before making a definite comment on that.

Overall, the Lenovo Vibe X looked a very capable phone with a decent camera and a nice Full HD display. The build quality is above average and it feels pretty good to hold in hands. Lenovo hasn’t announced the pricing, but we expect it to be priced similar to or maybe a little lesser than the K900. It will launch in China next month, followed by countries like India, Russia and Indonesia in December.

Was this article helpful?
YesNo
TechPP is supported by our audience. We may earn affiliate commissions from buying links on this site.
Read Next
Lenovo Legion 5i Pro Review: Legion Or Legend?
#hands on #IFA 2013 #lenovo #Vibe X