As you may have already heard, Apple has just launched the iPhone 5c and the iPhone 5s. While the first device is nothing out of the blue, the second one, meant to be the company’s flagship for the year to come indeed hides some interesting components under the bonnet.

The first one and perhaps the most important is a brand new Apple A7 chip which integrates a powerful CPU and a GPU to match the computation. Besides being simply faster, this new-generation unit is the very first 64-bit chip mounted on a smartphone, opening a new age in technical battles and also, in development. [Update: Looks like, it was Huawei who had the first 64-bit smartphone, with Ascend D Quad, way back in February 2012]

The iPhone 5s also comes with an M7 motion sensing co-processor, which helps the phone keep a better track of all included sensors, like a gyroscope, accelerometer and proximity. Pairing this with iOS 7 optimization and a brand new API package will surely lead into application wonders.  Well, if you want to learn more about that aspect, follow us into this short journey.

Apple A7: 64-bit architecture on the go 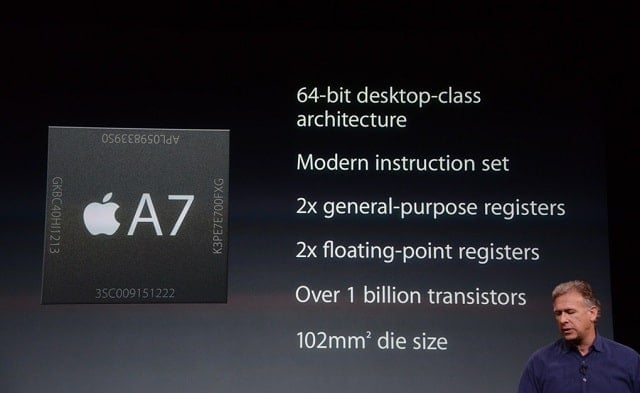 In regular desktop computing, a 64-bit architecture built processor has the advantage of a double address size, meaning twice the transfer rate at the same speed (in theory). There are several other advantages to a 64-bit architecture, most practically the ability to use significantly greater amounts of memory than conventional opponents.

Now, the Apple A7 chip mounted on the iPhone 5s is the world’s first consumer ARM-based SoC with 64-bit supporter. While Apple has been keen not to offer many details about the insides, we’re likely to see here an updated version of the Apple Swift microprocessor with ARMv8 support. We don’t know the details about the RAM on iPhone 5s and if it’s big enough to take advantage of the new 64-bit chip. But we think the most likely reason for moving to 64-bit in mobile today is getting developers to start compiling to 64-bit across desktop and mobile platforms.

Without a doubt a leap forward in mobile computing, the A7 is said to be twice as fast as its predecessor, a clear advantage which should be seen in both raw performance and graphic support. While official benchmarks are yet to be seen, Apple has taken the time to measure some numbers while playing the upcoming Infinity Blade III title. Supposedly, in some parts of the game, the A7 offers CPU boosts 42 times faster than the first iPhone and up to 56 times faster graphics. 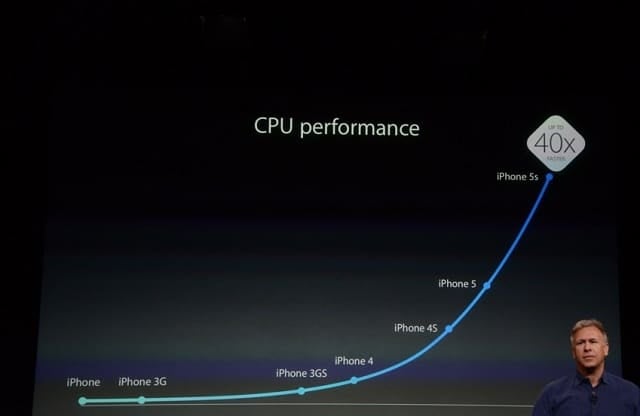 Now that’s pretty impressive for a processor that has 1 billion transistors packed together on the same size of the Apple A6 chip. For comparison sake, Intel’s Ivy-bridge desktop-class PC chips have around 1.4 billion transistors.

Another aspect that should be taken into serious consideration is the introduction of a brand new-gaming engine, which is able to run OpenGL|ES 3.0, just like the new Nexus 7. In simple words, this will allow developers to create brand new applications that can output serious quality, right from a mobile phone.

With that small question answered, only the most important aspect remains unsolved: will this A7 be faster than Samsung’s 8-core monsters at handling multiple tasks or in pure speed? I guess we’ll find out pretty soon after the phone launches onto the market. 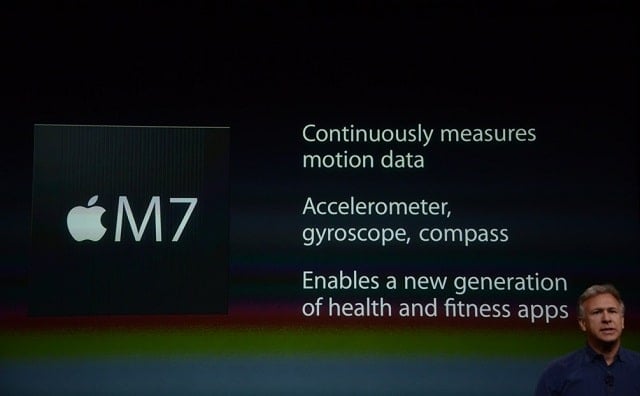 While the A7 is made purely for strength and speed, the  M7 motion-sensing co-processor is an intelligent companion which has the role of continuously measuring motion data from various sensors, including the gyroscope, compass, accelerometer and other.  This means that all this statistical duty has been taking from the main processor and migrated to another unit, saving tons of battery along the way.

Besides M7, Apple has also though of a new CoreMotion API for iOS 7, which should help developers make the most of the new generation and develop amazing content. Optimized based on contextual awareness, the co-processor works hand in hand with the API to collect data from the smartphone without being actually in use.

Speaking of apps, the first developer to have taken advantage of the new processor was Nike, with their latest Nike+ Move software. This package actively tracks the GPS throughout the day and gives users a clear image at the end of it. In that fashion, do expect more iOS health tracking applications in the near future.

Considering the early time of this stage, is rather dangerous to say that Apple has yet again doubled its standards over a year. But, with high hopes in mind, we can’t wait to see how this 64-bit machine fares against proper competitors and why not, even see one ported in the Android world.

Qualcomm, the gauntlet has been dropped.