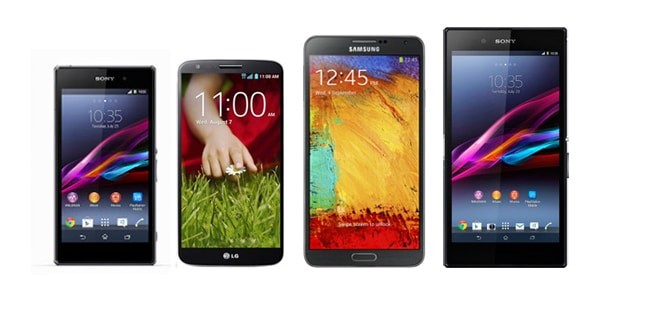 That’s an impressive list of phones, isn’t it? Qualcomm’s new flagship SoC comes with four Krait 400 CPUs at up to 2.3 GHz, Adreno 330 graphics, and the latest modem IP block with Category 4 LTE. Its ability to render real-time graphics is commendable. Out of the seven devices listed above, we had the opportunity to play around and review the mammoth 6.4-inch phablet from Sony, the Xperia Z Ultra for a few days last month. The device topped the charts in virtually every benchmarking test we did, including 3DMark, GFXBench and Antutu. We aren’t fans of benchmarking for gauging the performance of a device as a whole, but they do help us to know what the processor is capable of. The OEM still needs to tap and get the best out of the processor.

Qualcomm claims that Snapdragon 800 provides 75% boost in performance over its predecessor, the Snapdragon S4 Pro. In addition, Snapdragon 800 comes with lower power consumption thanks to newer PMIC and the newer modem block onboard. Of course, the OEMs have to optimize further to get more juice out of their batteries. For example, as Anandtech found out, LG G2 tops the chart in terms of battery life, beating the likes of Apple iPhone 5 and Samsung Galaxy Note 2. Higher performance with lower power consumption – that’s a deadly combination, isn’t it? 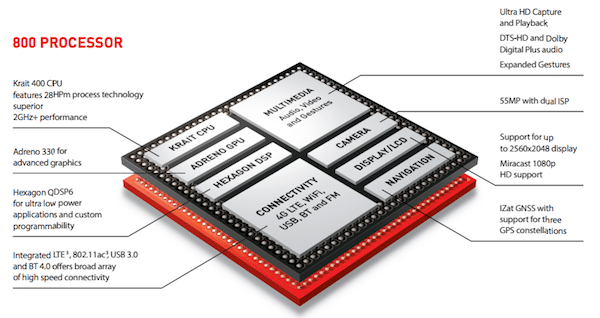 We all know how Apple has always managed to get the fastest ARM processor when it comes to graphical throughput in recent times, so it was a pleasant surprise for us to see Snapdragon 800 with Adreno 330 GPU overtake the Apple A6X processor in our GFXBench tests. Of course, Apple should have got back the mantle with their new Apple A7 chip which comes with the newly announced iPhone 5s.

The Snapdragon 800 (MSM8974) is capable of encoding UHD 4K (3840 x 2160) 30 FPS video at up to 120 Mbps H.264 High Profile, and is capable of playing back the same file. At IFA 2013 in Berlin earlier this month, we saw two smartphones which came with a camera capable of recording 4K Ultra-HD video – the Acer Liquid S2 and Samsung Galaxy Note 3, both of which are running MSM8974. Moreover, Galaxy Note 3 is capable of recording 1080p Full HD video at 60 FPS and 720p HD video at 120 FPS, great for slow motion videos. Also, for the first time ever, we saw a smartphone (Galaxy Note 3 again) coming with microUSB 3.0 support which should help faster data transfers and faster charging over USB 3.0 ports on PCs, thanks to Snapdragon 800.

MSM8974AB will ramp up the graphics output by a notch with Adreno 330 at 550 MHz as compared to 450 MHz on MSM8974, and is scheduled to be available in Q4 2013, with Xiaomi MiPhone3 being the first smartphone carrying it. We are really excited to see how the OEMs get the best out of the new king of Android flagship smartphone processors. For example, Snapdragon 800 is capable of supporting extremely high display resolutions (up to 2560×2048) and Miracast 1080p HD. It also remains to be seen how Tegra 4 from Nvidia will fare with its big.LITTLE quad core ARM Cortex-A15 CPU. Xiaomi MiPhone3 will carry a Tegra 4 version as well, so that should be an exciting fight we can look forward to!

Was this article helpful?
YesNo
TechPP is supported by our audience. We may earn affiliate commissions from buying links on this site.
Read Next
Snapdragon 782G vs Snapdragon 778G Plus: What Has Changed?
#qualcomm #SNAPDRAGON #Snapdragon 800