I saw a discussion on Facebook recently where one user compared his smartphone that doesn’t have an Internet connection with an old Nokia 3310, and the likeness is both funny but in a way, true. This got us thinking about how much data traffic we consume each month and which apps are the biggest drain on our monthly data allowance. This is one of the biggest problems for those of us who don’t have an unlimited plan and can’t afford apps that constantly connect to the Internet.

Apps like Facebook, 9gag, Dropbox, and others like them are pretty big data hogs, and sometimes they connect to the Internet in the background and consume those valuable MB of data. While turning them completely off isn’t a good option, we must find the next best thing and turn off cellular data only for certain apps so they work only over WiFi or at certain times. Today we’ll be investigating this aspect and show you some solutions for this program.

How to turn off cellular data for specific apps on Android?

Android users have at their disposal many apps that allow them to restrict background data to certain apps, as well as turn off their background connections from the settings of the device. Here’s how easily this can be done. 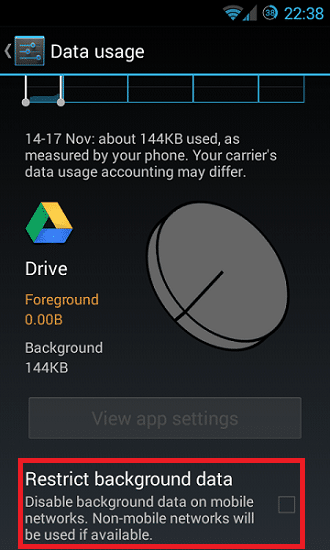 If you’re on a limited data plan, then you should figure out which apps consume the most data traffic, and this can be done very easy by going to “Settings” and then to “Data Usage” and scroll down. You will see a list of all the apps that have Internet access and how much traffic they make.

In order to turn off the background data for any of the apps in this list, tap on it, and at the bottom of the menu that opens, you will find this feature. Also, if you’ve used CyanogenMod Installer to flash the latest custom CyanogenMod ROM, this feature can also be found in the same place.

This approach has the benefit of only restricting background data, but when you open the app, it can still connect to the Internet. Also, this feature allows apps to connect to the Internet in the background when the phone is on a WiFi network, but if you want to restrict both cell and WiFi data, this option will not work, and you might want to look towards a dedicated app.

2. Use a dedicated app to restrict mobile data for certain apps

Another way to go about this problem is to use an app that will block mobile data for different apps. There are many apps that offer this functionality, and they can become your best friends when you want to save your data for a longer time. Most of these apps offer the same functionality, having a list of all the apps that need Internet access and two options, one to restrict cell data and one to restrict WiFi connectivity.

If you want to turn off cell data on specific apps, just uncheck the box corresponding to 3G connectivity, and you are all set. The Android apps that allow you to do this are as follows:

Note: Modifying features like restricting cell data usually requires apps that need root access, so be sure to root your device before installing them.

Of course, there are other apps that have this function, but these three were tried and tested by thousands of users (including yours truly) and have proven their functionality time and time again. Also, there are some Automation apps for Android that can offer this functionality.

How to turn off cell data for specific apps on iOS?

Just like Android users, iPhone users have complained about the amount of data that certain apps use in the background. In order to block background data on an iOS device, users must take a simple trip to the settings menu.

1. Use the dedicated feature in iOS 7

Apple has been kind enough to implement this feature into the newest iteration of their operating system. iOS 7 users can turn background data on or off from the settings. In order to do this, just run over “Settings,” then tap the “Cellular” icon. Here, you can turn on or off the 3G/4G LTE or Data Roaming functions, and if you swipe to the bottom of the screen, you will see a list of apps that usually connect to cell data. 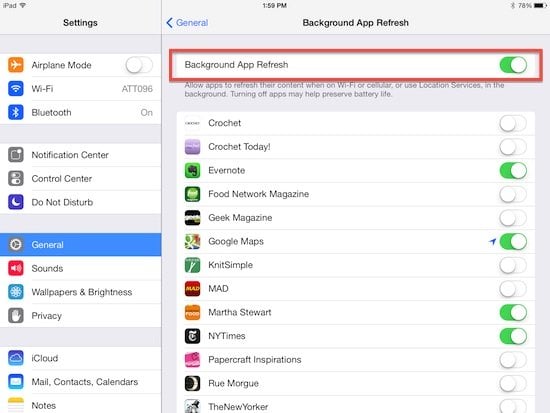 If you want to turn any of these apps off, tap the toggle that is next to them, and from here on out, they will not be able to connect to the Internet using cell data but will wait for you to open them or to connect to a WiFi network.

Although not too much data is spent on checking your email accounts, you can still save a few MB by turning this feature off. Your iOS device (iOS 7 or older) will sync your email, contact, and calendar on a regular basis, ranging from every 15 minutes to an hour. If you have this feature at the lowest setting, try turning it to “Manual,” and you might save up on cell data.

Modifying this feature is pretty straightforward, just navigate to “Settings,” then tap on “Mail, Contacts, and Calendars” and look for the “Fetch New Data” option. Tap on it and it will open a new window where you have different intervals that it should sync. From here, select “Manual” and you are all done.

Was this article helpful?
YesNo
TechPP is supported by our audience. We may earn affiliate commissions from buying links on this site.
Read Next
How to Change Your AirDrop Name on iPhone, iPad and Mac [2023]
#android apps #how to guide #iPhone apps